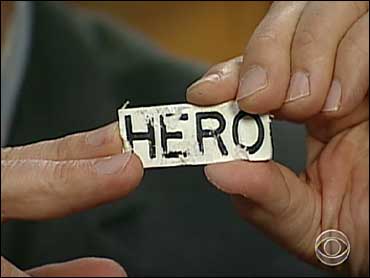 In the TV News biz - we ruin a lot of words. We find a word we like and we use it and misuse it - over and over - until just about all its impact is ground out.

One word that's become nearly meaningless in recent years is this one: Hero. And it's a shame because it used to be such a great word.

CBS News correspondent Steve Hartman said when he was a kid, a hero was an ideal.

Today, on the other hand, just about every soldier, civil servant and six-figure athlete gets called a hero. And although some may duly be - you sure don't have to be Superman to see right through the ones that aren't.

At the very minimum, to be a hero, I think you have to admit you took steroids before it shows up in the papers. Or no matter how much gold you win, you have to retain at least an ounce of common sense.

I think one thing we learned this week is that there's a big difference between someone who has a heroic moment - and someone who's a true hero.

When Captain Sullenberg landed that plane in the Hudson - that was a heroic moment. It made him the Michael Jordan of plane-ditching. But the way he carried himself on 60 Minutes - that was a hero in the making.

As long as he doesn't start partying with Michael Phelps, I think Sully deserves the title of hero. I think he deserves to be right there among the few, true, time-tested heroes who really define the word. Real heroes like Wesley Autrey.

"These kids today need somebody to believe in," Autrey said.

Autrey's heroic moment came two years ago when he jumped in front a speeding New York City subway train to save a stranger who'd fallen on the tracks. Wesley was a celebrity for a while - he got a mention in President Bush's State of the Union speech - and although the fame has faded, Wesley has never forgotten the responsibility of being a hero.

"It would have been in the paper, exactly," Autrey said. "When you've got kids looking up to you, you don't want to tarnish that image."

A hero only makes the news once.

"Yes, you don't want to tarnish that image," Autrey said.

Thank you, Autrey. Looks like the word's coming back already.