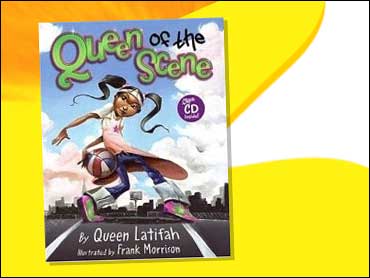 She's made hit records and has a movie career that includes an Oscar nomination, so it's not news that Queen Latifah is a versatile entertainer.

Now you can add "children's book author" to her growing list of achievements. "Queen of the Scene" is the title of the book, and the Queen who wrote it made the scene at The Early Show to talk about it.

Queen Latifah, who got her Oscar nod for her supporting performance as Mama Morton in the movie musical "Chicago" (2002), has written a story about a pint-sized star who believes in girl power and having fun. Whether the little Queen is beating all the boys at basketball or leading the crowd at the playground, she teaches kids to respect themselves, have fun, and take pride in who they are.

This isn't the first book she's has written, although it is her first book for children. "Ladies First: Revelations of a Strong Woman," a book designed to promote self-esteem among women, was published in 1999.

Here is the excerpt from "Queen of the Scene" that Queen Latifah read on The Early Show:

There's no one who can beat
My speed-of-orbit feet.
I never take a rest,
'Cause, baby, I'm the best.

There's no one who can top me,
'Cause I got game.
No boy or girl can stop me
In any sport you name.

If you're standin' on the sidelines,
'Cause you don't have heart,
Then get yourself right back here,
'Cause I'm takin' your part.

Yes, I'm representin' you and you,
So, baby, be serene.
When the action gets too tough,
I'm still queen of the scene.

For a closer look at the book at the publisher's Web site, click here.

Queen Latifah is set the play the role of Motormouth Maybelle in a new movie version of "Hairspray," based on the hit Broadway musical.

In her musical career, Queen Latifah had a ground-breaking 1989 debut with "All Hail the Queen." She has received four Grammy nominations, as well as a Grammy Award for Best Solo Rap Performance in 1994. Her most recent CD was "Queen Latifah — The Dana Owens Album," a collection of classics. She became the first hip-hop artist to be honored with a star on the Hollywood Walk of Fame, Jan. 4, 2006.

Her first television series, "Living Single" (1993 to 1998) was a hit, but she also has had a thriving movie career. With her partner, Shakim Compere, she owns and operates a production company, Flavor Unit Entertainment, based in New Jersey. They served as executive producers of such movies as "Bringing Down the House" and "Beauty Shop."

Every year, Queen Latifah serves as co-chairperson for the Lancelot H. Owens Scholarship Foundation, Inc. Established by her mother, Rita Owens, to perpetuate the memory of her son and the Queen's brother, the foundation provides scholarships to students who excel scholastically, but are limited in financial resources.