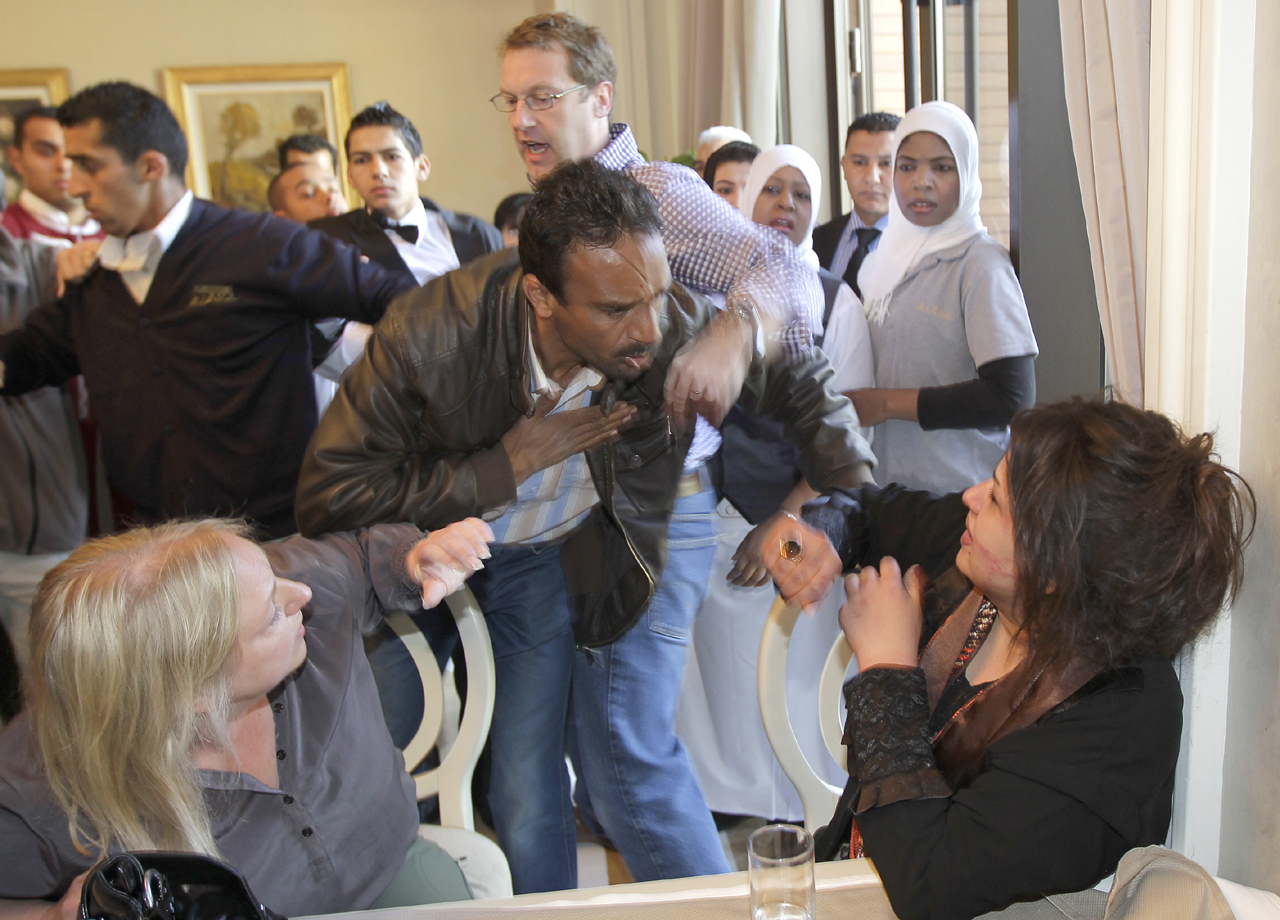 Others have used the wretched woman's name, but I'm not sure the publicity does her any good.

She's the one you may have heard of, who burst into the breakfast room of the Rixos hotel in Tripoli, where the foreign media are under virtual house arrest, and - in a voice halfway between screaming and a pleading - began to tell a terrible story.

She had been, she said, picked up at a Qaddafi militia checkpoint and held for two days being beaten and raped. She had - and she showed us - the wounds to prove it.

The regime minders, who had been spread around the hotel lobby keeping their ever-watchful eyes on us, charged at her like swarming linebackers, bowling reporters out of the way.

More shockingly (or maybe we shouldn't be shocked anymore), waitresses who had been smiling at us for weeks as part of the regime's increasingly clumsy charm offensive rushed for the poor woman, too.

One tried to put a tablecloth over her head. Another, in what seemed to be blind rage, reached for a knife and began thrusting toward the woman screaming "traitor." One of the minders drew his gun.

They tried to drag the distraught woman away, or at least out of the reporters' earshot. Many had run for their cameras and were recording the scene. Some of those cameras were grabbed and smashed to the floor.

Fights broke out. One reporter, an Arabic speaker who had been asking the woman questions, was tackled roughly onto the floor. A hotel employee (or was he?) who had been exchanging pleasantries in the elevator five minutes earlier, ran up to him and viciously kicked him in the ribs.

The woman was dragged off, jammed into a car and driven off at speed.

The regime's spokesman at first denied the incident had happened at all ... then claimed the woman was drunk or was unstable.

Later, after footage of the chaos had run on TV stations around the world, he changed his tune: She was being looked after and was under the protection of the state. Her complaint would be investigated. It was a legal matter, not a political one.

She seemed to think it was very political. She was from Benghazi, the city at the center of the anti-Qaddafi rebellion.

The official regime line is that a few gangs of criminals are behind the uprising and that the population, even in Benghazi, is still supportive of The Leader.

In fact, when it looked like Qaddafi loyalist forces would overrun Benghazi before the western airstrikes began, the regime promised the city's residents "liberation."

The beating of the woman, which happened before our eyes - and her earlier assault, which her wounds seemed to corroborate - prove the lie.

There may be elements among Qaddafi's supporters who fear change to the unknown, who have done very well, thank you, with the status quo, and who may even believe the fanciful rhetoric about Libya's unique system of direct socialist democracy called Jamahariyah.

But the evidence coming out of Misrata and Ajdabiyah and Zawiyah and Zuwarah - and out of the breakfast room of the Rixos hotel - suggests another story. Any expression of dissent here is met with the fist, and worse. Ask the waitress who reached for that knife.