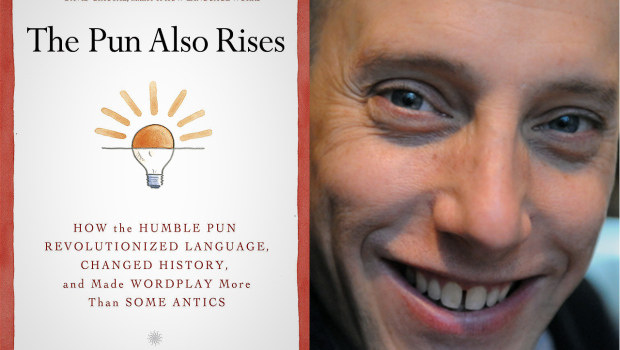 John Pollack: I have always loved wordplay, and especially puns. A couple of years ago, a friend suggested that I write a book about the world pun championship, which I'd won back in 1995. Initially, I resisted the idea because I conceived of the book too narrowly, in terms of humor, and nothing sucks the oxygen from humor faster than trying to analyze it.

But then I got curious and started asking myself bigger questions: Why do people everywhere around the world make puns? Why has punning endured for thousands of years? What do puns reveal about language and the human mind's ability to interpret ambiguity? How does the brain actually decipher a sound with multiple meanings? And what is the relationship between punning and creativity? Once I started asking these larger questions, I realized that there was a lot more to punning than most people think, and I set out to find some answers.

JP: In a general sense, I was surprised to discover the extraordinary complexity of something I had always taken for granted - our ability to make sense of language, and therefore the world, based on very fragmentary and ambiguous information. The human mind is an extraordinary machine when it comes to processing information. The more I learned, the more amazed I became.

I was also very surprised to discover that puns were a critical link - perhaps the critical link - that enabled the invention of the alphabet, which in turn made possible the rise of modern civilization. Prior to researching this book, I had no idea that our predilection to pun was so important in human history, and I was thrilled to discover that puns are a lot more than some antics.

JP: I can't imagine not writing (no matter what job I had) because good writing can help others share in your experience. But were I to have pursued another career, I would have loved being an astronaut, marine biologist or archaeologist - all of which involve travel and discovery.

JP: I'm currently reading several books, including Tristan Gooley's "The Natural Navigator" (about navigating without instruments), and Mihaly Csikszentmihalyi's "Creativity" (about the psychology of discovery and invention). I also strongly recommend my dad Henry Pollack's recent book "A World Without Ice" (about climate change), which was recently a finalist for the Royal Society Prize.

JP: I'm developing a series of workshops to help large organizations increase their creative metabolism, and am planning a trip along the ancient Silk Road, through China and central Asia.

For more on "The Pun Also Rises," visit the Penguin Group website.