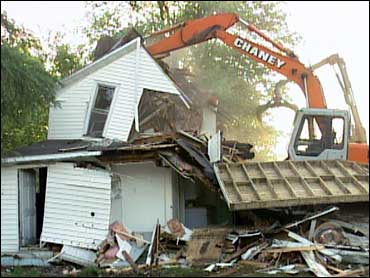 Structurally, there was nothing wrong with the house. Theoretically, someone could have lived there.

And yet on a recent sunny Saturday morning the town of Crandon, Wisc., did what it says needed to be done.

The night before the demolition a local American Indian tribe - along with priests, pastors and townspeople by the hundreds - all gathered to bid good riddance to their collective nightmare.

"As this house is demolished tomorrow we will chase the black cloud of darkness and despair surrounding it away," a speaker at the ceremony said.

"The memories are never going to be gone but the house will be gone."

"Are you going to feel better when it's down?" Hartman said.

"You have no idea," a young man said. "As soon as it is taken down, the sun will shine."

It all began last October when police were called to the house 18-year-old Jordanne Murray was renting. Jordanne and five of her friends had gotten together that night for a pizza party.

Not on the guest list: Tyler Peterson, a local sheriff's deputy and Jordanne's abusive ex-boyfriend. He showed up shortly before 3 a.m. with a rifle and a vengeance - killing all six and himself.

In the months that followed, the people of Crandon struggled with the loss - they buried their dead. But the reminder remained. It was such a haunting reminder, pastor Bill Farr says the community really had no choice.

"This is an infection, until you get it out you can't heal," Farr said.

But again, because there was nothing really wrong with the house, the owner couldn't afford to just give it up. So folks around town started collecting donations - selling candles and bracelets - and eventually raised enough to pay the man fair market-value for the house. They spent $72,000 just to tear it down. A catharsis - that by all accounts was well worth the investment.

Today the site of the Crandon massacre is nothing but new grass. Scars are fading and efforts underway to build a memorial - maybe a fountain or a statue, or maybe just quiet, empty place for remembering … and forgetting.