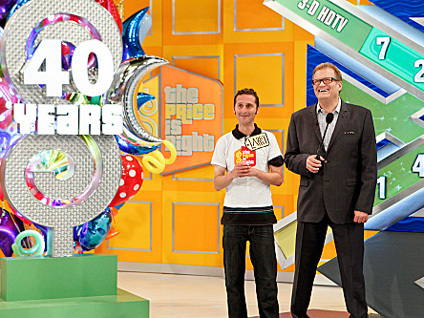 (CBS News) "The Price is Right" marked its 40th anniversary Tuesday with a special episode filled with classic clips, a montage of "Come on down!" moments and returning contestants.

The CBS series - the longest-running game show in television history - debuted on Sept. 4, 1972, with Bob Barker as host. Drew Carry has hosted the program since 2007.

Tuesday's episode included an appearance by the contestant who won the first-ever showcase, and another who won an airplane on the show in 1976.

One person who did not "come on down" for the milestone episode was Barker, though he was seen in clips from past episodes.

"The Price is Right" is also gearing up for another milestone - its first male model. A casting call took place last week, and the finalists will be revealed on the show's Sept. 28 episode. Viewers can then vote online through Oct. 4, and the winner will begin his week-long stint on the show on Oct. 15.

Watch a clip from the 40th-anniversary episode below: