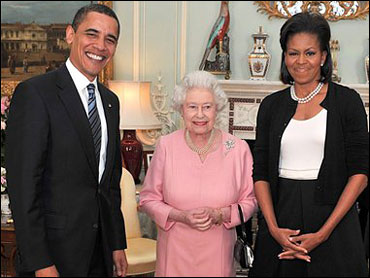 "It was a wonderful visit," Obama told reporters as he left the palace, according to the Associated Press. "Her majesty is delightful."

(AP Photo/John Stillwell)
Earlier in the day, the president praised the queen as a model of "decency and civility."

During the private meeting over tea, which lasted about 25 minutes, the president gave the queen an iPod as a gift; it contained footage of her visit to Washington and Virginia in 2007, According to Time. She was also presented with a songbook signed by composer Richard Rodgers.

The queen, meanwhile, gave the president "a silver framed photo of herself and her husband, as she does all visiting dignitaries."

Here's some (sound-free) video of the meeting:

The AP reports that the queen's handlers had to ask Mr. Obama's driver to move the president's bulletproof limousine, which was blocking an entrance to the palace. After it was moved, dignitaries including Prince Charles entered the grounds for the reception the 82-year-old queen hosted immediately after the meeting in honor of Mr. Obama and other leaders attending the G20 summit.

Elizabeth II has now met with all 12 U.S. presidents that have served during her time as Queen with the exception of Lyndon Johnson. (Read more on the Queen's presidential meetings.)

As President Obama entered Buckingham Palace, hundreds of onlookers gathered outside cheered and waved at the presidential limousine.