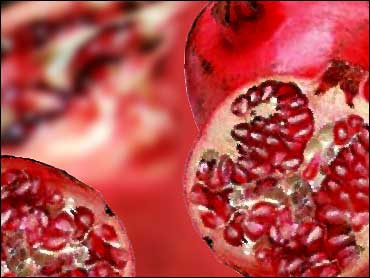 Could osteoarthritis be brought to its knees by a simple fruit?

Researchers aren't making that declaration just yet. But they have found signs that natural compounds called antioxidants in pomegranates may thwart osteoarthritis.

Osteoarthritis is the most common type of arthritis, with more than 20 million patients in the U.S., according to the National Institute of Arthritis and Musculoskeletal and Skin Diseases (NIAMS).

The pomegranate study was done at Case Western Reserve University. The researchers included Tariq Haqqi, PhD, a professor of medicine. The results appear in The Journal of Nutrition.

Pomegranate extract was pitted against osteoarthritis in lab tests. That's not the same as tests on people or animals, but it's a first step.

Pomegranate extract did two things in those lab tests. It cut levels of an inflammatory chemical called interleukin-1b (IL-1b). It also curbed enzymes that erode cartilage.

Cartilage is a hard but slippery coating on the end of each bone that helps bones slide smoothly past each other. Osteoarthritis develops when cartilage is broken down; exposed bone breaks down, causing pain, inflammation, and disability.

This is the first study to show pomegranate's potential against osteoarthritis, note the researchers.

The results "indicate the pomegranate fruit extract or compounds derived from it may inhibit cartilage degradation in osteoarthritis and may also be a useful nutritive supplement for maintaining joint integrity and function," they write.

"Arthritis is one of the foremost diseases for which patients seek herbal or traditional medicine treatments," says Haqqi in a news release.

"However, all the extracts and herbs have not been scientifically evaluated for their efficacy and safety. Indeed, some of them may even interfere with current treatments," he continues.

"Therefore, careful use of supplements and herbal medicines during early stages of disease or treatment may be made to limit the disease progression," says Haqqi.

As always, discuss any supplement use with your doctor.

The researchers didn't just crack open a pomegranate and put it in a blender. They also didn't use juice from the supermarket.

Instead, they made their own pomegranate extract from powdered pomegranate. Sophisticated filtering and measuring was used for science's sake.

The pomegranate has "been revered through the ages for its medicinal uses," write the researchers.

Antioxidants in pomegranates fight inflammation and may also counter cancer and heart disease.

Pomegranates are in season in the U.S. in the fall. They've got a thick, red, leathery skin. The seeds inside are the edible part.

Want to try a pomegranate? You might want to wear a bib or old clothes. The seeds leave a very strong stain and are used as a dye.