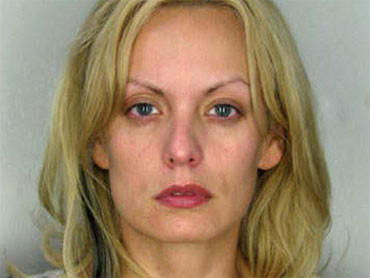 Daniels, whose real name is Stephanie Clifford, was arrested July 25 and booked on a misdemeanor domestic violence charge. According to the police report, Michael Mosny, Daniels husband, told police that Daniels was upset "about the way the clothes had been done" and then "got more upset about some bills that had not been paid."

The police report said Daniels allegedly "threw a potted plant at the kitchen sink," hit Mosny on the head several times and "threw their wedding album onto the floor and knocked candles off the coffee table, breaking them."

Daniels, a Louisiana native currently living in Florida, has formed an exploratory committee for a possible 2010 run against incumbent first-term Louisiana Republican David Vitter, who is still recovering from a sex scandal.

Her arrest came two days after her political adviser in Louisiana, Brian Welsh, said his parked 1996 Audi may have been blown up by someone on July 23 outside his apartment in an upscale downtown area of New Orleans.

"It's something out of The Sopranos," said Edward E. Chervenak, a professor of politics at the University of New Orleans. "Very weird."

Welsh, a Democratic adviser and manager of the Stormy Daniels Senate Exploratory Committee LLC., said his Audi convertible exploded into flames around 11:15 p.m. July 23, while he and his wife were walking their dog nearby.

Welsh said he was uncertain if the explosion was connected to his work with Daniels.

In May, Daniels announced that she was interested in a 2010 run for the Senate seat held by Vitter, whose family-values reputation was marred in 2007 when his name was linked to a Washington prostitution ring.

Daniels has not officially declared herself a candidate, but has continued to express an interest. She has acknowledged that she hasn't lived in Louisiana for years and would need to re-establish residency to run for Senate. The 30-year-old Louisiana native kicked off a second "listening tour" in early July.