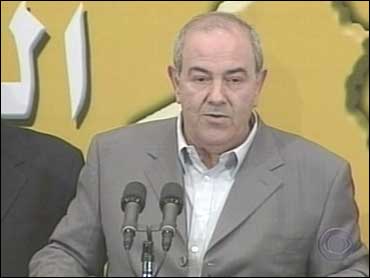 "This has been a process of full blown democratic politics," said a senior administration official speaking to reporters by telephone from Baghdad about the selection of Iyad Allawi as Prime Minister of the new, interim government which takes over in Iraq on July 1. Perhaps an overly exuberant characterization but one made, nevertheless.

Allawi has emerged as the man who was able to get the most widespread popular support after a selection process which touched many bases both inside and outside Iraq. The senior administration official said "almost everyone has been politicking, persuading others to promote them…even saying some uncomplimentary things" about certain rivals. "We plumbed virtually every place in Iraqi society."

Iyad Allawi is a physician and a politician who was for several decades involved in anti-Saddam Hussein politics from a base in London. He's also a former member of the Baath party and, according to several analysts in Washington, Allawi has longstanding connections to the CIA. Although a member of the U.S.-appointed Governing Council in Iraq, it's still a bit of a surprise that he's emerged as Prime Minister-designate.

Picking a slate of candidates to head the interim government was never going to be an easy task. Officially it fell to the U N's special envoy, Ambassador Lakhdar Brahimi, and he's been spending a lot of time in Iraq, mostly in Baghdad but also in other parts of the country, talking to various factions -- Sunnis, Shias, Kurds, tribal and religious leaders and other power brokers too.

In the last category it would be safe to include the outgoing head of the Coalition Provisional Authority, Ambassador Paul Bremer. In recent months Ambassador Robert Blackwill, representing National Security Council advisor Condoleezza Rice, has been very active as well, spending most of his time in Iraq. Bremer and Black will have met frequently with Brahimi to compare notes.

When the process started, Brahimi indicated he was looking for technocrats to lead the interim government until elections could be held. The idea was that politicians should stay out of the mix until elections were arranged. Let Iraqi experts takeover from the American occupation and be the transitional bridge to an elected Iraqi leadership.

"This idea ran into problems from the beginning," says one Iraq expert in Washington, speaking on condition of anonymity, "because the politicians wanted to be in power."

"There's been politicking going on … obviously a groundswell occurred (on behalf of Allawi )," said the senior official. Asked by a reporter if there was a concern in the international community about Allawi's ties to the CIA or that he has lived outside Iraq for many years, the senior official said "it's important what the international community thinks, but it's more important what Iraqis think. He's gone through the process … and has support."

Allawi may be seen as a moderate by some, but one Iraqi academic in Washington, who's writing a book on Iraqi politics and society, says Allawi may be inclined toward what he calls "military politics." His party base is small and consists of former members of the Baath party. His selection indicates, says this scholar, that more former Baathists, including members who served Saddam's regime, would have more of a role in the future of Iraq than the CPA has so far been willing to approve.

Although Allawi is a Shi'a Muslim, the American analyst says the designated leader is mainly secular and also a nationalist. He will want a strong central government, the analyst says, and, in one area which the Bush administration will find agreement with the new leader, Allawi is said not to be pro-Iranian.

In the coming days, the U N's Brahimi will name the entire leadership of the interim government. It's expected they will then send a delegation to the U N to take part in discussions on a new security council resolution which would recognize the sovereign powers of the new government.

Now the question is whether this latest prediction for Iraq's future by a senior administration official will turn out to be a political plus or another point of debate for the upcoming campaign season.