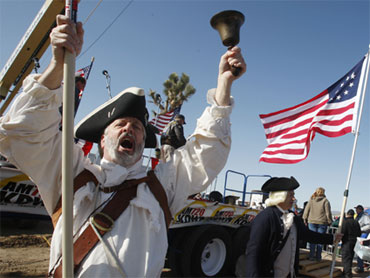 Victor Davis Hanson is a senior fellow at the Hoover Institution and a recipient of the 2007 National Humanities Medal.


Why are charges of racism and political extremism suddenly in the air?

Party politics is always the norm, but what is unusual this time around is the juxtaposition between the once-soaring Obama unity rhetoric of the past and the hardball Chicago politics of the present, amid a landscape of feigned outrage that somehow politics are not "fair." A bit of history is in order.

Like it or not, throughout much of the Bush administration, the public was conditioned to believe the following:

Filibusters were a key traditional Senate protection designed to thwart the tyranny of the majority as embodied by the Bush-Cheney steamroller (Republicans, to be fair, often damned them as obstructionist).

Recess appointments were the desperate acts of an executive without confidence in either popular or legislative support. Popular protests were grass-roots democracy at its finest.

Occasional fringe groups that frequented anti-war, anti-Bush rallies, and called their president horrific epithets or threatened violence, were either irrelevant or forced into such understandable extremism by their own government's excesses.

The once-abhorrent expression of hatred in popular culture for the president (cf. e.g., Knopf's Nicholson Baker novel Checkpoint, about killing Bush, or the Toronto Film Festival award winning a docudrama about assassinating George Bush, or Jonathan Chait's New Republic essay "The Case for Bush Hatred," or Michael Moore's abhorrent talk after 9/11 about blue/red state deaths and his empathy for terrorists in Iraq ("Minutemen" . . . "and they will win")) were not merely not abhorrent, but often creative expressions that captured the mood of popular dislike, and certainly no grounds for ostracism (cf. Moore's attendance at film openings and conventions with top Democratic politicians).

In other words, apparently few on the Left realized that in their dislike for Bush, and in their tolerance for those who hated Bush, they more or less changed attitudes toward acceptable and unacceptable public expressions of dissent. So now the public sees their sudden call for polite discourse as abject hypocrisy. Even the toxic and increasingly desperate charge of racism has little currency now, and soon will boomerang back on the accusers.

What does all this mean? A largely center-right country that polls consistently conservative apparently is beginning to think it was had in the election of 2008. A weak McCain campaign, weariness after eight years of Bush, fascination with a charismatic African-American landmark candidate, fright after the September 2008 meltdown, and Obama's centrist "purple" rhetoric all provided the margin of victory, but apparently not the margin for an intended remake of America in which the daily conditions under which we live and see the world (buying a Chevy, going to the mailbox on Saturday, attending the doctor, viewing Israel, making claims on Medicare, paying taxes, trying terrorists, etc.) would be radically altered in just a year.

For the once-giddy Left, which misinterpreted the causes of the Obama landmark victory, the current pushback is seen as somehow terribly unfair, and thus arise both their own furor and their amnesia about their own past attitudes during the Bush years. I think ultimately many "progressives," adherents to relativism, feel that the past furor over Bush in all its creepy manifestations was justified because of who Bush was; but that a similar methodology (or, in fact, far softer manifestations) of dissent toward Obama is unacceptable because of who Obama is (i.e. one can act rudely toward clearly bad people, but not rudely toward unquestionably "good" people). It is that simple.