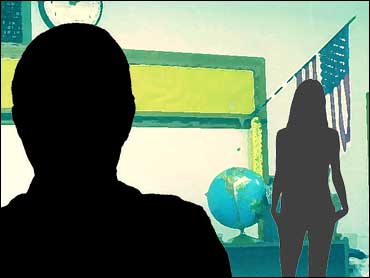 Sensational cases make headlines, but the scale of sexual misconduct by teachers in America's schools gets little attention. The Associated Press has spent months digging through public records to document the problem in every state, revealing a disturbing national picture. This story is the first in a three-day series on an overlooked blight on our education system.

A young teacher in Iowa sheepishly admits that he fondled a fifth-grader's breast. But he doesn't lose his teaching license until one persistent victim and her family go public - 40 years after the first accusation.

A middle school teacher in Pennsylvania targets a young girl in his class and uses the guise of love to abuse her sexually.

A teacher in Michigan, who'd already lost his license in another state, goes to prison after he films himself molesting a boy.

These are only a few instances of a widespread problem in American schools: Sexual misconduct by the very teachers who are supposed to be nurturing the nation's children.

Students in America's schools are groped. They're raped. They're pursued, seduced, and think they're in love.

An Associated Press investigation found more than 2,500 cases over five years in which educators were punished for actions from bizarre to sadistic.

There are 3 million public school teachers nationwide, most devoted to their work. Yet the number of abusive educators, nearly three for every school day, speaks to a much larger problem in a system that is stacked against victims.

Most of the abuse never gets reported. Those cases reported often end with no action. Cases investigated sometimes can't be proven, and many abusers have several victims.

And no one - not the schools, not the courts, not the state or federal governments - has found a surefire way to keep molesting teachers out of classrooms.

Those are the AP's findings after reporters sought disciplinary records in all 50 states and the District of Columbia. The result is an unprecedented national look at the scope of sex offenses by educators - the very definition of breach of trust.

The seven-month investigation found 2,570 educators whose teaching credentials were revoked, denied, voluntarily surrendered or limited from 2001 through 2005 following allegations of sexual misconduct.

Young people were the victims in at least 1,801 of the cases, and more than 80 percent of those were students. More than half the educators who were punished by their states also were convicted of crimes related to the misconduct.

The findings draw obvious comparisons to sex abuse scandals in other institutions, among them the Roman Catholic Church. A review by America's Catholic bishops found that about 4,400 of 110,000 priests were accused of molesting minors from 1950 through 2002.

Clergy abuse is part of the national consciousness after a string of highly publicized cases. But until now, there's been little sense of the extent of educator abuse.

Beyond the horror of individual crimes, the larger shame is the institutions that govern education have only sporadically addressed a problem that's been apparent for years.

"From my own experience - this could get me in trouble - I think every single school district in the nation has at least one perpetrator. At least one," says Mary Jo McGrath, a California lawyer who has spent 30 years investigating misconduct in schools. "It doesn't matter if it's urban or rural or suburban."

One victim wonders why there isn't more outrage.

"You're supposed to be able to send your kids to school knowing that they're going to be safe," says Jennah Bramow, a 20-year-old single mom and waitress in Cedar Rapids, Iowa.

While other victims accepted settlement deals and signed confidentiality agreements, she sued her city's schools for failing to protect her from accused teacher Gary C. Lindsey - and won.

The trial revealed that Lindsey had been forced out of his first teaching job in Oelwein, Iowa, in 1964, after admitting he'd fondled a fifth-grader's breast.

"I guess it was just lust of the flesh," Lindsey told his superintendent. He moved on to schools in Illinois and eventually settled in Cedar Rapids.

Now 68, Lindsey refused multiple requests for an interview. "It never occurs to you people that some people don't want their past opened back up," he said when an AP reporter asked him questions at his home outside Cedar Rapids.

That past, according to court evidence, included abuse accusations from a half-dozen more girls and their parents, along with reprimands from principals that were filed away, explained away and ultimately ignored until 1995, when allegations from Bramow and two other girls forced his early retirement.

Even then, he kept his teaching license until the Bramows filed a complaint with the state. He was never charged criminally.

Like Lindsey's, the cases that the AP found were those of everyday educators - teachers, school psychologists, principals and superintendents among them. They're often popular and recognized for excellence and, in nearly nine out of 10 cases, they're male. While some were accused of abusing students in school, others were cited for sexual misconduct after hours that didn't necessarily involve a kid from their classes.

The overwhelming majority of cases involved public school teachers, since many private schools don't require a teaching license. Even when they do, their disciplinary actions are not a matter of public record.

Two major teachers unions, the American Federation of Teachers and the National Education Association, each denounced sex abuse while emphasizing the need to consider educators' rights.

Kathy Buzad of the AFT said that "if there's one incident of sexual misconduct between a teacher and a student that's one too many."

The AP discovered efforts to stop individual offenders but, overall, a deeply entrenched resistance toward recognizing and fighting abuse. It starts in school hallways, where fellow teachers look away or feel powerless to help. School administrators make behind-the-scenes deals to avoid lawsuits and other trouble. And in state capitals and Congress, lawmakers shy from tough state punishments or any cohesive national policy for fear of disparaging a vital profession.

That only enables rogue teachers, and puts kids who aren't likely to be believed in a tough spot.

Abuse also is treated with misplaced fascination in American culture.

"It's dealt with in a salacious manner with late-night comedians saying, 'What 14-year-old boy wouldn't want to have sex with his teacher?' It trivializes the whole issue," says Robert Shoop, a professor of educational administration at Kansas State University who wrote a book to help school districts deal with sexual misconduct.

"In other cases, it's reported as if this is some deviant who crawled into the school district - 'and now that they're gone, everything's OK.' But it's much more prevalent than people would think."

He and others who track the problem reiterated one point repeatedly during the AP investigation: Very few abusers get caught.

They point to academic studies estimating that only about one in 10 victimized children report sexual abuse of any kind to someone who can do something about it. When it is reported, teachers, administrators and some parents frequently don't - or won't - recognize the signs that a crime is taking place.

"They can't see what's in front of their face. Not unlike a kid in an alcoholic family, who'll say, 'My family is great,'" says McGrath, the California lawyer and investigator who now trains school systems how to recognize what she calls the "red flags" of misconduct.

Heather Kline was skipping classes to spend time with Troy Mansfield, a popular football coach who'd first targeted her when she was in his third-grade class. He gave her gifts and rides in his car. She sat on his lap. The bond ran so deep that the student got chastised repeatedly - even suspended once for being late and absent so often. But there were no questions for the teacher, until the girl's mother got suspicious.

"I didn't have my childhood," says Kline, who's now 18 and hoping to get her GED so she can go to nursing school. "He had me so matured at so young. I remember going from little baby dolls to just being an adult."

Heather read Mansfield's e-mails and instant messages aloud at his 2004 criminal trial, from declarations of true love to explicit references to past sex. He's serving up to 31 years in state prison.

Elsewhere, there have been fitful steps toward catching errant teachers.

More states now require background checks on teachers, fingerprinting and mandatory reporting of abuse, though there is still a lack of coordination among districts and states.

U.S. Supreme Court rulings in the last 20 years on civil rights and sex discrimination have opened schools up to potentially huge financial punishments for abuses, driving some schools to act.

And the National Association of State Directors of Teacher Education and Certification keeps a list of educators who've been punished for any reason, but only shares the names among state agencies.

Another problem: Because teachers are often allowed to resign without losing their credentials, many never show up on the list.

"They might deal with it internally, suspending the person or having the person move on. So their license is never investigated," says Charol Shakeshaft, a leading expert in educator sex abuse who heads the educational leadership department at Virginia Commonwealth University.

It's a dynamic so common it has its own nicknames - "passing the trash" or the "mobile molester."

Aaron M. Brevik is one educator who fell through the cracks.

An elementary teacher in Warren, Mich., he was accused of using a camera hidden in a gym bag to secretly film boys in locker rooms and showers. He also faced charges that he recorded himself molesting a boy while the child slept.

What Michigan officials apparently didn't know when they hired him was that Brevik's teaching license in Minnesota had been permanently suspended in 2001 after he allegedly invited two male minors to stay with him in a hotel room when he was a principal in southeastern Minnesota.

"I tell you what, they never go away," says Steve Janosko, a prosecutor in Ocean County, N.J., who's handled educator abuse cases. "They just blend a little better."