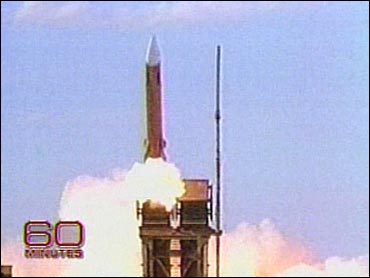 In the Pentagon's multi-billion dollar arsenal of weapons, one weapon that the government has already spent more than $6 billion on has had trouble doing what it was designed to do -- bring down enemy missiles.

That weapon is the Patriot missile system, and as Correspondent Ed Bradley reported last February, it also does something it was not designed to do -- bring down friendly aircraft.

The Patriot was originally built nearly 40 years ago to shoot down aircraft. But just before the 1991 Gulf War, its manufacturer, Raytheon, modified the Patriot to shoot down tactical ballistic missiles.

When the U.S. and its allies invaded Iraq again last year, the U.S. Army deployed Patriot crews across the battlefield. And it wasn't long before those crews knew they had a problem.

On March 23, a British Tornado fighter jet with two men aboard took off from Kuwait. It was the third day of the war, and there was no Iraqi opposition flying.

Their flight should have gone off without a hitch, according to retired Air Vice Marshall Tony Mason, who is advising a British Parliamentary inquiry into what happened next: "They had fulfilled their mission and they were returning without weapons back to base."

Mason says the aircraft was in friendly airspace when it was destroyed by a Patriot missile.

The explosion lit up the sky over Kuwait and killed the two airmen aboard the Tornado. The next morning, soldiers recovered their bodies, and what was left of their plane. U.S. Army commanders explained the Patriot had mistaken the Tornado for an enemy missile, and said the cause might be a computer "glitch."

"If the system is confusing missiles with planes, that is just not just a minor glitch," says Mason. "The two are so different, that it's difficult really to imagine a system could do that."

But the Patriot isn't like most weapons systems: it's almost completely automatic. Its radar tracks airborne objects. Its computer identifies those objects, and then displays them as symbols on a screen. And if the Patriot displays the symbol for an incoming ballistic missile, its operator has just seconds to decide whether to override the machine, or let it fire.

But Patriot computers were doing some strange things in this war, as reporter Robert Riggs from the Dallas station KTVT was surprised to learn when he was embedded with Patriot batteries.

"This was like a bad science fiction movie in which the computer starts creating false targets. And you have the operators of the system wondering is this a figment of a computer's imagination or is this real," says Riggs.

"They were seeing what were called spurious targets that were identified as incoming tactical ballistic missiles. Sometimes, they didn't exist at all in time and space. Other times, they were identifying friendly U.S. aircraft as incoming TBMs."

And it wasn't only Riggs' battery that had this problem. A U.S. Army report says "various Patriot locations throughout the theater" were identifying "spurious TBMs" -- tactical ballistic missiles that didn't exist.

Usually, the Patriot computers corrected these mistakes on their own. But sometimes they didn't.

"We were in one of the command posts. And I walked in and all the operators and officers are focused intently on their screens. And so you know something's going on here," says Riggs. "And suddenly the door flies open, and a Raytheon tech representative runs in and says, 'Don't shoot! Don't shoot!' Well, that got our attention real quick."

On March 25, a U.S. Air Force pilot flying an F-16 fighter jet got a signal that he was being targeted by radar he believed was coming from an enemy missile system. He fired one of his own missiles in self-defense and hit the system that was tracking him -- not an enemy, but the Patriot battery where Riggs was reporting.

"Suddenly, my whole field of vision is just-becomes white light. We all thought we were under Iraqi mortar attack," says Riggs. "We had no idea this is the good guys shooting at us."

"There was no way that Patriot system should have still been up and running, targeting aircraft. They should have stood down, knowing that they had a fatal problem on their hands," says former Congressional investigator Joseph Cirincione.

Cirincione says the Army has known the Patriot had serious problems since at least 1991, when Congress appointed him to lead an investigation of the Patriot's performance in the first Gulf War, a performance that had looked spectacular on network news programs.

"I saw the pictures. I thought this is amazing. This system is exceeding expectations," says Cirincione. "And all during the war, that's what I thought. This was what all the newscasters said it was -- a Scud buster, a miracle weapon."

And it wasn't just newscasters who said so. This is what President George Bush had to say when he visited Raytheon headquarters during the First Gulf War: "The Patriot works because of Patriots like you, and I came again to say thank you to each and every one of you!"

"A lot of money started flowing into the Patriot right after the Gulf War, because everybody thought it was a success," says Cirincione.

But it turns out, that wasn't true. Almost none of the Patriots had worked. Some of them had failed to hit the incoming Scuds. Some had shot at missiles that didn't even exist. But most of them still exploded in the sky, leading everyone to believe they'd scored a kill, when in fact they hadn't.

"The best evidence that we found supports between two and four intercepts out of 44," says Cirincione. "About a 10 percent success rate."

Cirincione said the Army responded angrily to his findings: "The Army insisted that they knew they had some problems with the Patriot, but it didn't serve any purpose to make these public. We would just be aiding the enemy. And that they would take care of it in the course of normal product improvement."

But why would the Army do this? Why is this system so important to them that they would ignore evidence presented by a committee sent by the Congress to investigate it?

"The Patriot is a multi-billion dollar system. There's a lotta money involved. There's a lotta careers involved," says Cirincione, who says the Army continued to claim that the Patriot was a success after he presented them with his findings.

And they kept claiming success until 2001, when the Pentagon finally admitted the Patriot hadn't worked in the First Gulf War. By then, the Patriot had an even more disturbing problem. On the test range, it kept targeting friendly planes. And the man who oversaw those tests from 1994 to 2001 was former Assistant Secretary of Defense Phillip Coyle.

The tests, according to Coyle, included pilots flying real planes and soldiers operating the Patriot missile system. And Coyle says that if they had been using real missiles, they would have shot down friendly planes.

Pentagon, Army and Raytheon officials all declined to talk with 60 Minutes on camera, but a 1996 Pentagon report said the Patriot had "very high 'fratricide' levels" in the early '90s. In other words, in tests it often tried to shoot down friendly planes.

Would the people who ran the Patriot system have been aware that there were problems in misidentifying planes?

"They certainly should have been. I believe they were. But the focus was on hitting a target. Other issues, such as friendly fire, didn't get the same -- either spending, or priority, as the first priority of hitting a target," says Coyle.

Cirincione says that's not surprising: "There's a tendency in all our weapons systems to try to play up the good news and get it through its performance evaluations, and then try to fix the problems later on."

Even if it threatens American and coalition lives?

"Well, they never think of it that way. They think that it's a problem with the system that they can fix down the line," says Cirincione.

But they didn't fix it. Yet, when the U.S. declared war on Iraq last spring, U.S. Army commanders said the Patriot was ready for combat.

"What's so disheartening about this is the very things we warned about came to pass in this war," adds Cirincione. "It's clear that the failure to correct some of the problems that we've known about for 10, 12 years led to soldiers dying needlessly. To flyers, dying needlessly."

On April 2, U.S. Navy Pilot Lt. Nathan White took on his 14th mission of the war. It had been 11 days since the Patriot had shot down a British Tornado fighter jet, and nine days since it had threatened an F-16.

Lt. White took off from the deck of the U.S.S. Kitty Hawk into skies being scanned by Patriots. Navy officials told his father, Dennis White, what happened that night.

"They had finished their mission and had climbed out and were flying back to the Kitty Hawk," says White.

Lt. White's mission was finished and he was on the way home when a Patriot system, on the ground below, identified his plane as an enemy missile and fired two missiles.

"He radioed the lead that he saw them. And as he turned he said they're tracking," recalls White. "He turned. They turned. They followed him … They told me it was probably within four seconds when it was all over with."

It was a direct hit. Lt. White's body was recovered 10 days later.

The Patriot had 12 engagements in this war -- three of them with our own planes. Since then, U.S. military commanders have often claimed the Patriot hit "nine for nine" of the enemy missiles it targeted. But they still haven't produced a report explaining the incidents of friendly fire.

"You don't get promoted for reporting bad news," says Cirincione. "What that means is people turn aside -- and I mean just about everybody in the program will turn aside from the bad news in order to keep the program going, keep the appearance of success."

They confirmed that the Patriot identified the plane as an enemy missile, and said that communications systems were not in place that could have helped the crew overcome the Patriot's error.

The U.S. military has still not explained the Patriot's other friendly fire incidents, including the one that killed Lt. Nathan White.