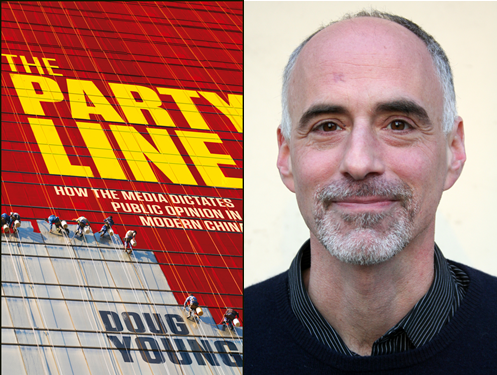 Jeff Glor talks to Doug Young, about The Party Line: How The Media Dictates Public Opinion in Modern China

Doug Young: A few things inspired me to write this book, with the earliest of those dating back to my time living in China in the 1980s. I traveled around quite a bit during that time, and would see newspapers in many of the places I visited, even though I couldn't read them very well back then. I remember the one thing that really struck me about the papers was how they all seemed strangely similar, regardless of whether it was in Shanghai or a small provincial town. There were always pictures of leaders on the front page, often shaking hands and visiting other leaders. There were also lots of stories that seemed quite newsless about meetings and other official gatherings. It had a sort of Orwellian feel to it, and made me curious how such varied papers could all show such a unified front. Later when I became a reporter in China and got to meet Chinese reporters in the course of my work, I began to understand how the Chinese media machine works and found it quite intriguing how messages are crafted at the top and then trickle down throughout the system. That's when I first got the idea for this book.

DY: What surprised me most was the discovery that the Chinese media of today is really quite a diverse group, ranging from the old-style Communist Party newspapers to newspapers and magazines you might expect to find in the west. Likewise, the types of reporters you see are very diverse. I was surprised and encouraged by the number of those reporters who really wanted to be serious, western-style journalists who write investigative stories and news analysis. Only one or two people I met in the course of writing the book were actual state bureaucrat types that you would have expected to see more of in the era before China started opening up.

DY: That's a very good question! I majored in geology when I was in college because I thought I wanted to do that. But then when I realized how isolated and difficult the work was, I opted for reporting. Probably my next choice would be what I'm doing now, which is teaching journalism to young Chinese. It's been quite rewarding to be able to take some of what I've learned over the years and pass on that information to the next generation of journalists. It's also great to work with young people who are just starting out in their careers, unlike myself who is already in his mid to late career phase.

DY: You mean what am I reading beside my own book? The answer is pretty varied. I recently finished "The Emperor of All Maladies," which is about the history of cancer and was a fascinating though somewhat depressing read. I'm also working my way through "Changing Media, Changing China", which is related to my own book. I also like to read the occasional novel, and am currently working on an old classic that I picked up at a used bookstore, "Bless Me Ultima".

DY: I've been lucky to get a research grant from the university where I teach that has no strings attached, so I'm going to use that for my next big project, which will combine several different forms of media. The actual project involves creating an "oral history", which is a series of long, videotaped interviews where all the people interviewed have something in their background that makes a common theme. In my case, I'm doing an oral history of western executives who worked in China for major multinational companies in the 1980s and 90s. I'll give the final series of interviews to my university, Fudan University in Shanghai, for use as a resource for future researchers. In addition, my publisher has also agreed to publish a book that I'll write based on the interviews. Then lastly, I'm also hoping my videographer will be able to do something with the interviews, most likely making a documentary. But don't hold your breath, as any book is probably still at least two years away.

For more on "The Party Line," visit the Wiley website.