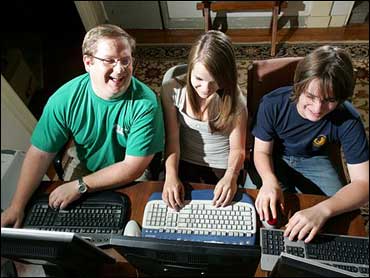 When Will Nickelson and his daughter want to spend some quality time together, they fire up Nintendo Co.'s Wii and play a few rounds of "Wii Sports" or "Mario Party 8."

"It's kind of difficult picking a game for a 7-year-old girl, but she really likes to beat her dad at bowling," says Nickelson, 30, a stay-at-home dad from Huntsville, Ala.

The generation that grew up with "Pac-Man" and "Pong" are now having children of their own. And across the nation, fathers and their kids are finding the virtual worlds of video games a popular place to bond.

Many fathers say the games bring them closer to their kids by providing a safe, convenient way to stay in touch and talk to their children on their own terms.

A national survey released last year by the Entertainment Software Association, a video game industry group, found that 35 percent of parents play video games, of which 80 percent play with their children.

Though he considers himself a lifelong gamer, Nickelson said the time spent with his daughter, Sara, matters much more than the games themselves.

"It's more of a chance to have time with her," he said. "Being a divorced dad, I don't get the time that I would like with her. It's just fun to sit down together and try to have fun together."

"I like the Wii baseball because it's just so fun because I always beat him," she said. "Sometimes I beat him at Wii bowling. He gets kind of mad."

One expert said video games equalize the physical size differences between parents and kids. That means children often have the edge in a video game, and they may feel more willing to communicate.

"You're on the kid's turf," said Dr. Arminta Jacobson,director of the Center for Parent Education at the University of North Texas. "Anything that's fun between fathers and their kids I think is a really good thing."

"Fathers could set aside a time each week to play video games but also set aside times to read, take walks and just talk," she said.

Some dads have made a career out of video games and parenting. "This is a way to bond for the people who don't go out in the sun so much," joked Andrew Bub, a father of two whose Web site, Gamerdad.com, reviews video games from a parent's perspective.

"Taking an interest in what your kids do will always make you a better parent. And, you'll have a better idea about what to buy them for Christmas."

Guy Buckmaster, a marketing director in Clearwater, Fla., started gaming with his six children in the late 1990s with "Diablo II: Lord of Destruction."

He still plays with them about two nights per week on another game, "Guild Wars," where they can chat, hash out personal issues and defeat others in online computer battles.

"It's allowed me to be a continuing influence and provide guidance in their life, and that's important to me," said Buckmaster, 55. "This has been an instrument that is
unparalleled."

At John Idler's home in Moorestown, N.J., a dining room has been converted into a gaming center with three computers linked to the Internet, so he and his sons can play online PC games while sitting side by side.

It's also right next to the TV room, so the whole family can still talk, even if his non-gaming wife and daughter would rather watch television.

He said the fun of video games is certainly part of the lure, but it's really just an excuse to spend time together.

One of his sons, 19-year-old Matthew Idler, plans on keeping video games a family tradition for years to come. "It will be something I do with my kids when I have them," he said, "and my dad will be invited to play with us, of course."