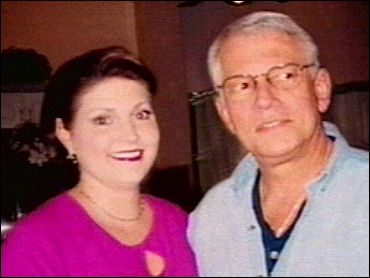 For Kristen Stephens, voices of her father, Dr. David Stephens, bring back a lifetime of memories and voices from the past.

But Kristen could never have imagined how it all would end.

"How can this happen to an everyday apple-pie family," she says. "There are the kind of things you read about in the headlines or see on TV. These types of things don't happen to you. And I just can't fathom how one person can have such a huge impact on an entire family."

She's talking about Stephanie Stephens, her stepmother, whom Kristen says tore her family apart and murdered her father.

"I hate her. I wish her nothing but ill will," says Kristen. "I think she is an evil person."

"I'm a good person. I care a lot about other people, and those people that are closest to me know it," says Stephanie. "It's just, unfortunately, the bad decisions that I've made have been public folly."

But in the sleepy town of Hattiesburg, Miss., what happened to this prominent surgeon was the stuff that scandals are made of. Correspondent Harold Dow reports.

Both Stephanie and David were married when they first met. She'd landed a nursing job at the heart clinic Dr. Stephens had founded. For him, Hattiesburg was home for more than a decade. He had been married to wife Karen for 34 years, and they had two children: Kristen and Allen.

Before long, Stephanie, a married mother of two daughters, says she began to fall for the man behind the surgeon's mask: "We both felt like we were in love and talked about it. And neither one of us were willing to leave our partners."

The couple began an affair and their secret trysts continued for years – until their affair was discovered in 1995, when Stephanie decided to call Dr. Stephens' house.

"My mother had answered the phone," recalls Kristen, who says that her mother suspected her husband was cheating, but didn't know until then, with whom. Now, she was devastated. "She got a gun, then she ran out into the driveway with it in her mouth and called his name, wanting him to turn around and look at her -- to see how desperate she was that she could not tolerate him leaving her. And she tripped and the gun went off."

Karen Stephens was rushed to the hospital with a gunshot wound to the head. For three months, she lived in a coma, until one night, she died. It was ruled a suicide.

"I knew that it was very important that if I wanted to keep my father, I needed to let him know that I forgave him for that," says Kristen. "And I couldn't be angry with him, because I knew from his voice, from the words that he used to talk to me about it, that he felt enormously guilty."

Stephanie says she felt guilty, too: "I did contribute to her death by having an affair with a married man, and the consequences that go along with that … It was several months before I could look at myself in the mirror! It was painful."

But she and David seemed determined to move on. Months later, right in front of the Stephens' home, where Karen had shot herself, the couple were married. "I thought it was too soon," says Kristen. "I accepted the marriage, but it didn't mean I had to like Stephanie."

Stephanie says she was a loving wife, and stuck by her new husband, even when he fell seriously ill in the summer of 2000.

"He was diagnosed with Hepatitis C and was in liver failure … And was on the liver transplant waiting list. And he also had diabetes," says Stephanie. "The thought of having a long-term illness to a surgeon is unthinkable. He talked about not wanting to go through having a liver transplant."

"She didn't care how he died, as long as he was dead," says Kristen, who claims that Stephanie never loved her father - only his money.

On May 1, 2001, Kristen discovered that her father had died in his sleep. "I was extremely shocked that he had died," says Kristen, who left her home in North Carolina and rushed to Hattiesburg, suspecting foul play. "When I entered the bedroom, I knew immediately, she'd done something to him."

She says Stephanie was acting strangely: "On the bed were all of my father's financial documents. Who would be reading that sort of stuff, not even 24 hours after their husband died?"

"There's not a day that goes by when I don't think of him," says Stephanie.

But Kristen believes Stephanie is responsible for her father's death: "I shoved her up against the wall, and I stared her right in the face and I said, 'You killed my mother...and you killed my father...and I hope you rot in hell, you bitch!'"

David Stephens was chief of surgery at Hattiesburg's Forrest General Hospital. He was on the board there, and at the university in town.

Stephanie admits she is guilty of adultery, but not of murder: "Just because people don't like me, doesn't make me a killer."

In fact, Stephanie says her life has been like a Greek tragedy. Soon after she married David Stephens in 1996, she was crippled in a car crash. After Stephens' death, the dream house they built together was robbed.

And now, with Kristen Stephens contesting her father's will, Stephanie says it's hard to make ends meet. She has no car, and no phone. But it's been the loss of her friends that's hurt the most.

"The truth keeps me going. That, and my daughters," says Stephanie, whose daughters live nearby with her first husband. Krystal, 16, is Stephanie's only real link to the outside world. "They're the reason that life goes on. It's hard to stay focused on a reason to live."

Stephanie says that before David died, he was feeling the same way. Even with almost a million dollars in a retirement fund, she says they worried about their future: "It was tough. We had gone from, you know, making a full surgeon's salary to disability."

By the spring of 2001, David was weak and disoriented - and rarely slept through the night. On the night of May 1, Stephanie says he tossed and turned for hours, and fell asleep around dawn.

"I woke up and when I sat up in bed, I saw him. He was purple in the face and I got up and ran around the side and pulled the covers back, and he was blue and not breathing," recalls Stephanie. "It was obvious he was dead and had been dead. He was cool. I just laid there and cried. Put my head on his chest and cried."

Coroner Butch Benedict was on the scene: "When we first got there, it appears to be that he died in his sleep."

David was lying on his back, arms crossed on his chest, his insulin pump strapped to his side. Benedict says he thought he had an open and shut case, until Stephanie opened her mouth and seemed in a hurry to remove the insulin vials from the pump.

This made Benedict suspicious. When he ran blood tests on the body, he said "there were chemicals in his body that shouldn't be there." He contacted Hattiesburg Det. Rusty Keyes, who started digging deeper into the case.

"The fact is that he died, whether accidentally or by his own hand, that's a question I'll never know the answer to," says Stephanie, who claims that he was ill and depressed at the time of his death.

"He was not depressed. Stephanie wanted people to think my father was very sick because it was convenient for everyone to think he was very sick, because they wouldn't question when he died," says Kristen, who plans to help Keyes unmask a murderer.

"Stephanie wanted to live the life of a socialite. She had the fancy house. She had the nice cars, the best clothes," says Keyes. "She wanted it easy. She wanted it through Dr. Stephens' hard work … This man was murdered, and I was going to prove how."

"The time that I spent with David was so good that it's hard to deny that that was the best years of my life," says Stephanie Stephens, who insists she has no idea how her husband died next to her in bed. "You never prepare yourself for when you wake up and your husband's dead."

But Kristen, David's daughter, doesn't buy her story: "She knew when she married my father he was sick. I don't think that he died quick enough for her, is what the problem was."

Kristen says Stephanie was counting on people assuming David Stephens died of natural causes and never thought coroner Butch Benedict would do a blood test on the body.

"There was a chemical in his blood that was usually given by an anesthesiologist," says Benedict, who discovered Etomidate, an anesthetic, in his system. "So where did that drug come from because it should not be in his system?"

"First, we had to find out how he could have gotten this etomidate in his system. That's all we had," says Hattiesburg Det. Rusty Keyes. "She [Stephanie] didn't have any idea how this drug got into his system. and she didn't even know what the drug was."

But Stephanie allowed police to search the house, and Keyes says he discovered some interesting things. "I found that he was a diabetic, and that he was on an insulin pump," says Keyes. "It was obvious that we had to exhume Dr. Stephens, to prove exactly how he died."

More tests produced more questions. There was another drug in Stephens' body, called Atricurium, used to relax muscles during surgery while patients are on life support.

But without life support, Keyes says it will "totally paralyze your heart, your lungs, and you will die." In fact, he says these drugs act so quickly that David couldn't have possibly injected himself and cleaned up afterwards.

"That told me lots that somebody cleaned up, so then I knew then that I had a homicide," says Keyes, who also discovered a piece of paper – one that said that every year on May 1, David Stephens' Metlife pension fund mailed him an option to cash out for almost a million dollars. David had always signed the form, checking the box that declined to cash out.

But in 2001, Keyes noticed that David Stephens' signature was on the form, and the cash out box was signed. The form was dated April 30, the day before he died. On that date, Metlife hadn't even mailed the form out yet.

Part II: The Other Woman

Inside a serial killer's storage container used for torture
Thanks for reading CBS NEWS.
Create your free account or log in
for more features.
View CBS News In
CBS News App Open
Chrome Safari Continue
Be the first to know
Get browser notifications for breaking news, live events, and exclusive reporting.