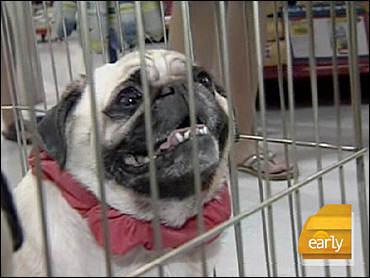 The housing slump and flood of foreclosures is not only taking a toll on homeowners - as Kelly Cobiella explains, pets are also becoming victims of the financial crisis.

There was no sign to announce a foreclosure on an Orlando home. It was the barking sound that drew the neighbors attention. "No dog should be treated and left alone like that. That dog was out there 24/7. You could hear it crying," says neighbor Carol Ann Sparveri.

Across the country, family pets - dogs, cats, and even a pot bellied pig - are being turned over to animal shelters or left to fend for themselves because their owners either can't afford their home, or can't afford them.

"It's so sad. It shouldn't have anything to do with their pets. If they're losing their house, how would they not be able to keep their animal?" asks shelter visitor Lauren Hord.

Linda, a yellow Lab, was with her owner for three years. When the house went into foreclosure two months ago, her owner had to move in with relatives.

Phone calls to the Humane Society of Greater Miami from desperate pet owners have quadrupled this year.

There are no hard figures nationwide, but shelters in foreclosure hot zones, like Florida, Arizona and California, all report significant jumps in the number of family pets handed over due to economic hardship.

Compounding the problem is that the number of adoptions is slowing down.

The Humane Society of the United States has launched a foreclosure fund to help local chapters care for the animals. It has brought in $80,000 so far - a drop in the water bowl considering the flood of foreclosures still to come.