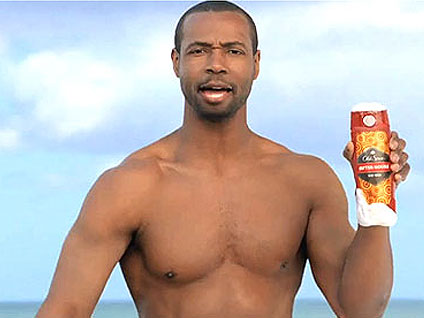 What part does The Old Spice Guy get in the new film?

"I'm playing a cop because I play these authoritative characters well," Mustafa tells The Hollywood Reporter. "I don't know exactly who I'm in the scene with - maybe Jennifer Aniston!"

"It's a smaller role, but who wouldn't want to be in one of these funny, irreverent comedies? The cast is great."

Looks as if Aniston will now be able to get a whiff of Mustafa's irrepressible charms, and underarms.

Meanwhile, Isaiah has also signed a talent deal with NBC, starting with a guest role on the series "Chuck." He says "I don't know how many episodes yet, but I do know I'm playing an official CIA guy (named Greta)," he says. "The character is pretty goofy, so it's going to be fun."

Whether he'll be shirtless is up in the air. Also in question is whether there will be more ads from the Old Spice Guy?

"As far as commercials, I don't think there are any more lined up," he says.

"They could always change their mind and want more. I signed on to be their spokesperson for a year, so I still have a few months left."

The release date for "Horrible Bosses" has not yet been announced.