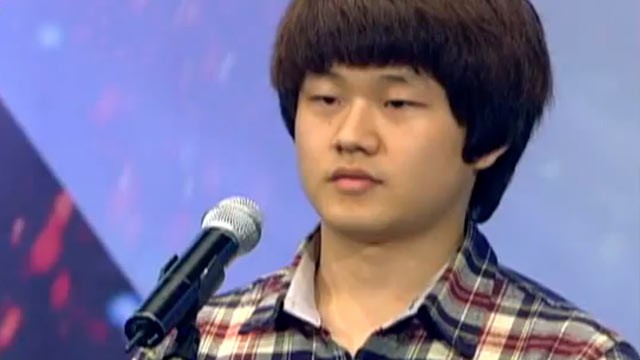 (CBS) - My boyfriend told me this YouTube clip made him tear up.

Sung-bong Choi, a 22-year-old manual worker, knocked the judges' socks off with his amazing voice on "Korea's Got Talent." But before that, his story made them (and us) cry - a lot.

"I just want to be like a normal person," Choi said. He doesn't think he sings very well, but when he does, he feels like a different person. You see, Choi was left in an orphanage when he was 3 years old and ran away when he was 5 after being beaten. He sold gum and energy drinks on the streets of Korea to survive. "I slept on the stairs or public toilet for 10 years like a dayfly."

Now Choi hopes to be able to go to school and continue singing.

After telling his sad yet remarkable story, he belted out some powerful vocals, and wowed everyone.

"I just want to give you a hug," says one of the judges with tears in her eyes.

He obviously made it through to the next round, and is being regarded as the next Susan Boyle.