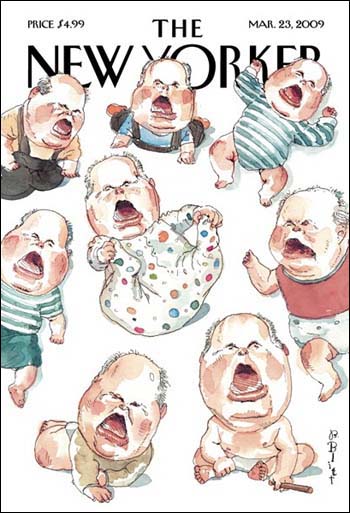 (The New Yorker)
In one of its less subtler moments, this week's New Yorker depicts conservative talk show host Rush Limbaugh as a fussy baby. And not just one screaming, tantrum-throwing infant, but eight of them.

Limbaugh, as readers here surely know, has emerged as the chief voice of opposition during the first weeks of Barack Obama's presidency. White House spokesman Robert Gibbs picked up on a statement made by Limbaugh days before the inauguration when Limbaugh said hoped Mr. Obama failed because he didn't believe in the incoming president's policies.

He was in the headlines for weeks after that, at one point challenging Mr. Obama to a debate.

Meanwhile, the designated head of the GOP, Republican National Committee chair Michael Steele has had a bumpy few months since being named to the job in January. His latest misstep involved an interview with GQ in which Steele suggested abortion should be "an individual choice." This prompted a lot of angry reaction from the conservative base and ended with some "I'm pro-life" backpedaling from Steele.

Limbaugh marked his 20th year in syndication this year and signed a contract last year reportedly paying him $38 million a year through 2016.

Now that's something to scream about.