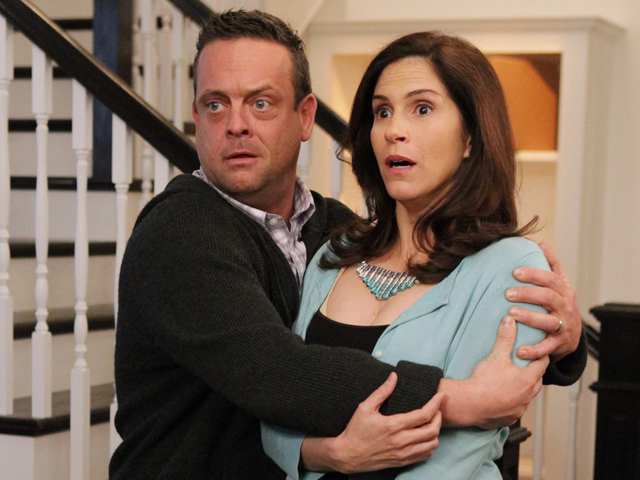 (CBS News) Put aliens and a "normal" family together and what do you get? "The Neighbors," ABC's new sitcom, which debuted Wednesday night.

Except the sci-fi comedy series isn't very funny, or for that matter, very entertaining -- unless bizarre, silly aliens are your thing. And even then, it will be interesting to see how the show can hold up over an entire season.

Starring Jami Gertz and Lenny Venito as Debbie and Marty Weaver, "The Neighbors" centers around a family who moves into Hidden Hills, a small gated suburban community in New Jersey only to discover they're surrounded by alien residents who look just like humans. The couple moves into the "first available unit in 10 years," and quickly discovers why. Their neighbors are anything but human-like.

"They are peace-loving aliens," Marty tells his wife, who wants to bolt immediately, "I say we stay," Marty insists.

And stay, they do.

They soon find themselves over an alien neighbor's house for dinner. There, the Weavers learn some of the aliens' interesting habits: they cry out of their ears, and men can get pregnant. Despite the absurdity of it all, the Weavers and their three children become friendly with the alien leaders, played by Simon Templeman and Toks Olagundoye.

To make it more bizarre, the aliens have named themselves after professional athletes, such as Reggie Jackson and Larry Bird. "The premise is that we worship our athletes, so the aliens have taken on their names in an attempt to blend in," executive producer Dan Fogelman ("Cars," "Tangled") told The New York Post. The aliens' athlete names remain a running-theme in the pilot, arguably one of the more humorous moments of the episode.

Next week, the Weavers take their new alien neighbors to a mall outside of Hidden Hills. We can guess they will be somewhat shell-shocked when they get there. "The Neighbors" airs Wednesdays at 8:30 p.m. ET.

Tell us: What did you think of "The Neighbors"?