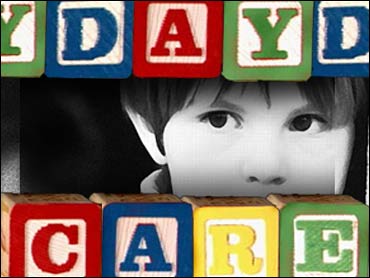 For a long time, parents have grappled with the issue of whether or not to put their kids in the care of others.

The issue is a confusing one, as child development experts have disagreed on whether childcare can negatively effect a child's well being.

Now, two new studies in the journal Child Development have rekindled the debate over the effects of non-maternal childcare on children's behavior.

Both studies found evidence that suggests the longer a child spends in child care, the more stress they may experience, and that could lead to the young to become aggressive and disobedient.

Robin Goodman, Clinical Associate Professor at NYU School of Medicine and Director of www.AboutOurKids.org, visited The Early Show to give some insight into the matter.

Two years ago, he says, some preliminary research was published by the National Institute of Child Health and Human Development, which found children who spent most of their time in childcare were three times as likely to exhibit behavioral problems in kindergarten as those who were cared for primarily by their mothers.

The first study, conducted again by the National Institute of Child Health and Human Development, found that those who spend long hours in child care may experience more stress and are at increased risk of becoming overly aggressive (17 percent) and developing other behavior problems.

To put the numbers from the study into perspective, Goodman says the research found the majority of children in daycare don't experience more stress. He also says the behavioral problems were in normal limits, and not noted as real psychological trauma.

In the study, there was a direct relationship between the amount of time a child spent in childcare and that child's negative behavior. But, the quality of child care didn't seem to matter. A child's socioeconomic background and the sensitivity of the mother could offset those negative effects.

The second study was smaller and was conducted by the Institute of Child Development of the University of Minnesota. It dealt only with children in daycare and found that in kids younger than three, levels of cortisol, a hormone associated with stress, rose in the afternoon during full days they spent in day care, but fell when they got home.

In that study, Goodman says, kids whose cortisol levels increased were also children that were described by their caregivers and teachers and parents as more shy. He says that may account for their stress levels being higher. They don't do well in groups or outside of the home. So, he says, shy kids might struggle in a day care environment. But daycare can't be blamed for the stress.

Goodman suggests measuring a child's hormone and stress levels when they're at a social function because that may cause stress and shyness.

Several experts have weighed in the latest studies and many seem to think this raises future research questions needing answers.

Goodman says kids, in general, will develop problems, whether it's behavioral or Attention Deficit Disorder or social anxiety. And a percentage of those children have the problems for many reasons such as brain abnormalities or predispositions. So, he says, it's not fair to tie the problem to childcare.

It's a mistake, Goodman says, to look only at the children's behavior. Daycares aren't the only places that influence behavior positively or negatively. There are other factors to that shapes a child's behavior, he explains.