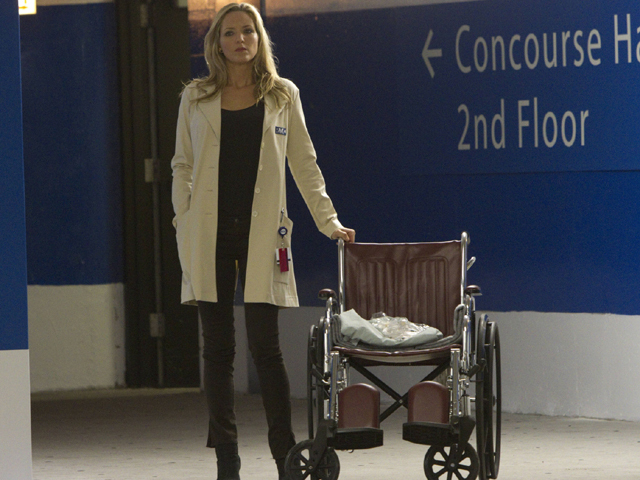 (CBS News) With a name like "The Mob Doctor," you have to wonder about the plot of Fox's new one-hour-long drama. As it turns out, the new series, which premiered Monday night, is just what it sounds like: a mob and medical television mash-up.

She gives private medical care to mob members in order to help pay off her brother Nate's (Jesse Lee Soffer) gambling debt. Enter tough-guy mob boss, Paul Moretti, portrayed by Michael Rappaport. Devlin becomes his on-call doctor so she can keep her brother out of trouble. "He would have killed you," Devlin tells her brother about Moretti.

Sounds a little like "Grey's Anatomy" meets "The Sopranos."

If you were shaking your head last night, don't worry -- even the show's star, actress Jordana Spiro, was skeptical at first.

"When I first heard the concept of the show, I wondered if this was just a gimmicky way to have a medical procedural," Spiro told The Associated Press.

In the premiere, we watch as Devlin navigates the two worlds while simultaneously flirting with her doctor beau, Brett Robinson, (Zach Gilford), and keeping her gangster ex-boyfriend, Franco (James Carpinello), at a distance. The resident doctor also has a complicated relationship with a recently paroled ex-mobster named Constantine (William Forsythe), who tells Devlin, "You've always been like family to me."

Also in the mix is a storyline involving three patients, including a young boy suffering from gunshot wound. But things get complicated when Moretti demands that Devlin kill one of her patients, a former mobster-turned-federal witness. Soon she has a moral dilemma on her hands.

When the operation goes on without a hitch, Moretti isn't pleased. He attempts to find Devlin's brother, and pretty soon, Devlin finds herself in a car chase with Moretti that leads her to the gated home of Constantine. When they arrive within seconds of each other, Constantine takes matter into his own hands; he shoots and kills Moretti. "Nobody liked him anyway," Constantine said before trying to encourage Devlin to skip town. She wants to stay in Chicago, which means her brother's debts will now go to Constantine and she'll continue her involvement with the mob.

"For me, the show is not a medical procedural," she said. "I see it as being about someone who is torn between the two different worlds she occupies. I think she's trying to make good in both these worlds, even when they're at odds - and even if she gets more and more compromised."

But will the new series survive the fall season? It's hard to say, but if you're a fan of medical dramas and gangster-themed storylines, then this could be the show for you.