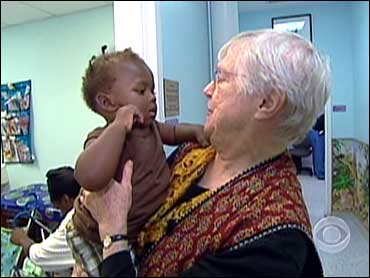 Every time Ruth Lubic fusses over a healthy baby, the joy in her voice comes from eight long years of beating the odds. In Washington, D.C., where the infant mortality rate is almost double the national average, CBS News correspondent Wyatt Andrews reports.

According to the Centers for Disease Control and Prevention, the number of infant deaths per 1,000 births in the United States is 6.8 - but in Washington, it's 12.2.

Lubic and her team of midwives run a birthing clinic in one of the city's poorest areas. After 800 babies in eight years, they have never lost a child in childbirth, and has cut the rate of premature births - the biggest risk factor for infant mortality - in half.

"You are saving a lot of lives here," Andrews said.

Lubic replied: "Saving lives and increasing the quality of life."

Ruth built her clinic in Washington, D.C., on purpose. She figured if her ideas worked there, if she could tackle infant mortality in Washington, she'd set an example everywhere.

Her approach is simple. She believes low-income women, many on Medicaid, need the prenatal education that midwives provide. Everything from posture, to nutrition, to how the baby grows.

Anike Oliver, who just had a baby boy, Ukama, said she got more time with the midwives than she had with a doctor.

"They wanted to make sure I had as much information as they did," Oliver said.

"Do you think it boils down to just the time you spend with them," Andrews asked Lubic.

"I think so," she replied. "I'm convinced that's what it is. It's time, respect, its treating people with dignity."

And what's most remarkable is that Lubic still does it at 81 years old. She's runs the clinic during the week, then runs homeon the weekends to her husband in New York.

"You could be retired!" Andrews said.

Lubic's biggest fan is D.C. city councilman David Catania. He says because she keeps hundreds of babies out of prenatal care, she saves the city around a $1 million a year. That's why he supports her when Ruth hounds the city council for funding.

"While I tease her a lot about being a pit bull with a smile, I look at her sometimes with complete envy about how you can have such a burning drive at 81," Catania said. "And it's a great inspiration."

"I think I'm insufferable because of my … belief that what I'm doing is the right thing to do," Lubic said.

Lubic says infant mortality is a national disgrace - but a disgrace that midwives can help solve.

And this pit bull with a smile won't let go of that idea until it sinks in nationwide.