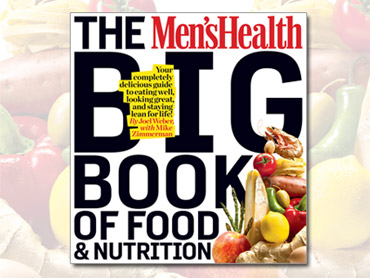 You can make an average of 200-plus food-related decisions each day. Some are no brainers, while others are brainteasers. This excerpt from "The Men's Health Big Book of Food & Nutrition" helps take the guesswork out of eating healthfully.

Food Quiz: How to Avoid Sabotaging Your Diet

1. If my only options are a cheeseburger, a hot dog, or a slice of pizza, which should I eat?
Clearly there's some room for debate about these American staples, as hundreds-if not thousands-of varieties exist. It comes down to your choice of toppings: The more high-fiber vegetables you can include, the better. For that reason, your best option is probably a slice of pizza loaded with a combination of vegetables like vegetables like bell peppers, broccoli, and salad greens. It's not a perfect meal-the carbs in the crust will likely be the refined variety-but the pile of produce on top certainly helps make it a healthier choice.

2. Is a glass of fruit juice the nutritional equivalent of a piece of fruit?
Not even close. Most prepared fruit juices contain not only natural sugar but also huge amounts of added sugar to cut the tartness of the drink (try straight unsweetened cranberry juice sometime to see what we mean). Plus, even juices labeled 100 percent pure aren't necessarily made exclusively from the advertised juice. Superfoods like pomegranate and blueberry may get top billing even though the ingredient list reveals that pear, apple, and grape juices-cheaper to produce and supersweet-are among the first four ingredients. To avoid a sugar surge, pick single-fruit juices, pour half a glass, and fill the rest with water or seltzer. Even better, stick with the whole fruit. A medium orange has just 62 calories, 12 grams of sugar, and three grams of belly-filling fiber compared with the 110 calories, 24 grams of sugar, and zero fiber found in an eight-ounce glass of OJ.

3. Is chicken a better choice than beef?
Not always. A lot depends on how the chicken or cow has been raised. Organic-fed, pasture-raised skinless chicken breast is remarkably healthy, but most of us don't eat chickens that roam free and feed on grass. Today's birds are raised in a way that promotes fat growth. The result? The average piece of chicken has 266 percent more fat than it did in 1971, while its protein content has dropped by a third, according to researchers at the Institute of Brain Chemistry and Human Nutrition, at London Metropolitan University. Similarly, many cows today are fed an unlimited supply of corn to fatten them up as quickly as possible. Grass-fed beef has a different taste and nutritional profile, with 16 percent fewer calories than conventional beef, 27 percent less fat, 10 percent more protein, and a healthier balance of omega-3 to omega-6 fatty acids. So the better choice really depends on the quality of the cut you get, not the kind of meat it is.

This Election Is A Family Matter

4. Is brown rice really much healthier than white rice?
Yes, and that goes for all grains, whether it's the rice with your Chinese takeout, the tortilla used to wrap your burrito, or the bread in your sandwich. If you eat the carbs with the grain-the label will say "whole wheat"-it will be full of fiber because it's made from the entire wheat kernel: germ, bran, and endosperm. Fiber takes up room in your belly, which then sends your brain the signal that you're full. But if the fiber is taken out (as is the case with refined carbs such as white rice and bread), fast-rising blood sugar triggers your pancreas to release a flood of insulin, the hormone that not only lowers blood sugar but also signals your body to store fat. A study from Penn State University compared how much belly fat people lost when they ate whole grains instead of refined grains, and the results were significant: The whole-grain eaters lost 2.4 times more fat! By avoiding refined foods, you also avoid foods that are high on the glycemic index, the scale that gauges the degree to which carbohydrates increase the level of glucose (sugar) in the blood. Dining at regular intervals, eating protein and fat at every meal, and choosing whole grains such as whole-wheat breads and pastas will help manage your blood sugar and thus your cravings-and your fat storage.

5. Are all sources of protein created equal?
Not quite. While many plant foods, including nuts and beans, can provide a good dose of protein, the best sources are dairy products, eggs, lean meat, and fish, says Donald Layman, Ph.D., a professor emeritus of nutrition at the University of Illinois at Urbana- Champaign. Unlike plant-based proteins, animal protein is complete, meaning it contains the right proportions of the essential amino acids your body can't synthesize on its own. It's possible to build complete protein from plant-based foods by combining legumes, nuts, and grains, but you'd need to consume 20 to 25 percent more plant-based protein to reap the same benefits that animal-derived sources would provide, says Mark Tarnopolsky, M.D., Ph.D., who studies nutrition at McMaster University in Ontario.

6. What's better for keeping me awake: a cup of coffee or an energy drink?
Coffee. The caffeine in one cup of black coffee should guarantee you about five hours (give or take) of alertness. Even better, researchers have found that coffee is packed with antioxidants, and studies have shown it enhances short-term memory and helps protect against dementia and cancer. The jolt you feel from an energy drink comes mostly from sugar, which, aside from adding calories, sets you up for an inevitable crash.

7. Is turkey bacon that much better for you than the real thing?
Nope. As far as calories go, the difference between the two is surprisingly negligible. While turkey is a leaner meat, turkey bacon isn't made from 100 percent bird-it comes with a long list of additives and extra ingredients that don't pack any nutritional value. Both kinds of bacon can give you a mouthful of sodium, but at least with regular bacon, you're eating a real food that also makes your kitchen smell delicious.

8. Are white cheeses better than yellow cheeses?
When it comes to weight loss in general, yes. Yellow cheeses tend to have more calories than their lighter-colored counterparts because of their higher fat concentrations. Cheddar, for instance, has 113 calories and nine grams of fat per ounce, whereas Brie comes with 94 calories and eight grams of fat. But either way you slice it, all cheeses are calorie-dense foods. One ounce, which is roughly the size of four dice, has about 100 calories, more than twice as many as you'll find in the same-size serving of salmon. So use portion control.

Excerpted from "The Men's Health Big Book of Food & Nutrition" with permission by Rodale, copyright 2010.