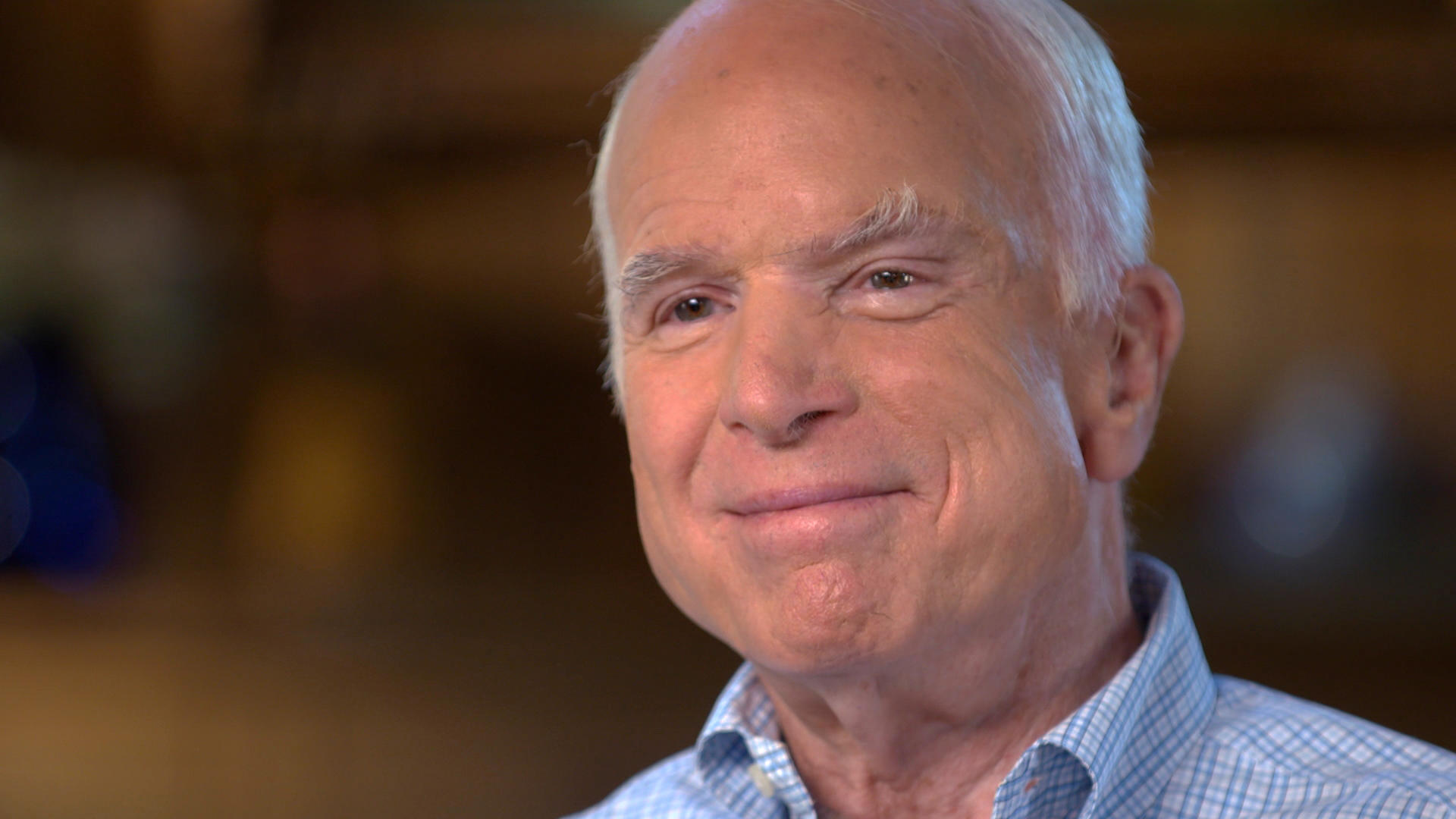 Editor's Note: Senator John McCain died Saturday at the age of 81. We went through Lesley Stahl's interview with Sen. McCain and found some memorable moments that were not included in the September 24, 2017 story. A few such moments are featured below.

U.S. Senator. Former Republican presidential nominee. Esteemed Navy veteran. Husband to Cindy. Father of seven. John McCain, who passed away Saturday at the age of 81, was all of these things, but most of all, he showed us during a candid 60 Minutes interview just 11 months ago, he was a man whose spirit could not be broken, and who followed no one's compass but his own.

In the summer of 2017, Sen. John McCain (R-AZ) invited 60 Minutes' Lesley Stahl to his ranch just beyond the red rock buttes of Sedona, Arizona. Despite the arid, western harshness of the land around, his ranch was green – with generations-old trees giving shade to a creek that gurgled its way over rounded stones in seeming defiance of an unflinching sun. The senator walked with Stahl along the water's edge, stoic and almost serene despite a grueling regimen of radiation and chemotherapy.

Just weeks prior, he had been driving home from a routine checkup in Phoenix when he got a call from his doctor urging him to turn his car around and come right back. As soon as he arrived, they were ready to operate. "They thought it was serious enough that they had to act immediately," he recalled. The lab results came soon after, confirming the worst. The senator had glioblastoma, an aggressive form of brain cancer with a grim prognosis.

A fighter to the end, McCain flew to Washington just 11 days after his surgery, against doctors' advice, to participate in a key procedural vote on the repeal of the Affordable Care Act, advancing repeal efforts by allowing debate to proceed. With surgical stitches still fresh above his left eye, he made his way through the Capitol and down the carpeted dark blue steps of the Senate Chamber – where he entered to a standing ovation and embraces from colleagues on both sides of the aisle.

"It was deeply moving," McCain told 60 Minutes. "I had never seen anything like that."

His ability to maintain friendships across party lines, he said, stemmed from respect – something that, he explained, "over time… turns into affection." There may be no greater example of that respect-turned-affection than that the Arizona senator known as "the Maverick" shared with the late Massachusetts senator hailed "the Lion".

"Some of the biggest and best fights I ever had was with one Ted Kennedy," McCain recounted to Stahl. "And yet– [we were] the closest of friends."

Though polar opposites in many respects, the blue-state Northeasterner and red-state Southwestern man agreed on the need for immigration reform and worked together to that end. They shared something else in common – difficult, ultimately life-ending battles against glioblastoma, which claimed them exactly nine years apart. But neither man gave up without a fight. "I think about Ted a lot," McCain said as he fought the illness. "Ted stayed at his job, kept working. Kept going even when he was in a wheelchair… he never gave up..."

Just months before his death, in a May 2009 farewell letter to President Obama, Sen. Kennedy described health care reform as "the great unfinished business of our society" and "the cause of [his] life." Years later, Sen. McCain, soon after receiving his own diagnosis, would make news – and waves – by refusing to succumb to political pressure on that very issue, even when it came from leaders of his own party. Days after his triumphant return to the Senate, when the Republican priority of repealing the Affordable Care Act was up for a vote on the Senate floor, McCain defied not only President Trump and Vice President Pence, who had personally lobbied him to vote for repeal, but each of his fellow Republican senators – save two – with a single, decisive, downward thrust of his thumb on the Senate floor at 1:29 am. Almost overnight, he went from adored to anathema in conservative circles. Less than 100 hours after casting a procedural vote essential to advancing his party's attempts to repeal the healthcare law, McCain had cast the decisive vote to protect it – refusing to support a repeal of the healthcare law if there wasn't a plan to replace it. It was a decision he did not regret. But not all of his political choices had been that way. An early, vocal advocate for the US-led War in Iraq, which has claimed the lives of nearly 5,000 U.S. servicemembers and countless more Iraqis, McCain by the end of his life described the US decision to enter the war as a "mistake… a very serious one" and assumed responsibility for his part in encouraging U.S. participation.

To Lesley Stahl, McCain's life in Washington seemed the embodiment of what Teddy Roosevelt once described as that of "the man in the arena" – who though he may stumble, keeps fighting on. Sitting with the senator at his Arizona ranch, rustic walls and a weathered horse saddle in the distance behind them, Stahl read McCain an excerpt from the 26th president's famed 1910 "Citizenship In A Republic" address from which that phrase comes.

"It is not the critic who counts, not the man who points out how the strong man stumbles," Stahl read. "The credit belongs to the man who is actually in the arena, whose face is marred by dust and sweat and blood... Who spends himself in a worthy cause… if he fails, at least fails while daring greatly..."

"You are the man in the arena," Stahl told him.

Ultimately, the man who was born for battle – a man whose family lore includes ties to Charlemagne; the patriot who had George Washington in his family tree; the son and grandson of four-star Navy admirals; the fighter pilot who walked away from airplane crashes and escaped an inferno aboard the USS Forrestal; the serviceman who withstood torture and solitary confinement as a POW in Vietnam, and who refused on principle an offer of early release extended to him ahead of his fellow captives on account of his family name; the husband and father who survived a battle against melanoma; and the senator who mounted two presidential campaigns – finally succumbed to a foe that he could not see.

"This is a particularly vicious kind of adversary," he told Stahl of the cancer he was fighting during his last interview with 60 Minutes. "But could I say one more time? I've had the best life anybody could have ever known. And I want to celebrate my life. That's what I want to do."