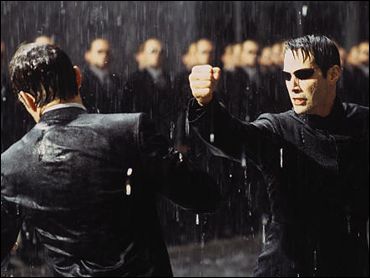 It's been four years since moviegoers made "The Matrix" a smash hit. The sequel, "The Matrix Reloaded," also is expected to clean up at the box office, despite an "R" and early reviews that have been less than rapturous.

Is the movie starring Keanu Reeves, Carrie-Anne Moss and Laurence Fishburne worth a four-year wait?

While many reviewers found much to recommend in the sequel, which opened Thursday, there was also a decided lack of enthusiasm for "Reloaded." The sequel is the middle part of a trilogy from the "Matrix" creators, brothers Larry and Andy Wachowski. The final installment, "The Matrix Revolutions," opens in November.

"Good intentions and great effects notwithstanding, in dramatic terms this is basically an expensive place holder, a rest stop where the narrative can catch its breath before moving on," said the Los Angeles Times.

USA Today had a similar view.

"Displaying even less emotion than body fat, Reeves is vapid as Neo [the film's hero]," the newspaper lamented. "'Reloaded' seems less tired than 'X2,' its current sequel rival. But since its creators have said it's only half of a movie, we won't really know until 'The Matrix Revolutions' arrives Nov. 5 whether this chunk is fizzle or sizzle."

But reviewers also found merit in the sequel. Speaking of the Wachowski brothers, the New York Times said: "Their relentless love of movies, junk-food mythology and thoughtful re-imagining of a future endangered by mass consumption and proliferation of pleasure to the point of soullessness makes for a heady and unusual mix."

For the uninitiated, "The Matrix" tells the story of a man called Neo (Reeves) who is fighting to save humanity from a counterfeit computer universe. A tall order considering that the machines have enslaved mankind. Luckily, Neo - and to a lesser extent Neo's pals - have super powers. As it turns out, they need every one of those powers since the machines don't take any of this lying down. The result is a hell of a lot of fight scenes.

The special-effects intensive thriller is packed with levitation fighting, massive explosions, marble-wall-pulverizing gunfights - and flavored with philosophy about the nature of consciousness and perception.

The movie's distinctive style and look has been ripped off again and again by other filmmakers.

The film has also had a major impact on pop culture. Here's what "Entertainment Tonight" host Bob Goen had to say about "The Matrix" on The Early Show Wednesday: "These 'Matrix' movies are truly trend-setting. The special effects, the fashions they inspire. Right now, any kid will tell you that 'The Matrix' is the true definition of cool."

Warner Bros. thinks cool equals cash. The distributor is opening "Reloaded" in a staggering 3,600 theaters. The previous best opening by an R-rated sequel was "Hannibal" in 2001. Industry observers say "Reloaded" should eat up the cannibalistic psychiatrist.