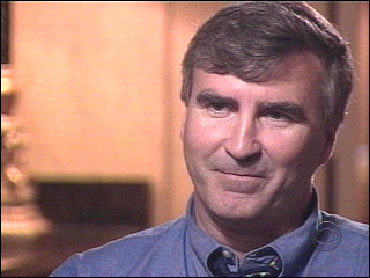 McSweegan once managed a large portfolio of research at the National Institutes of Health (NIH), but his work days have been pretty much empty since March 1996.

It's not that he doesn't want to work. He says they won't let him. Meantime, taxpayers are covering his generous paycheck, reports CBS News Correspondent Sharyl Attkisson.

McSweegan, who earns about $100,000 a year, believes he's being punished for using his personal time to discredit a charity that had influence over his bosses at NIH.

Back in 1995, McSweegan and other scientists felt the charity was putting out unscientific and incorrect information about Lyme Disease, and he used his personal time to discredit the charity.

In 1997, the NIH suspended McSweegan for two weeks, partly because he had referred to the charity as "whacko" on his personal Web site. But documents show that NIH's own lawyers agreed there were no grounds to fire him. The charity later sued McSweegan for slander, but lost. McSweegan won his counter-suit against them.

Before the feud, McSweegan received the highest rating possible in his annual job reviews and was awarded annual cash bonuses for his good job performance. His personnel file is full of commendation letters from his bosses. Even after the feud--including his most recent job review--McSweegan's bosses have continued to give him good job performance scores.

CBS News wanted to talk to McSweegan's bosses, but NIH denied a request. A spokesman did say that allegations that some employees don't have enough work to do are "to be expected" in any giant agency. NIH employs 18,000 people. The spokesman also suggested that the same might be true at CBS. This correspondent pointed out that taxpayers don't pay CBS salaries.

So what does McSweegan do all day?

"I've managed to publish a couple of books, some short story fiction, a little bit of non-fiction writing," he said.

Yes, with all that free time, and with taxpayers footing the bill, he's become a successful mystery writer. And more: "I wound up joining a health club near the office, just to sort of to break up the day," he said

Oddly enough, McSweegan has been getting good job reviews.

"I guess I'm good at doing nothing," he said.

On July 1, NIH issued the following statement: "Dr. McSweegan has always been assigned duties appropriate to his position and pay level. The claim that he is being compensated for doing nothing is completely inaccurate."

And now Grassley wants action. He has fired off a letter to Health and Human Services Secretary Tommy Thompson demanding that McSweegan be put back to work.

After making it clear that the CBS News investigation raised questions about NIH's use of taxpayer money, Grassley said: "Dr. McSweegan wants to work - I expect HHS/NIH to find him appropriate work that makes good use of his experience and talents."

His letter included this rebuke: "The fault for this lies in great part with NIH management. I request that NIH take immediate steps to ensure that all NIH employees are fully employed and are helping to achieve the goals of the organization. To come rattling a tin cup asking for more money when the NIH is paying for full-time novelists has got to stop."

Some might call Edward McSweegan lucky. But McSweegan said he just wants to expose the kind of waste that gives federal bureaucracy a bad name. Even if -- after all these years of doing nothing -- he gets fired for telling about it.

Talking about this in public is sort of like playing Russian roulette, McSweegan said. "You pull the trigger and see what happens."

He might title his own incredible story "Under Worked and Overpaid." For now, he's waiting for someone else to write the last chapter.