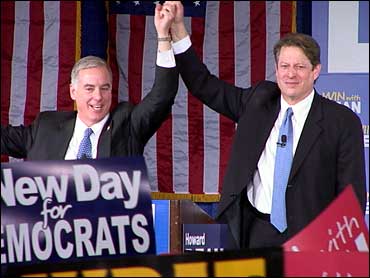 
At about 6 p.m. one evening in early November, Howard Dean entered the home of Al Gore in Nashville, Tenn. For 90 minutes, he met secretly with the former vice president and his wife Tipper, according to a source familiar with the meeting. Gov. Dean chose not to mention the meeting even to his own staff.

The two men had begun speaking regularly in late summer. They spoke primarily about policy and speeches, and according to Dean, not about a possible endorsement.

Their talks continued for months, growing in frequency from calls about once a month to approximately once every ten days.

Last Friday, the former vice president and former governor had scheduled a talk to go over Dean's upcoming foreign policy speech. Dean was campaigning in Iowa when he received a call from Tokyo. It was Gore calling to talk about the speech and to offer a surprise: he wanted to endorse Dean – and he wanted to do it soon.

Campaign manager Joe Trippi said he spoke to the governor after hearing about developing plans for a rally in Iowa. Dean would not explain why. Something big was afoot, but Dean did not want his staffers trying to figure out what it was.

The endorsement was supposed to remain secret until it actually happened, but by Sunday afternoon, Dean had to fill in his staff. Some of them had already suspected that the big news coming had to do with Gore.

On Monday afternoon, calls went out to reporters providing the heads-up to be in Harlem on Tuesday morning. Reporters – being the type of folks who like to ask things like "Why?" – were told just to be there. The campaign desperately tried to keep a lid on the news, but by mid-afternoon the story had leaked. Word spread quickly that Al Gore intended to endorse Howard Dean at dual events on Tuesday.

The Dean campaign had a morning fundraiser in Harlem on the schedule for months, according to campaign spokesman Eric Schmeltzer. With Gore already set to be in New York Monday night through Tuesday morning, fitting him into the Harlem event seemed a natural, especially considering Gore's well-documented appeal to African-American voters.

"When we set this event up I had no idea we were going to have our elected president of the United States here," Dean said in his opening remarks, making reference to the disputed 2000 election. "It is an extraordinary honor for me to stand on this stage with someone I admire greatly," he added from the stage at Harlem's National Black Theater.

After delivering a few passages from his stump speech, Dean introduced Gore, who also spoke briefly because the two men were soon heading out to Iowa, another area that plays to Gore's political strengths. At both events, Gore reminded his audience that when he decided late last year not to run for president he also stated that he would select a candidate to endorse during the primary.

"I'm very proud and honored to endorse Howard Dean to be the next president of the United States," Gore said.

The Democratic nominee of 2000 seemed particularly concerned with uniting his party behind one candidate as early as possible, so as not "to do the Republicans' work for them." While Gore's endorsement doesn't bring organizational support like the support of a major union can, it does bring the stature and credibility of the man many Democrats believe won the 2000 presidential election.

"I want to do everything I can to convince you to get behind Howard Dean," Gore said, while acknowledging that he is just one man with one vote. "All of us need to get behind the strongest candidate."

After the event in Harlem, Dean and Gore flew by chartered jet to Iowa for a second joint appearance. About 30 members of the national media followed along on two separate planes.

In Cedar Rapids, Dean and Gore again heaped praise on one another before going their separate ways – Dean to New Hampshire for a debate with the eight other contenders for the Democratic nomination, and Gore to Sweden.

At this point, the role Gore will play for the Dean campaign is unclear.