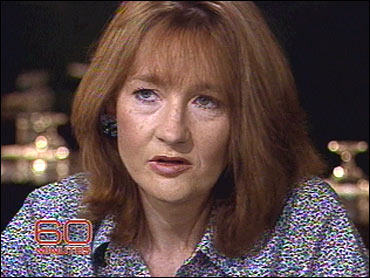 Next week, children and adults around the world will finally be able to buy the book they've been waiting three years for: "Harry Potter And the Order Of The Phoenix".

This fifth installment in the Harry Potter series will no doubt set all sorts of new publishing records. Right now, 8.5 million copies have been printed just for the U.S. market.

60 Minutes first introduced you to J.K. Rowling, Harry Potter's creator, almost four years ago. And at the time, she was just beginning to understand the phenomenon she had produced.

When we first introduced you to Harry Potter a few years ago, more than a few people out there said, 'Harry who?'

Today, there may be someone somewhere who doesn't know him, but we can't find him.

Harry Potter is the wizard hero of the world's most popular novels - four so far, with three more to come. He's also the star of two blockbuster movies.

Nothing has ever happened in the world of children's books or any other kind of books, for that matter, to even approach the Harry Potter phenomenon.

But when we first introduced audiences to Joanne Rowling, Harry's creator, the third book was just about to come out, and the scale of her success was just beginning to sink in.

Joanne Rowling, 36, currently the world's most successful author, lives and writes in the shadow of Edinburgh Castle in Scotland.

"The basic plot is that Harry's not only a wizard, he's a famous wizard, which he doesn't find out until he's 11," says Rowling.

"He finds out why he's got this lightning-shaped scar on his forehead. He finds out that his parents were murdered and what he's supposed to do about it, and also to confront the person who murdered them."

Harry Potter is an old-fashioned good-triumphs-over-evil story, full of quirks and surprises: boys on broomsticks, owls that deliver the mail. It's set in a British boarding school just for young wizards called Hogwarts.

There are a million funny names like that: Headmaster Dumbledore, Evil Lord Voldemort and Harry's know-it-all friend Hermione. It's very apparent that Joanne Rowling was born to play with words.

"I used to collect names of plants that sounded witchy, and then I found this, 'Culpeper's Complete Herbal,' and it was the answer to my
every prayer: flax weed, toadflax, fleawort, Gout-wort, grommel,
knotgrass, Mugwort."

Harry Potter was born in Rowling's imagination nearly 10 years ago. She says she started by drawing pictures of the characters.

The drawings, which she once considered using in the books, are amazingly detailed: Harry, his awful cousin Dudley, Hogwart's magical potions, Professor McGonagall.

Those images were turned into the vivid words that are now captivating so many kids: "Professor McGonagall watched them turn a mouse into a snuffbox. Points were given for how pretty the snuffbox was but taken away if it had whiskers."

"I met this mother in a signing queue not long ago who said to me, 'Oh, and my son is here and he wants to meet you, but he was too ashamed of the state of the book to ask you to sign it,'" remembers Rowling.

"And it was all wrinkly and covered in rubbish and the cover was
falling off. And I made her go and get him because that is exactly the
state I want to see my books in. I have no track with these people, these very anally retentive people, who don't crack the spine when they read a book. I say crack the spine and read it because that's what it's there for."

Harry Potter has now turned Rowling into a publishing figure of historic proportions.

What makes Rowling's success all the more remarkable is what it
followed. In 1994, when her marriage to a Portuguese journalist collapsed, she moved to Edinburgh, Scotland. She had few friends and fewer prospects and ended up on welfare, actually skipping meals to make sure she had enough money for her four-month-old baby.

And while she thought of herself as a writer, she had never published anything.

"Someone, a journalist, actually said to me the other day, 'So you
wrote your whole first novel on napkins, paper napkins,'" says Rowling. "No, I did not write on napkins. I could afford pens and paper, yeah."

But she was on welfare, and in bad straits. "I was in worst straits than I've ever been before," she says.

By then, she had been playing with the idea of Harry Potter, and she says she's always written, ever since she was a little girl growing up in southern England. Even when she worked as a teacher, she was just biding time.

She showed 60 Minutes a photocopy from a textbook when she was teaching in Portugal, scrawled with notes. "This was what I was supposed to be doing with the children, and on the back, you've got all the ghosts for Griffendor."

Griffendor is one of the dormitories at Hogwart's. And her random scribblings were actually all part of a master plan. Long before she was published, Rowling already had seven Harry Potter books meticulously plotted out on grids, one for each year Harry spends at wizards school.

But before you assume she's compulsively organized, you should know that her filing system consists of many, many boxes in her bedroom.

It's one thing to have boxes full of notes, another thing
entirely to turn them into a book. Back in 1994 with a baby daughter and no
money, Rowling knew she had to write it quickly or forget it.

"I decided it was going to be my last-ditch attempt to get
this book published. And so I'd walk around Edinburgh pushing her in
the pushchair and wait till she fell asleep. And then I would literally run to the nearest cafe and write for as long as she stayed asleep."

Most often, she wrote in Nicholson's Restaurant, where they
let her stay for hours, nursing just one cup of coffee. Finally, she
had a manuscript to send off – only to have it rejected.

"Four or five publishers turned it down, I think, and the consistent criticism was, 'It's far too long for children,'" says Rowling, who then began looking in a directory for a literary agent. She came across Christopher Little's name.

"These things can sit in a pile for ages. They're known as the slush pile. They're the unsolicited and, you know, it's the also-rans usually," remembers Little. "And just by chance, two days afterwards, picked up this pile and went off to a lunch because somebody was turning up late. And inside, I started reading about Harry Potter and, you know, my toes curled."

He says he knew it would be a success. However, several more publishers turned Harry Potter down before the British company Bloomsbury finally bought it.

"That moment when he told me that Bloomsbury wanted to take the book, second only to the birth of my daughter, was the happiest moment of my life," says Rowling, who realized that this was not the everyday children's book once book sales were climbing steadily without any publicity.

"No one knew a thing about me. And the only explanation for this
was word of mouth with children," says Rowling.

"The publishers printed, you know, very few books, as they often
do, and the demand came not from anywhere else but out of the playgrounds," adds Little.

Kids in Stamford, Conn., are typical of the fans creating the Harry Potter avalanche.

"It's very different. It's not like a normal, average book," says R.J. "It's, like, so imaginative. It's so detailed, you can, it's almost like watching the book instead of reading it."

"She has a way of making things funny and still mysterious at the
same time," says Lauren.

That's what has kids turning off the TV and computer games. And it's not just kids -- adults are into Harry Potter, too. In Britain, there's even a special grownup edition just for them. Everyone's drawn in by the same thing: adventure and suspense set in a wizard world that's magical and somehow still recognizable.

"She has this parallel universe, just a little off-center, that has a banking system, it has a newspaper, it has a ministry, a ministry of
magic," says Lipson. "It is so complete. And because it's complete, she can keep pulling rabbits out of this hat."

Just the fact that both girls and boys are excited about the same book sets Harry Potter apart. In fact, Rowling's publisher originally tried to mask the fact that she's a woman by using her initials, J.K. on the books.

Now, kids who don't like to read or who have never read before are picking up Rowling's books, reading them and wanting to read more.

"There's nothing better than that," says Rowling. "I've twice met mothers of dyslexic sons and one of them told me that their sons did read the entire books themselves … This absolutely supports my view that children are grossly underestimated."

Rowling would love to be left alone to spin out the rest of her series at a quiet corner table in an Edinburgh cafe. But she's so famous now, that it's getting harder to do. There's also enormous pressure to turn Harry Potter into a marketing machine.

"We're getting over 100 inquires a day, and whether it's Sony Corporation or Microsoft or Boeing, to people that make, you know, cups and saucers," says Little.

"If people could see the kinds of offers I've had to use Harry in advertising and publicity and all sorts of ridiculous, frankly, things," says Rowling. "I've said no to absolutely all of them."

But Rowling is no longer the sole proprietor of Harry Potter. She's sold Warner Bros. the rights to put him on the silver screen and everything that goes with that.

The movie "Harry Potter and the Sorceror's Stone" was a huge, holiday hit and the most successful film of 2001.

As for Rowling, she's still working on book number five, and she
recently got married … no, not to a wizard, but to a Scottish doctor.