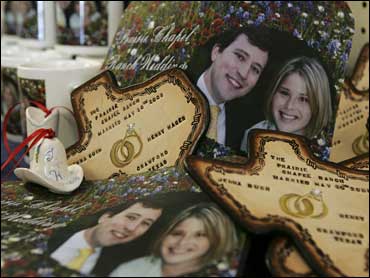 Talk about hush-hush wedding planning. First daughter Jenna Bush was the last in the family to know she was getting married.

Months ago, her fiance, Henry Hager, told Jenna's twin sister that he wanted to propose. Then at the Camp David presidential retreat, Hager asked President Bush and first lady Laura Bush for their daughter's hand in marriage.

For weeks, the president and Mrs. Bush kept their lips zipped.

Then on Aug. 15, 2007, Hager rousted Jenna at 4 a.m. to go hiking on Cadillac Mountain in Acadia National Park in Maine. "It was freezing," Jenna recalled. "But we got up, and we hiked in the dark for an hour and a half, and then when we got towards the top - with the sunrise - he asked me."

Officially, the wedding is a private, family affair. The White House has issued no press releases, but the president and first lady have gradually dribbled out details about the nuptials Saturday at their 1,600-acre ranch in Crawford, Texas.

Here's the lowdown: Jenna, 26, will wear an Oscar de la Renta gown with a small train. More than 200 friends and relatives will attend the outdoor ceremony with dinner and dancing. A tent is being erected at the Western White House. The bride has 14 attendants, who are known not as bridesmaids, but members of the "house party." Barbara Bush, Jenna's twin, is the maid of honor. She helped Hager make decisions about the ring. The diamond, a Hager family heirloom, was reset in a ring that also features sapphires.

On Monday, the president disclosed that Jenna will say "I do" near a lake at the ranch - in front of a giant cross made of Texas limestone that will serve as an altar. The cross will be a landmark at the ranch for years to come. The president said that was his contribution to the wedding that the Bushes are trying to keep a low-key affair.

"That wedding took place during a time of prosperity and peace; this one at a time of economic struggle and war," Wead said. "The Roosevelt family was outgoing, flamboyant; this is a private family. That was one of the most popular presidencies in American history. Even John Adams didn't go on Mount Rushmore, but Teddy Roosevelt went on Mount Rushmore. This is an unpopular presidency. Alice had no bridesmaids. Jenna has 14."

Jenna, the 22nd child of a president to marry while their fathers were in office, has come a ways from her dad's first year in office when she had a run-in with the Texas law for underage drinking. It was her second offense. Then, during her father's re-election campaign in 2004, she was photographed sticking her tongue out at the media at a campaign stop in Missouri. The widely circulated photo reinforced the playful side of her personality.

In 2004, she graduated from the University of Texas at Austin with a degree in English. She taught third grade at Elsie Whitlow Stokes Community Freedom Public Charter School in Washington, D.C.

These days, Jenna has been doing book tours. After a UNICEF internship in Latin America, she wrote "Ana's Story: A Journey of Hope," about a single mother with AIDS. In recent weeks, she's been traveling the country with the first lady promoting their book "Read All About It!" a story about a boy who discovers the joys of reading.

(White House/Kimberlee Hewitt)
The groom, son of the head of the Republican Party in Virginia, met Jenna during her father's 2004 re-election campaign. Hager, who graduated from Wake Forest University, worked as an aide to Bush's former top political adviser Karl Rove and Commerce Secretary Carlos Gutierrez. Hager, who will turn 30 the day before the wedding, is set to receive a master's degree in business administration later this month from the University of Virginia's Darden School of Business.

After the wedding, the couple plans to live in a two-bedroom, two-bath town house on the south side of Baltimore where she plans to return to teaching and he will work for Constellation Energy, a power supplier based in Maryland.

Jenna's mother said Monday that she's not nervous - and the president isn't, either.

"I'm very, very excited," the first lady told reporters. "It's a very interesting passage of life when you get to that time in your life when your child - first child is getting married. And we're getting, for us, our first son."

Laura Bush admits that she half hoped Jenna and Hager, whom she calls "soul mates," would get married at the White House. But Jenna said she was raised in Texas and having a White House wedding just wasn't her style.

"It means a lot to Henry and me to be outdoors," Jenna said in an interview with Vogue magazine. "We wanted something organic and low-key.

"There's a glamour to it, I know," she said of White House ceremonies. "But Henry and I are far less glamorous than the White House."

Her wedding gown, however, was the creation of Oscar de la Renta, a top New York designer and favorite of the first lady's. It's made of organza, a sheer fabric, with embroidery and matte beading. Jenna has described the dress as "simple and elegant."

For the bridesmaids, New York designer Lela Rose, a native of Dallas, has made silk crinkle chiffon, cocktail-length dresses all adorned with handmade chiffon flowers. There are seven different styles of dresses in seven different colors that match the palate of Texas wildflowers - blues, greens, lavenders and pinky reds - that currently are in bloom.

"No two girls will be in the same dress," said Rose, whose father and Bush were general managing partners of the Texas Rangers.

The maid of honor will wear a long, shimmering, moonstone blue silk gown with a fluttered open back. "It's very soft blue," Rose said. "It really matches Barbara's eyes." The dress is accented with a silver sash to complement those used for the bridesmaids' dresses.

Bush may be commander in chief, but outnumbered by three women - his wife and twin daughters - he hasn't gotten to weigh in much on the wedding planning.

"They're letting me spend money," Bush joked in February.

Bush played the role of broke father of the bride again in March, joking: "I had to face some very difficult spending decisions, and I've had to conduct sensitive diplomacy. That's called planning for a wedding."

When he first talked about it, the president didn't seem all that nostalgic about seeing one of his daughters marry. When Hager said "I want to marry your daughter,' Bush said he replied, "Done deal."

Today, Bush is a bit more wistful. With just nine months left in office and his popularity sliding, Bush jokes that GOP presidential candidate John McCain isn't the only one who wants to distance himself from him.

"Jenna is moving out, too," Bush says.