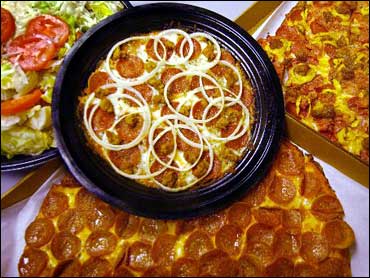 Pizza might be hailed as the food of the gods, one of America's best-loved meals, a hearty delectable dish that fills the stomach and seems to soothe the soul.

But to low-carb dieters, it's just a gut-busting disk of dough.

And that has caused pizza makers around the nation to wonder if the low-carb craze will force changes in one of America's best-loved foods.

"They're saying, "Hey, we've got a problem here. Pizza's built on bread. It's the No. 1 enemy of the Atkinites,'" said Tom Boyles, senior editor of PMQ Magazine, a publication that follows the pizza industry.

Boyles has a word for those who want to avoid carbohydrates: "carbavoids."

"Pizza operators are asking themselves, 'Do I want to do this?' and they're bouncing the idea back and forth," Boyles said. "It's at that point where they're going, 'Just how far is this going to go?"'

According to the National Association of Pizzeria Operators, about 3 billion pizzas are sold each year in the United States by about 40,000 shops.

At the same time, low-carb diets like the Atkins, South Beach and Zone have gained wider popularity. A Harris Interactive poll done last summer for Novartis Consumer Health Inc. estimated that 32 million Americans were on some kind of high-protein, low-carb diet.

Doug Ferriman, owner of Crazy Dough's Pizza Co. in Cambridge's Harvard Square, said he didn't think low-carb dieters would put "too much of a dent" in the pizza business, but he had clipped a recipe for low-carb dough from an industry publication and was going to try it in the spring.

"We're going to have to fiddle around with it for a while," he said.

In Columbus, Ohio, Donatos Pizzeria has announced it will roll out a pizza with a low-carb crust in its 182 outlets. Spokesman Tom Santor said the pizza dough, made out of soy protein and other ingredients, "tastes fabulous."

And in Escondido, Calif., John Pontrelli, owner of Pit Stop Pasta, offers what may be a traditionalist's worst nightmare: "pizza in a bucket." It has all the pizza toppings placed in a crock or, for takeout customers, a metal can.

While it's not a big item, he said, some people have asked for it, and "Our motto here is: you want to say no to people as little as possible."

At Low-Carb Creations in Vancouver, Wash., Craig Adams, vice president and general manager, said sales of low-carb pizza dough had risen 300 percent to 400 percent in the past six months. Adams said the small company, which has 17 employees, had signed agreements to provide the skins to several smaller chains and dozens of other stores.

Tom Lehmann, of the American Institute of Baking in Manhattan, Kansas, a consultant who works with bakeries and pizza operations worldwide, said, "Low-carb is probably the biggest pebble to be dropped in this little pizza pond for a long time. There's just a huge, huge amount of interest."

Lehmann, who writes in industry publications as "The Dough Doctor," said he has received an average of five requests per day for the past three months on how to make low-carb dough.

He said his own experiments so far with making a low-carb dough had turned out a product that tasted, well, different.

"If you consider a pizza crust as being an edible bread-like product that's located beneath the toppings, the cheese and tomato sauce, OK, that's all we can say about it. ... Wipe away any memories of your old traditional pizza crust," he said.

Steve Coomes, editor of pizzamarketplace.com, wondered if the low-carb craze would last and whether it was just part of New Year's resolution dieting.

"I still think that the vast majority of American pizza consumers are going to look at pizza and those side items like wings as an indulgence and will continue to enjoy them in their intended form," he said.

In Boston's Italian North End, talk of a low-carb pizza was viewed as sacrilege.

"In my culinary heart, I will never do low-carb," Salvo Goglio, 36, a native of Sicily and chef at Antico Forno, said while chopping zucchini in a cramped kitchen.

Brandishing a container of golden polenta, he asked, "How can you get low-carb and keep the flavor?"

Just then, an order came off the printer above the counter where Goglio was working: roast chicken on a salad, hold the bread. And it turned out that several members of the staff, including Goglio himself, had been "on the Atkins."

Still, Goglio said, "If you want to really eat good food, you can't cut down carbs."