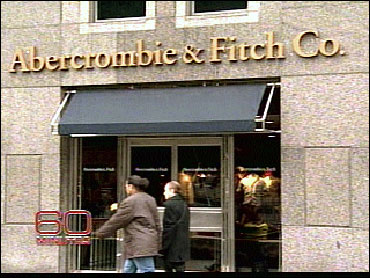 Before this year's holiday sales begin, Correspondent Morley Safer has a look at a story that rocked the world of retail last year.

Abercrombie & Fitch was charged with racial discrimination. And the once venerable clothier, which outfitted everyone from Teddy Roosevelt to JFK, has undergone a makeover. Here's his original report:

But all that fair hair and skin has made it a juicy target. It's being taken to court, accused of racial discrimination in their hiring. Does Abercrombie's all-American look exclude some Americans?

"All-American doesn't mean all-white," says Jennifer Lu, a student at University of California, Irvine, and a former salesperson at a Costa Mesa, Calif., store. Lu and several other young people say they couldn't get a job, or were fired because their look was not consistent with the store's look.

What exactly is the Abercrombie & Fitch look?

"It's dominated by Caucasian, football-looking, blonde-hair, blue-eyed males; skinny, tall," says Lu. "You don't see any African-Americans, Asian-Americans, and that's the image that they're portraying and that they're looking for."

Liu says she was fired after corporate officials visited the store, and, according to her, didn't like what they saw: "A corporate official had pointed to an Abercrombie poster and told our management at our store, 'You need to have more staff that looks like this.' And it was a white Caucasian male on that poster."

Anthony Ocampo says blacks, Asians and Latinos were sometimes hired by Abercrombie, but weren't given the opportunity to work in sales. "The greeters and the people that worked in the in-season clothing, most of them white, if not all of them, were white," says Ocampo. "The people that worked in the stock room, where nobody sees them, were mostly Asian-American, Filipino, Mexican, Latino."

The lawsuit alleges that Abercrombie hires a disproportionately white sales force, favors white employees for the best positions, and discourages minorities from even applying for jobs. But lawyer and conservative talk show host Larry Elder says too often cases like these end up in court.

"Abercrombie & Fitch ought to have the right to set their own policies, for good or for ill. Look, there's a restaurant called Hooters. Hooters requires you to have certain kinds of physical accoutrements," says Elder. "Will that do? And I think people understand that. Should they have a right to hire waitresses because they want to attract a certain kind of clientele who want to ogle at the waitresses? I think so."

But the young people who are suing say all that's irrelevant. They say companies like Abercrombie need to be reminded what being American is all about.

"An all-American look is every shade," asks Safer.

UPDATE: Just last week, Abercrombie & Fitch settled the class action suit against it for $40 million. As part of the settlement, the company agreed to create an office of diversity, and to recruit more black, Latino and Asian employees.