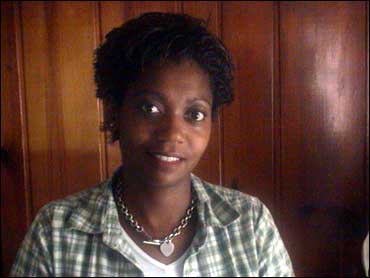 Kia Baskerville is a CBS News White House producer. She was traveling with President Bush when the terror attacks occurred on Sept. 11.

I went on the Florida trip at the last minute, replacing our White House Correspondent John Roberts. The day started out very early in the morning with the president jogging on a local golf course -- it was hot, muggy and too many mosquitoes. The most we were expecting from him was a brief comment on the day's topic -- education, and hopefully taxes -- if we were lucky.

A couple of hours later, as the presidential motorcade headed to President Bush's first event, I received a call on my cell phone from a producer who said that a plane had just hit the World Trade Center in New York. I honestly couldn't believe what I had just heard and fifteen minutes later I was standing in a second grade classroom with 20 students, who were getting ready to read for the president. He was visiting Emma E. Booker Elementary School in Sarasota. I received another phone call, this time from CBS Radio Correspondent Mark Knoller. "Kia, a plane has now crashed into the second tower of the WTC, so it looks like this is deliberate. You need to ask Bush about this."

After brief remarks, addressing the situation, the Air Force One travel pool was told to go back to the motorcade for an immediate departure. In five years of traveling with the White House press corps, I have never run so fast to avoid missing a presidential motorcade. On the way to the airport we listened to the radio with our mouths wide open in disbelief: not only had two planes crashed into the WTC complex but a commercial jet had just crashed into the Pentagon.

In our small, cozy cabin in the back of Air Force One, the 12 or so members of the White House travel pool did what millions of other Americans did that day: we turned on the news. As the plane flew on -- we knew not where -- we tuned into one local news report after another, using the plane's satellite TV system. We were not prepared for what we saw. As I looked at the faces of my colleagues, I saw they were all filled with fear and terror. Then the steward came by and took our drink orders. There isn't time to feel guilty about ordering a Bloody Mary at 10 in the morning, while you are flying on a targeted plane watching the World Trade Center collapse in front of your eyes.

After two hours, we should have been landing or starting our descent. We asked a passing secret service agent how high up we were and he told us 45,000 feet -- I thought to myself, we're not going home. After observing several on-board military personnel rushing down to a lower level compartment, Gordon Johndroe, a White House press aide, came back to tell us that a national emergency had been declared and they were evacuating the president. He then said, "Do not turn on your cell phones. The president will make a speech and we'll find a way for it to be broadcast; we'll keep a press presence with him. The president has spoken to Laura and the Vice President; he's making calls and preparing a statement."

With fighter jets on both wings, we landed at Barksdale Air Force Base in Louisiana. Scores of F-16's and B-52's were parked and looking ominous. Military personnel with large machine guns surrounded the plane. The press corps was rushed off and huddled under the wing while Ari Fleischer briefed us on what would take place next -- a second address to the nation.

After an intense, quick equipment and conference call setup, all five networks took the videotape live to air -- "Breaking News Specials." For those few minutes, as the tape played to air, there was an intense silence as everyone listened to what President Bush had to say. As it played, our military escort signaled us to wrap-up and prepare to head back to the base. By the time I returned to the base, Andrew Card had made the decision to take a smaller contingent of travel pool members on the rest of the journey – which did not include me. Ann Compton of ABC, the radio pool reporter for the day, would cover for TV.

So, as we stood on the tarmac, the remaining press corps and White House aides watched Air Force One taxi down the runway, headed for its next destination -- Offutt Air Force in Nebraska. At this moment so many things ran through my mind, including, "How will I get back home to my family with all airports closed to incoming and outgoing traffic?" But a plan was already in place to fly the remaining few of us back to Washington aboard a government transport jet used by the Cabinet.

At 5 p.m. on course to land within minutes at Andrews, I looked out the left side of the plane to see the sun beginning to set and smoke from the Pentagon still rising. Until you physically saw, with your own eyes, the devastation that had taken place it all didn't seem real. I was anxious to be on the ground, to call home, to check in at work, to just try and regain some sense of normalcy.

I checked in with my boss, Tom Mattesky, and got my marching orders: go to the White House. The president was returning and CBS was designated as pool for his Oval Office address to the nation at 9:00 pm. I was to assist our Special Events producer, Tom Seem. I had no idea I'd be cuing the president to go on worldwide television. By 7, I was at the White House. The president entered the Oval and began to practice reading his text from the prompter. He made it very clear that he wanted no noise and no movement. I had to interrupt his "train of thought" to let him know he will have to focus on me because I'd be giving him the countdown. Then it was time. "Thirty seconds, 15, seconds, 10, …5,4,3,2,1…" I said as I pointed my finger, signaling him to begin.

At the end of his address, I looked up to see a very somber man sitting behind the desk that belonged to many past, great leaders, and I realized that life was bigger than all of us, especially today. The president didn't speak or look at anyone for several minutes. He just sat there, as still as could be. My heart went out to him. He noticed my stare and affirmative nod (as if to say, it's going to be alright), and he proceeded to tell me what a nice job I had done. An exhausted smile grew on my face as he walked out wishing us all the best. It was a very proud moment for me, but also the saddest.

NEXT >>> Jules Naudet: Under Attack

Jury starts deliberations in lawsuit between Johnny Depp and Amber Heard
Thanks for reading CBS NEWS.
Create your free account or log in
for more features.
View CBS News In
CBS News App Open
Chrome Safari Continue
Be the first to know
Get browser notifications for breaking news, live events, and exclusive reporting.