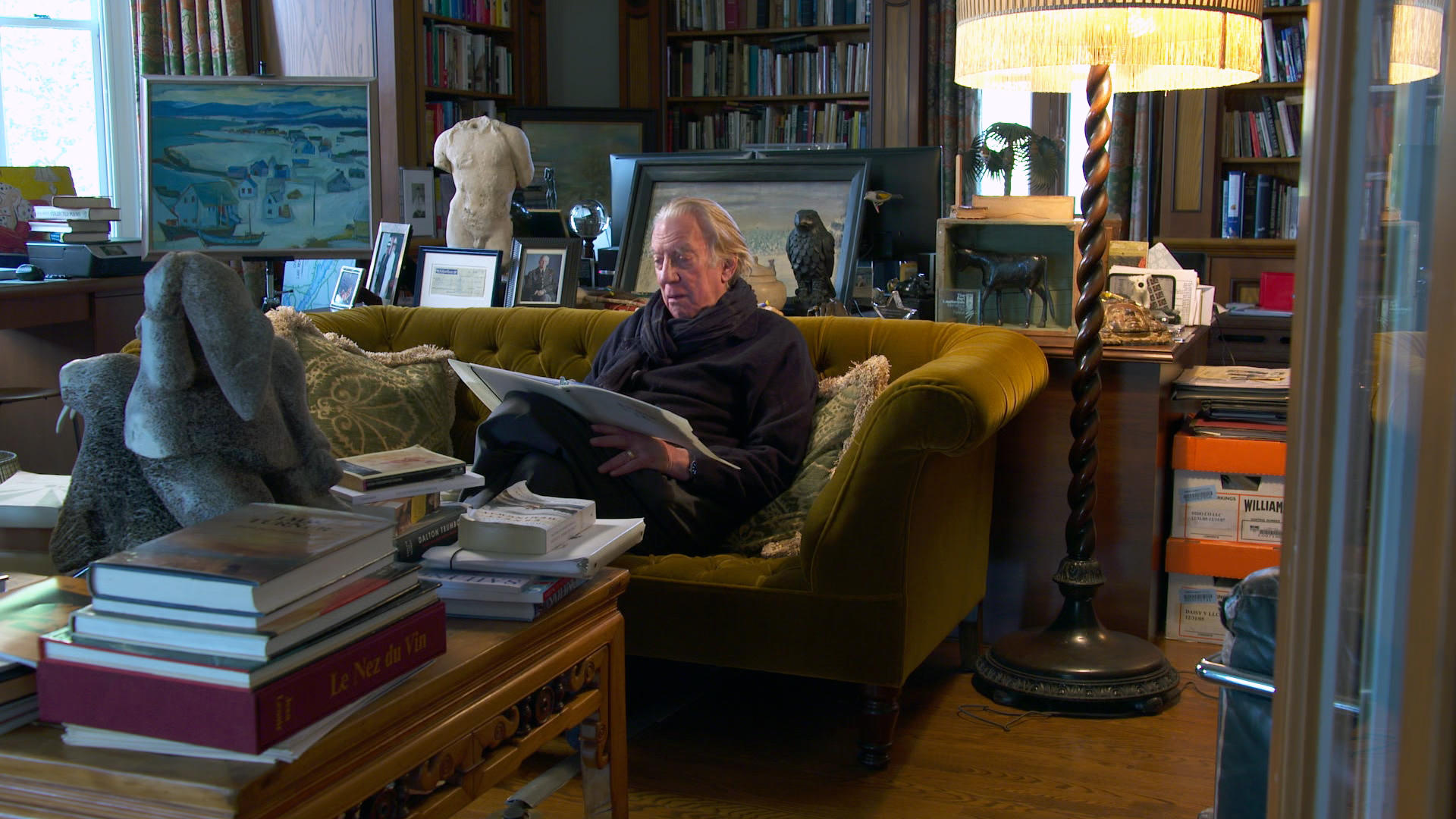 Donald Sutherland has been called one of the greatest actors never to be nominated for an Oscar. He's appeared in more than 150 films and TV shows -- "MASH," "Klute," "Ordinary People," "The Hunger Games" -- just to name a few. You may recognize his name, you've definitely seen his face, but you probably don't know much about Donald Sutherland, the man. At 82 he's still one of the hardest working actors around. He's still agonizing over each character he plays, and still plagued by self-consciousness about how he looks. He's never forgotten what happened after his very first film audition more than fifty years ago, when the writer, director, and producer of the movie he tried out for called him on the phone.

Donald Sutherland: The writer said, "You did such a terrific job. And the producer said, "We thought you were really wonderful. And we all wanted to call you together to explain to you why we weren't casting you." And he said, "No. No. No. I mean, we have to-- the reason why we're not casting you is because we've always thought of this fellow as a kind of-- a guy next door sort of guy. And to be absolutely truthful, we don't think you look like you ever lived next door to anybody." No. But it's the story of my life, you know.

Anderson Cooper: That's the story of your life?

Donald Sutherland may not look like the guy next door, but that hasn't stopped him from carving out one of the longest-lasting and most unconventional careers in the film business.

He's played leading men and all manner of misfits. He's turned up in Army field hospitals, English Country Estates and the toniest corners of Upper Manhattan

He's had a particular soft spot for bad guys, and over the years he's played a lot of them.

Anderson Cooper: A lot of the roles you take on though are not always sympathetic.

Anderson Cooper: They are?

Anderson Cooper: Even if it's a pyromaniac in "Backdraft?" Your eyes light up like a pyromaniac, right now.

Donald Sutherland: I'm sorry but Í mean he was so excited, you know?

Donald Sutherland in "Backdraft": Got the whole place going like hell. My hair was on fire, my hands. Everything. I was dead.

To prepare for these roles, he spends months immersing himself in the script, pouring over the parts as he conjures the characters to life.

Anderson Cooper: You try to find something in the role that--

"I said: 'Mother, am I good looking?' And my mother looked at me and went. 'Your face has character, Donald.'"

When we first met Sutherland, he was shooting a scene in Italy for an upcoming FX series called "Trust" about oil magnate J. Paul Getty.  When he's filming, Sutherland says he needs more than anything else, an intimate, creative relationship with his director. He describes his experience working with the legendary Italian director Federico Fellini as a love affair.

Anderson Cooper: Why do you see it in romantic terms?

Donald Sutherland: Because it is.

Anderson Cooper: And when the film is done, the affair is over?

Anderson Cooper: Do you have a cigarette after?

Donald Sutherland: No, but you have regret.

If there's a slight sadness about Sutherland it may be because his childhood in Canada wasn't easy. He survived polio as a toddler and spent all of fourth grade at home with rheumatic fever. He was an awkward kid. Tall with big ears, at school they called him Dumbo. When he was 16, he had a question for his mother.

Donald Sutherland: And I went to her and I said: "Mother, am I good looking?" And my mother looked at me and went. "Your face has character, Donald." And I went and hid in my room for at least a day.

Anderson Cooper: Did what she say stay with you?

Donald Sutherland: It's not easy, Anderson. It's not easy to know that you're an ugly man, in the business like I'm in.

Anderson Cooper: Do you think of yourself as an ugly man?

Donald Sutherland: Unattractive is a gentler way of putting it.

His insecurities didn't stop him from acting in plays in college. In the early 1960's he started picking up work in television and B-movies like "Castle of the Living Dead." You'd be forgiven if you've never heard of it. Sutherland plays the part of a soldier and a witch in the same scene.

The early years were a struggle. Sutherland had twins, including his son Kiefer, then three more children with his wife of 45 years, the actress Francine Racette.

His big break came in the "Dirty Dozen" and it happened entirely by chance. Sutherland only had a bit part until one of the lead actors told the film's director, Bob Aldrich, he didn't want to appear in this scene.

Donald Sutherland: And Bob Aldrich looked at him like that. Then, he went, "You with the big ears, you do it." I don't think he knew my name. But I, you know. It changed my life.

Donald Sutherland in "The Dirty Dozen": Where are you from, son?

Donald Sutherland in "The Dirty Dozen": Never Heard of it.

Hollywood producers saw star power in that brief role. He was offered a lead in "MASH," then played a hippy tank commander in "Kelly's Heroes," earning a place in Hollywood as an oddball icon of the early 70s counterculture.

Donald Sutherland in "Kelly's Heroes": There you go, more negative waves. Have a little faith, baby!

As his career took off, something happened that Sutherland still doesn't quite believe: the guy who grew up thinking he was ugly became a sex symbol.

In 1971 he played the enigmatic private detective in the hit "Klute," alongside his then-girlfriend, Jane Fonda.

Fonda won an Oscar for her performance, Sutherland wasn't nominated.

We were surprised to learn, Sutherland's never watched "Klute" all the way through, and he says he rarely sees any of the movies he stars in. His main interest he says is his performance, how the film ends up being put together is out of his hands.

Anderson Cooper: One of the nice things about the job I'm doing is-- I have a fair amount of control over the finished product.

Donald Sutherland: You do?

Anderson Cooper: Yeah. And that's not something as an actor you have much control over.

Anderson Cooper: You have no control over it?

Donald Sutherland: None. None, except in performance.

That may be a polite way of saying, if the film is a clunker, don't blame Sutherland.

Anderson Cooper: One critic about a television show you were in said, "The question is not just what a class actor like Sutherland is doing in trash like this, but whether Sutherland is actually in a different show entirely."

Donald Sutherland: What was the show?

Donald Sutherland in "Dirty Sexy Money": It's such an extravagant accusation to make.

Anderson Cooper: Is that something you ended up watching?

Anderson Cooper: Did you watch it?

Donald Sutherland: Uh no. But-- but--

Anderson Cooper: What do you mean, you didn't see it?

Anderson Cooper: So how do you know it was good?

We were speaking with Sutherland at his lakeside estate in Southern Quebec, where he steals time between film shoots. In an old pumphouse by the water…

We set up a makeshift screening room to watch some of his most iconic performances.

It quickly became clear to us that decades after he's finished a film, the character he's created stays with him. In this scene from the 1973 thriller "Don't Look Now," his character discovers his daughter's body in a pond.

Donald Sutherland: Uh this is gonna be a hard day for me.

Anderson Cooper: So even now, the character comes back to you. The character's still there?

Donald Sutherland: Yeah. Yeah. It's interesting, I-- I never thought of that. They must all have their little niche somewhere in my-- in my person or in my soul or something, yeah. Yeah.

Sutherland insists he's never given much thought to the trajectory of his own career or viewed it as a climb to stardom.

Anderson Cooper: A lot of actors, they wanna take on roles where they're--

Donald Sutherland: 'Cause they're vertically organized.

Anderson Cooper: What does that mean?

Donald Sutherland: It's actors who say, "Okay. I've done this."

Anderson Cooper: To kind of a career ladder.

Anderson Cooper: I've done a dramatic role. Now, I'm gonna do a comedic role, this or a romantic lead.

Donald Sutherland: Yeah. And mine is, like, a great, big wooden platter of fruits and pasta and chicken salad and a soup and-- a banana, you know. It's a whole bunch of different things. You might not like everything on the thing. But you can go and grab something and peel it and eat it and like it.

That may explain in part why Sutherland has never gotten an Oscar nomination, that, and his style of acting, which is subtle and restrained, never showy. The 1980 film "Ordinary People," won best picture, best director and an Oscar for the screenplay.

Mary Tyler Moore was nominated for an Oscar for her role in "Ordinary People," Timothy Hutton won one. Sutherland was ignored.

Now, at a stage in life when peers half his age are slowing down, Sutherland seems to be speeding up. After shooting one week in Italy, we met him again on a soundstage in Los Angeles where he was filming scenes for an upcoming science fiction movie.

Next month, he has a new film coming out: "The Leisure Seeker."

In which he plays an aging professor, alongside Helen Mirren, who embarks on a road trip as he grapples with old age and dementia.

Donald Sutherland: He may be the nicest man I've ever played. Who was losing his mind. And totally and utterly in love with his wife.

Anderson Cooper: It's very bittersweet about, things slipping away, about love and aging and-- did-- did it resonate?

Donald Sutherland: What do you think, Anderson? Just look at me. Sure, you know, all of it. Every bit of it.

We won't know until January if Donald Sutherland will get an Oscar nomination for "The Leisure Seeker," but last month, he finally got that little golden statue which has eluded him so long. A lifetime achievement award, presented to him by his Hunger Games co-star Jennifer Lawrence in a special ceremony in Hollywood. His family, almost all of whom are in the film business, was there to cheer him on.

Donald Sutherland accepting Governor's Award: I finally found peace in the words of the great Benjamin Kubelsky, who is also known as Jack Benny when he said, as I say to you now: 'I don't deserve this, but I have arthritis and I don't deserve that either.' Thank you.