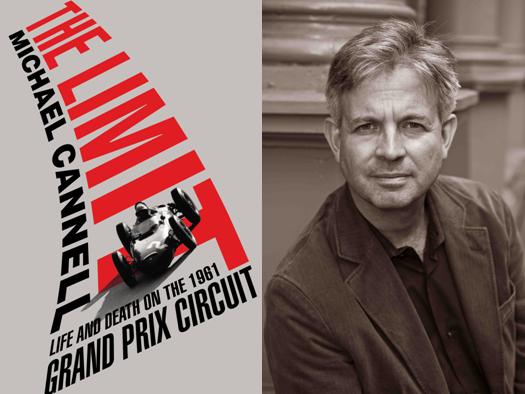 Jeff Glor talks to Michael Cannell about, "The Limit," the incredible story of the 1961 Grand Prix circuit, when a lowly American mechanic took on the big boys of European racing - and won.

Jeff Glor: What inspired you to write the book? Michael Cannell: Photographs drew me into this story originally. While working as an editor at The New York Times I saw a compilation of photos from the European racing circuit in the 1950s. Back then many drivers came from prominent European families. Wives and groupies sat in the pits wearing Capri pants and tight cashmere sweaters. But the glamour was closely accompanied by a dark aspect. First I was seduced, then obsessed.

JG: What surprised you the most during the writing process? MC: Today we live in a safety-conscious culture. It's hard to fathom the dangers that drivers routinely faced half a century ago. For the most part, they drove without flameproof coveralls and roll bars. Their helmets were flimsy cork constructions. Believe it or not, they did without seat belts; the drivers wanted to be free to leap from the car if it burst into flames. Most shocking of all, they often raced with brakes so depleted that they would hardly have stopped a bicycle.

JG: What would you be doing if you weren't a writer? MC: My first job out of college was writing obituaries on a small newspaper in Virginia, and I've been a reporter or editor ever since. So I'm honestly unsure what I'd do. I'm sadly without a fallback. So I guess I'm going down with the ship.

JG: What else are you reading right now? MC: On my bedside sits "Hemingway's Boat: Everything He loved in Life, and Lost, 1934 - 1961" by Paul Henrickson. It's a book so evocative and sonically pitch perfect that I want to read every paragraph twice. On subways and buses I'm reading the biography of Steve Jobs by Walter Isaacson - on my iPhone, appropriately enough.

JG: What's next for you? MC: "The Limit" might be called a double biography. It's the story of two lives on a collision course. I'm working on a proposal for a non-fiction book with a similar architecture: two men intersect under tragic circumstances.