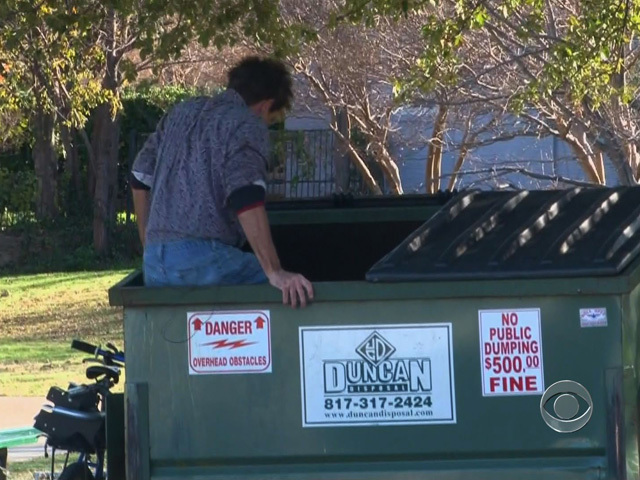 Over the course of the year, Americans will generate well over a ton of garbage -- 250 million tons of garbage, to be more precise. But one man's garbage is another's treasure, especially in Fort Worth, Texas, as CBS News correspondent Jim Axelrod reports.

Like so many of us around this time of year, Jeff Ferrell's got his mind on gifts.

For his wife Karen, it's nothing but the best -- like a necklace from Neiman Marcus. "I wore this to a Christmas party," she said. "It was the hit of the evening."

But for Jeff Ferrell, "top shelf" is actually the bottom of the dumpster.

"Christmas is a really good time of year to think about not just our consumption," he explained, "but what we do with the things that we don't want any longer."

Ferrell, a sociology professor at Texas Christian University, is a professional dumpster diver.

"Part of my ritual each day, along with writing and teaching is a two-hour bike ride," he said. "I hit maybe 50-100 dumpsters."

For the last 20 years, this avid environmentalist has been a Texas-sized recycler, finding all kinds of things on his daily refuse-ride. Ferrell gathers his finds and gives them away.

"Two of biggest problems we have right now in our society are waste and people in need," he said. "My notion is that I can take the first problem to help solve the second problem. "

Most of the time, Jeff's reclaimed items go to shelters and charities.

"I found these, these are actually blankets," he said as he handed them to a woman at a mission.

But this time of year, they become gifts for family and friends.

"It's a lot like knowing Robin Hood," said Carol Thompson, a fellow professor at TCU. She received vintage jewelery, silver and even designer glass from her friend, the high-class garbage picker.

"Sometimes I think that if Jeff came over and saw this in the trash, he would not be happy [and] pull it back out," she said.

Even Ferrell's parents don't get their presents from the store.

"This is a found item," said Gil Ferrell, who points to a jacket that he is wearing.

Added his wife Doris: "It was brand new. I didn't even have it cleaned. It hadn't been worn."

Monday morning, Jeff Ferrell will be up and at 'em. If you think the malls are busy with returns the day after Christmas -- try the life of a dumpster diver.

"Christmas shouldn't be the worst most wasteful day of the year, but it really is," said Ferrell.