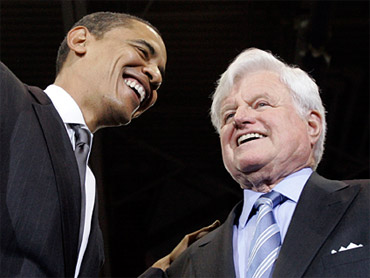 Michael Knox Beran is a contributing editor of City Journal. He is the author of The Last Patrician: Bobby Kennedy and the End of American Aristocracy and Forge of Empires 1861-1871: Three Revolutionary Statesmen and the World They Made.

That Senator Kennedy's death was imminent could have been guessed from the statement issued earlier in the week that President Obama had no plans to visit him during his vacation on Martha's Vineyard. Had the senator been in a condition to receive him, the president would almost certainly have gone to Hyannis, from personal affection, certainly, as well as from gratitude, but also in the knowledge (surely forgivable in a practicing politician) that a torch-passing ceremony would be useful just now in the struggle to get a health-care bill.

The image of the old senator on his deathbed, the lion in winter laying hands on his protégé in the cause of liberal reform, would doubtless have been a powerful one. Yet the idea that Senator Kennedy was among the greatest of the Senate's "lions" must be regarded with skepticism. The testimony concerning his efficacy comes mainly from other senators, and the Senate, Henry Adams observed, "is much given to admiring in its members a superiority less obvious or quite invisible to outsiders."

The Senate is a seniority system; success is largely the result of staying alive, and staying in office. If Kennedy shone brilliantly in the chamber, it was only in comparison to the less candescent glow of such superannuated coevals as Byrd and Inouye, who did not have the good fortune, as the late senator from Massachusetts did, to enter the body at age 30, and so were past their prime when they reached the highest pinnacle.

Kennedy's lionhood may well be doubted, but his passing unquestionably marks the end of an era. He was the last surviving son of Joseph P. and Rose Kennedy, and it is this distinction that has made his death more noteworthy than it would otherwise have been. His place in the dynasty has little to do with it; the Kennedy ascendancy was less a dynastic succession than the lengthened shadow of an idea. It was never a political idea; it was rather an image or, as Kennedy loyalists prefer to call it, a "dream," a picture bound up with the youthful elevation and early death of John F. Kennedy. What remains finally memorable about President Kennedy, William F. Buckley Jr. said, is the image of martyred beauty. The late president was the St. Sebastian of American politicians, and his heirs and assigns have been drawing on his political capital for nearly half a century now.

After Kennedy was assassinated, his friend Bill Bradlee published, in a book called That Special Grace, a column he wrote for Newsweek in the aftermath of Dallas. Bradlee was writing on a deadline, and the copy he produced was not very good: "Kennedy was a wonderfully funny man, always gay and cheerful, never mean - but historians are prone to stifle laughter in formality . . . "

You get the idea. But Bradlee was surely right when he argued that "grace" was the essence of John Kennedy's appeal. "Of all the men I ever knew in my life," Lord Chesterfield said, "the late Duke of Marlborough possessed the graces in the highest degree. . . . He had no share of what is commonly called parts. . . . He had most undoubtedly an excellent good plain understanding with sound judgment. But these alone would probably have raised him but something higher than they found him." It was "the Graces that protected and promoted him."

What Chesterfield called the "graces" we now call "charisma." It is a sort of charm borne up by luck. Thus the question Napoleon, brushing aside more prosaic credentials, is said to have asked about a prospective commander: "Has he luck?" The Kennedys had their own word for this mysterious combination of grace and fortune. After Bobby's death in 1968, his widow, Ethel, watching her oldest boy, Joe, greet mourners on the funeral train, was momentarily happy. "He's got it!" she is said to have exclaimed.

But in fact only two members of the family had "it" in an exceptional degree - the late president and the sister to whom he was most attached, Kathleen "Kick" Kennedy, who married William "Billy" Cavendish - the Marquess of Hartington, the eldest son of the Duke of Devonshire and scion of the great Whig family. (She died in a plane crash in 1948.)

None of the other siblings had so pronounced an appeal. The eldest brother, Joe Jr., who died young and heroically as a naval aviator in the Second World War, was not nearly as charming as Jack; he was the firstborn, and he was burdened from his earliest years with the weight of hereditary ambitions. He developed all the pushing political instincts that disfigure youthful aspiration. Bobby, the next boy after Jack, knew that he lacked his brother's magic, yet he tried, as so many politicians have done since, to counterfeit his manners and gestures. Secular grace, however, knows no apostolic succession, and the style proved incommunicable.

Ted, the youngest brother, was in some ways the most amiable of the Kennedy boys. But nice-guyishness is too common a quality to obtain for its possessor historic fame, even when, as in Ted's case, it is allied to money and power. Except for the accident of consanguinity, Kennedy's name would soon fall into as deep an obscurity as that which has consumed the reputations of such late senatorial eminences as Warren G. Magnuson and Carl Hayden.

It is a credit to his tactical shrewdness that Senator Kennedy found another hedge against oblivion. During the campaign last year, he anointed Barack Obama the Fifth Kennedy Brother. It was a good bet. As a result the president who owes so much to the late senator, and whose politics so closely resemble the late senator's own, will do his best to keep Teddy's torch from going out. If you seek Kennedy's monument, you will no doubt find it in the health-care reform act of 2010.

But President Obama may in time find it to his - and to his country's - benefit to fix his gaze not on Ted, but on Jack. For in addition to his more superficial graces, President Kennedy possessed a degree of wisdom, which might be defined as grace of judgment. John Kennedy's sentiments were liberal, but he knew that a wise president must have the country in his bones, must feel, as by instinct, the temper of the people, and must know what they will bear and what they will not. He was annoyed by those who, like Arthur Schlesinger Jr., urged him to be another FDR. Schlesinger, he said, wanted him to act as if it were 1932. But three decades had passed since 1932; the mood of the people, President Kennedy knew, had changed.

President Obama, if he reverences the memory of Ted Kennedy, would do well to eschew his politics. In joining the battle for health-care reform, Obama has entered on what promises to be the climacteric of his presidency. At so critical a juncture he needs to emulate, not the intoxicated extravagances of the late senator, but the sober moderation of his older brother, who knew that the world has indeed changed since 1932.