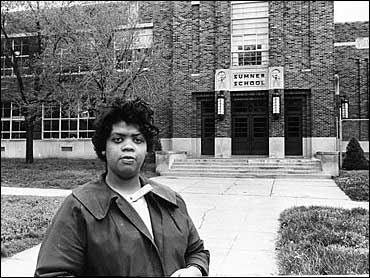 Linda Brown had no idea she was making history in the fall of 1950 when her father, the Rev. Oliver Brown, took her by the hand and marched her to in an all-white school near her home.

Several other black parents in Topeka also tried to enroll their children in all-white schools that fall. Their requests were denied, laying the groundwork for a legal case that would overturn segregated education nationwide 50 years ago Monday.

Aides said Mr. Bush's speech will pay tribute to those who helped end what he'll call "a great wrong" — and talk about the progress America has made in the half-century since the ruling. However, he'll caution work remains to be done to achieve the goal of equal opportunity for all Americans.

In the years since, Brown vs. Topeka Board of Education has been a blessing and a burden for the Brown family: A blessing because the family helped change history; a burden at times because of media attention it brought.

Linda Brown, now Linda Brown Thompson, has mostly shied away from reporters, although she has spoken at several events in recent months in anticipation of the 50th anniversary of the ruling.

She and other family members have stressed that their story is just one of many in the struggle for racial equality.

Linda grew up in a racially mixed neighborhood, where the children played with white, Hispanic and black youngsters, said her mother, Leola Montgomery, who remarried after her husband's death.

When Linda began attending a segregated school 20 blocks away, the children were confused because the all-white school was only five blocks away.

"She was always sad every year when it was time for school that she had to go one way and her playmates the other way," Montgomery recalled. "It was just silly to think they couldn't go to school together."

Now 83, Montgomery said her late husband was reluctant at first when a former high school classmate and local civil rights attorney asked him to become a plaintiff in a desegregation case. Of 13 plaintiffs in the case, he would be the only male and was hesitant to "be in there with all those women," she said.

But the attorney, Charles Scott, persisted. "He said for the good of all children as well as your own you need to get into this," Montgomery recalled.

The lawsuit was joined with cases from Delaware, South Carolina, Virginia and Washington D.C. and became known as Brown v. Board of Education because Brown's name was the first alphabetically.

Elsewhere in the country, angry whites terrorized plaintiffs in parallel cases, making it hard for them to make a living. In Clarendon County, S.C., the home of the minister who organized the lawsuit was burned down.

In contrast to other parts of the country, where riots broke out over the Supreme Court ruling, schools in Topeka opened to all races fairly peacefully.

The Browns experienced no backlash, "not any whatsoever," Montgomery recalled.

The plaintiffs lost at the federal court level and the case was appealed to the U.S. Supreme Court along with the four other school challenges.

Almost three years passed before the U.S. Supreme Court ruled the "separate but equal" doctrine had no place in public education.

Montgomery heard the news on the radio as she was ironing.

"I could hardly wait for my husband and children to get home so I could relay the message to them," she said. "Oh boy everyone was happy. The children were jumping."

Montgomery said Linda Brown was already headed to junior high school when the court ruled. In Topeka, the upper grades already were integrated.

The case also led to the desegregation of hotels, lunch counters and other public places.

"Of course we never thought about that at the time, that all this would be the outcome of the decision," Montgomery said.

Oliver Brown died of a heart attack in 1961 while he was a minister at a church in Springfield, Mo., where the family had moved two years earlier. After his death, the family returned to Topeka.

"I'm so sorry he didn't remain alive to see and be a part of it," Montgomery said. "But that is what happens sometimes."

His daughters are carrying on the legacy. Linda Brown plays piano at the Topeka church where her father was a pastor. She helps her sister, Cheryl Brown Henderson, with the nonprofit Brown Foundation. It is housed in Linda Brown's former grade school, which has been transformed into a national historic site.

During a speaking appearance in March in Laramie, Wyo., Linda Thompson said "de facto segregation" remains a half century after the ruling because of economic segregation.

"On May 17, 1954, the Supreme Court gave us a chance to consider what is possible in American life," reports CBS News Legal Analyst Andrew Cohen. "It gave us an opportunity to embrace the better angels of our nature."