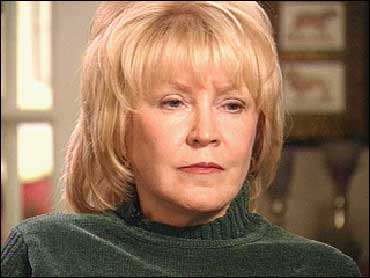 Strange things have happened to the men in Catherine Shelton's life. Her husband was convicted of murdering the spouse of one of her former employees. Was she involved?

One thing almost everyone agrees on is that this Texas lawyer is very smart, and she's mastered using the law in her own defense. Last fall, Correspondent Richard Schlesinger reported on this story of murder and betrayal.

A shooting outside Dallas more than three years ago opened the latest act in a long-running melodrama of death and betrayal.
Marisa and Michael Hierro were shot outside their home. Michael died at the scene, but Marisa lived, and says she still remembers what one of her assailants said that night.

Catherine Mehaffey Shelton is Marisa's former boss, and a criminal defense attorney in Dallas. Since the Hierros were ambushed in 1999, Shelton has never been charged with the crime. She says it's because she didn't do it: "I've never killed anybody. I don't know anything about it."

"She thinks she's untouchable. And she has a right to think that now, because she's done it again," says Marisa.

Shelton didn't want to talk about her past, but her personal story is a Texas-size saga that spans 30 years with accusations involving -- among other things -- panty hose, a pistol and a porta-potty.

"I don't ever look back at anything. Why would I," says Shelton. "Life is an adventure."

Life has certainly been an adventure for some of the men in this lawyer's life. Back in the '70s, one of her former boyfriends was bludgeoned to death. She shot another ex-boyfriend in the back, and another ex's apartment burned down. But there's more. A man named with Shelton in a lawsuit was found with a bullet in his head. And a former client who accidentally hanged himself was found in Shelton's house, dead and naked.

"I'm in the middle of life. And I'm supposed to work through this and work these things out," says Shelton. "And do the best I can. It's not for me to reason why."

Shelton, then Catherine Mehaffey, was just beginning to make a name for herself when private investigator Kent Ferguson first heard of her. In 1979, the family of a Houston doctor named George Tedesco hired Ferguson to investigate his murder.

"He was beaten to death violently in his garage. His body was left there," says Ferguson.

Shelton had dated the doctor shortly after she started practicing law. When they broke up, she sued him for divorce, claiming to be his common-law wife.

"According to my investigation, they dated approximately three to four months," says Ferguson. "I found no one who ever said that they lived together."

Around the time Catherine's divorce was filed, Tedesco reported someone had come into his townhouse and taken some property. Ferguson said Tedesco named Shelton as the primary suspect.

Shelton admitted taking things from Tedesco's home but called it community property. Approximately a year later, on the very day Shelton's divorce case was to be heard, Tedesco's battered body was found in his garage. The divorce was no longer an issue, but Catherine now claimed to be a common-law widow. She went after the estate and lost.

That case was closed, but the murder case wasn't. No one has ever been charged.

Tedesco's family filed a wrongful death suit against Shelton and one of her clients, Thomas Bell, who had been caught with some of Tedesco's property. But the lawsuit never made it to court -- and neither did Bell.

"He was found shot in the head by a 357 magnum. Police ruled it as a suicide as a result of playing Russian roulette," says Ferguson.

But it was one more death of one more man associated with Shelton. She was never implicated in Bell's death, but it added to her reputation as a woman with a past.

Even before she began making headlines, Shelton was making a lasting impression on some of the men she dated.

Attorney Ferris Bond briefly dated her in the early '70s. He says when it came to Shelton, breaking up was very hard to do.

"It was God awful. It's the worst thing I've ever been through," says Bond of their relationship. "Probably the worst thing was burning my apartment and all of my possessions up. She stole my automobile, shot at me with a shotgun."

Shelton has denied doing anything wrong to Bond, but he says he finally got away from her by joining the Marines: "Frankly, I didn't think there was any way she'd follow me into the Marine Corps."

Shelton refused to talk about Bond or Tedesco, but she admits she may be too much for some men to handle: "I think it's my propensity to say exactly what I think to them at a certain point when I just can't hold it in any longer."

Does she hurt other people? "Well, I don't intend to," she says.

Shelton began practicing law in the '70s, and she was known as one of the most attractive criminal defense lawyers in Harris County, Texas.

When her ex-boyfriend was murdered in 1979, she attracted even more attention, particularly from one member of the press.

"She was a hot item at the courthouse. She was intriguing," says Houston reporter Gary Taylor. "Because of the mystery of her past and the danger that seemed to be lurking underneath."

Shelton doesn't care to remember Taylor, but he found her unforgettable. "It was like playing in fire," he recalls.

They started dating, and at first, he says it was fun. But within weeks, he said he started seeing another side to Shelton, one that she couldn't control. He also said that she kept talking about Tedesco's unsolved murder. "I heard her say this to several people," says Taylor. "'You better do what I say. You know what happened to George.'"

Taylor went to his friends at the Houston District Attorney's office who were still investigating the Tedesco case. He suggested that he and his roommate secretly record Shelton on the telephone. One tape became notorious when Taylor's roommate played it in the courthouse pressroom.

On the tape, Shelton is heard demanding that Taylor stop talking to the D.A. "He's got to beg for my mercy," she says. "I've never killed anybody in my life! I never really wanted to, but he's doing so much to me. He better stop!"

"The tape was always known in the press room as the 'Exorcist' tape," says Taylor. "She was very dramatic. She liked to tell me that I had entered the arena of death. And that's a direct quote."

Strange things started happening to Taylor. Like Tedesco, he discovered his home was burglarized, and he says Shelton offered to help get back his stolen belongings. Shelton told him to come over to her place, where he found his things in her bedroom closet.

"It was so outrageous, but I did it. I went back and I got in the closet. As soon as I got in the closet, the lights went out and I heard a gun click," says Taylor.
He says he turned around, and then saw Shelton: "She took a policeman's position like this. There was a hazy look in her eye. It was a pretty spooky look, and she started telling me about how this was it, this was how it was gonna end."

Taylor says he tried to defend himself with the only thing available, a chair.

"I went straight at her with the chair like a lion tamer. She fired off a round, a bullet came through the chair and nicked me. And I threw the chair at her, and ran down the hallway," says Taylor, believing that he was running for his life as he bolted for the front door.

"I opened the door and that's when I felt the shot in the back," says Taylor. "She blew me out through the door. And I can remember lying there on the ground thinking,'That bitch shot me. She really shot me.'"

He got up, he says, and started running again - three blocks before he got help. "I found out later that the bullet stopped, they told me, a centimeter from my heart, dead in the center," says Taylor.

Shelton was arrested, and for the first time, she found herself facing a serious charge -- attempted murder. At her trial in 1980, her legal team argued that she shot Taylor in self defense, and said Taylor was a snake for making those secret tapes. Shelton never took the stand, and the jury was deadlocked.

But at her second trial, Shelton testified and the jury got an earful.

"Catherine's uncontrollable. When you ask Catherine a question, there's no telling what's going to come out of her mouth," says her attorney, Jim Skelton.
Shelton claimed Taylor held a gun on her, and said she was trying to get away from him even though Taylor ended up getting shot in the back.

The jury reached a guilty verdict in little over an hour. Shelton was sentenced to 10 years, but her conviction was overturned on appeal. Rather than go through a third trial, Shelton pleaded guilty to aggravated assault. She got probation and she was temporarily barred from practicing law.

Taylor now edits an online publication, and has not seen Shelton for more than 20 years. She is out his life, but still on his mind. So Taylor has put private investigator Kent Ferguson on a most unusual retainer. "Basically, I've retained him to investigate my murder should it happen," he says.

Shelton says Taylor recovered quickly: "While I regret the incident and I don't go around shooting people, it was in the nature of a minor traffic accident."

She still stands by her testimony but doesn't care to discuss the details: "I really rather not go into that [the shooting] because really I can't even remember, to tell you the truth."

Was Leslie Mueller's drowning death a tragic accident or murder?