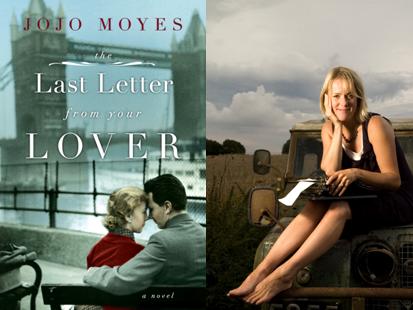 Jeff Glor talks to Jojo Moyes following the release "The Last Letter From Your Lover," a novel about love lost, and love found.

Jojo Moyes: Well, I'd had a hankering for a while to write a properly romantic book - a book that read like a black and white movie, with snappy dialogue and an epic sweep. But it actually started in a restaurant, when I found myself eavesdropping on a group of women who were trying to decipher a text message. Like most writers I'm horribly nosy, and I became fascinated by their debate about whether the man who sent it was keen or not. It went on for hours. What made me laugh was discovering at the end that the text message simply said: "Later X".

At around the same time my gorgeous 20-something cousin confessed she had never received a love letter. Nor had most of her friends. It got me thinking about how my generation might be the last to write love letters, and how new technology may have actually muddied the waters of romance. I just can't believe a facebook update or a texted booty call has the same emotional impact, or lasting joy of a handwritten letter, tied with ribbon and hidden lovingly in a box somewhere.

JM: How much I enjoyed writing a real, no-holds-barred love story! I especially loved writing the letters between the two separated lovers. I also really enjoyed doing the research. I plastered my office walls with copies of newspapers from the late 1950s and early 1960s - the "Mad Men" era - and used the names, the advertisements and news stories as a backdrop for the plot.

JM: A couple of years ago, I did think about being a midwife. Or a mounted policewoman. But like most alternative careers, I usually find myself thinking: "Oh, you could write a really good book about that". Ten books in, I think I'm pretty much ruined for anything else.

JM: I just started George R.R. Martin's "A Game Of Thrones" after becoming mildly obsessed by the television series. But I read very little when I'm halfway through writing a book; if what you're reading is too good, or has a really strong voice, it can be really disruptive.

JM: Well, I'm finishing my latest book, called "The Girl You Left Behind." And "Last Letter" has been optioned by a film company, so I'm excited about seeing the script and keeping my fingers crossed that it makes it to the big screen. At home, though, I'm just packing school lunches, looking for stray socks under the sofa and chasing horses around the farm.