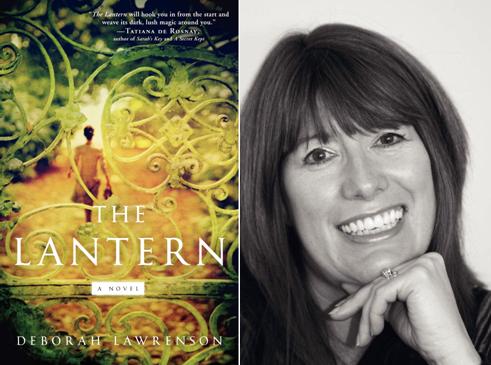 Jeff Glor talks to Deborah Lawrenson about "The Lantern," her gothic novel of mystery and murder set in the South of France.

Jeff Glor: What inspired you to write the book? Deborah Lawrenson: Re-reading "Rebecca" by Daphne du Maurier and feeling the story overlapping in my mind with a crumbling house in the South of France we had just bought, a beautiful old property that had been empty for several years and was decaying around us. We were about to commit a huge chunk of our life savings into restoring it, and it felt as if we were taking a huge risk with a new relationship - not one between husband and wife, but with this tiny rural hamlet in the Luberon. Then, it was the realization that there is always a strip of Braille on packaging used by beauty product company L'Occitane en Provence. I've always loved perfume, and the idea of writing about blindness and scent grew from that.
JG: What surprised you the most during the writing process? DL: What always takes me by surprise during the writing of a novel: the way the subconscious mind can present its issues in the themes and details. Sometimes I don't even see it until I've finished writing. I don't mean that the book should be read as autobiography - though the setting and landscape are real - but as in my answer above shows, I did feel a sense of recklessness and the unknown. "The Lantern" is also about loss of sight, both real and metaphoric. I realized that I've had a fear of sudden blindness ever since we had a scare in our family when I was a child and I was terrified that this would mean the end of our life as it had been. In my ignorance, I thought that the outcome would be straight from the pages of a Victorian gothic melodrama. In the end all was well, more or less, but I still have a morbid tendency to overreact to flickers of light and anything that seems to disrupt my vision.

JG: What would you be doing if you weren't a writer? DL: I would love to train as a forensic linguist. The idea of being a word detective is very appealing. It involves close analysis of texts, most often in criminal and legal cases, looking for patterns and personality clues, contested meanings, subliminal interpretations, hints about motivation and current situation - all there between the lines and in the choice of words. Of course, any writer is also playing with precise language, trying to find exact shades of meaning to communicate the story, and this is what I really enjoy. A forensic linguist is just the other side of the coin: the close reader rather than a writer.

JG: What else are you reading right now? DL: "The Immortal Life of Henrietta Lacks" by Rebecca Skloot. This is absolutely brilliant! What an engaging and fascinating and heartbreaking read, on so many levels. I've just finished "The Sense of an Ending" by Julian Barnes. I love to read Barnes because he is such an elegantly precise writer and a master of sly humour. Even though this is only a short novel, it took me quite a few days to read because I kept stopping along the way to admire and work out what exactly makes his sentences so good. And for research purposes, I have "Gardens of the French Riviera" by Louisa Jones, with breathtaking photos by Vincent Motte. The gardens are full of colour and warmth, with inspiring details in gorgeous places - what more could you want for inspirational armchair travel?

DL: Another novel set in Provence - actually, make that two novels. At the end of summer I sat down to write using a detailed synopsis, but as I got further into the first draft, I realized that one aspect of the story would stand much more powerfully on its own. So that has now become the next one, and my work so far has been bumped down the queue. These books will form a loose trilogy with "The Lantern." So I'm currently writing about Marthe Lincel and how her career as a creator of perfumes began in the most dangerous days of wartime France when the tide was turning against the Occupation. The perfume factory is at the heart of a Resistance cell, with secret night flights flown by the Allies dropping weapons into the lavender fields and landing to collect escaping airmen and agents. But brutal reprisals mean anyone involved lives in constant terror of discovery. It might sound like a far-fetched adventure yarn, but part of it is based on a true story.


For more on "The Lantern" visit the Harper Collins website.