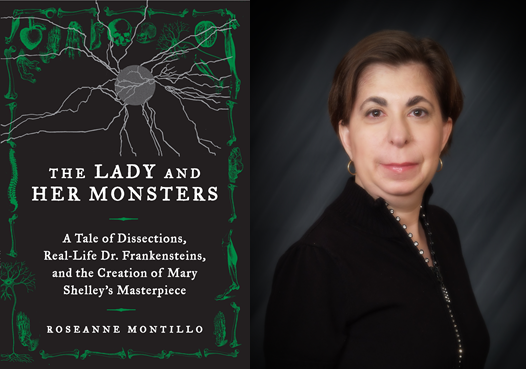 Jeff Glor talks to Roseanne Montillo about "The Lady and Her Monsters: A Tale of Dissections, Real-Life Dr. Frankensteins, and the Creation of Mary Shelley's Masterpiece"

Roseanne Montillo: I was hired by Emerson College to teach a class called Forbidden Knowledge. "Frankenstein" was on the syllabus. My students were all incoming freshmen, and although I knew that most of them were already familiar with the book and the legend behind it -- Mary Shelley having written it after her dream on Lake Geneva -- I felt that they needed to know that the text was actually heavily influenced not so much by that dream, but by the belief that you could actually bring people back to life. By the science, medicine, experimentation and religion flourishing around her.

RM: Although the experiments in galvanization and anatomization were mainly performed by men, what surprised me the most was that they were supported by women. Most people who attended Giovanni Aldini's so-called "performances" in galvanization, both in Italy and in England, were women. Although this seems odd to some readers, it actually made a lot of sense. This belief in reanimating the dead occurred at the tail-end of the French Revolution, a time when the loss of young men was great and many women had been left without their significant others. This loss affected them in many ways, not the least of which was financially. Of course, it made sense they would want to see with their own eyes if the dead could come back. In so doing, their husbands, fathers to their children, lover and provider, could make a return. Eventually, it wasn't surprising to find evidence of women taking center-stage during these "performances."

RM: Writing is the only thing I ever wanted to do. I also teach, and in a way that seems an extension of writing. Many of my students are writers themselves, so there is a wonderful connection and exchange of ideas between us that fosters creativity.

RM: I'm researching and writing a new book with the Great Boston Fire of 1872 as a backdrop. A real-life murder mystery and the friendship between Dr. Oliver Wendell Holmes and Herman Melville, the influence those events had on insanity cases, juvenile court system, prison reform, and of course, literature.

For more on "The Lady and Her Monsters," visit the Harper Collins website.