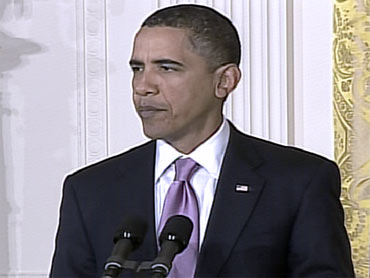 (CBS)
In a numbers-driven society, nuanced reflections about presidential job approval will only go so far. In the end, it always comes down to the final numbers - and the newest poll numbers about Barack Obama are not good.

Mr. Obama's approval rating is now 46%, the first time it has fallen below 50% since he became president one year ago, according to the latest CBS News poll.) For an administration that swept into Washington with high hopes - don't they all? - the results are a rebuke to a political leader who championed the slogan, "change we need." The irony is that President Obama's job approval ratings have suffered even as he has tried to push through an ambitious agenda in Congress to force the very change he promised. If you interpret the numbers as an interim report card, this isn't one to trumpet.

Let's put in another way: The public is handing out the lowest grades of Mr. Obama's presidency for the way he's handled his his two biggest policy challenges - the economy and health care reform.

Only 41% of the public still says that it approves of the way the president is handling the economy. Meanwhile, 82% describe the economy as being in bad condition. What's more, just 36% support the way he has handled health care reform while 54% disapprove.

The one consolation for Mr. Obama: 31% of the public thinks the economy is getter better, compared to 5% who thought things were improving last February.

With the benefit of 20-20 hindsight, the plunge in Mr. Obama's approval ratings now seems as if it were preordained. Unlike most other first-year presidents, Mr. Obama assumed office with the economy in its worst trough since the 1930s Depression. He quickly spent much of his political capital moving on an ambitious domestic agenda, but just as quickly ran into a wall of opposition over the $787 billion stimulus bill. The GOP dunned the new administration for being profligate and warned that the president was saddling future generations with trillions of dollars in debts. Mr. Obama's economic team argued that the government had little choice but to move dramatically to help kick-start the nation's economic engine and fill the vacuum left by the private sector.

Although the stock market is up sharply since then and the macro data are improving, the rebound remains sluggish. For an apprehensive public worried about job growth and confused about whether the glass is half full or half empty, the president gets no prize for preventing an even worse collapse.

Conservatives and independents were also alienated after the White House got involved in a counter-productive tiff with their favorite network when Fox News got accused of functioning as "a wing of the Republican Party."

The perennial left-right divide widened during the subsequent rancor over health care insurance reform, which found its expression in the protests orchestrated by the tea party movement and statements like that of Sen. Jim DeMint (R-SC) that Republicans should seek to turn the debate over health care reform into Mr. Obama's "Waterloo."

The partisan bickering reached a climax in a bitter Christmas Eve denouement to the first year of the Obama presidency. All this has eroded the president's support. Only 13% of Republicans now approve of his performance in office. Mr. Obama's support among independents has fallen to 42% - a decline of 10 percentage points in the last few months, according to the poll results. Although the president retains the support of eight in ten Democrats, he is also getting an earful from the left wing of his party on a myriad of issues, like the closing of the Guantanamo Bay prison facility or for being too cozy with Wall Street.

Public opinion could still swing back in the president's favor if the economy stages a Lazarus-like revival. But those sorts of miracles come few and far between. (And did I mention that he's also got a few other tests ahead after pushing for an Afghanistan surge, as well as expanded military operations in Yemen - not to mention a revamp of an intelligence bureaucracy now focused on better connecting the dots.)

Until then, the president probably can expect more of the same from a nation increasingly unsure about what's supposed to happen next.