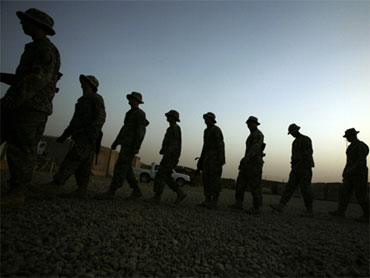 Max Boot is the Jeane J. Kirkpatrick senior fellow at the Council on Foreign Relations, a contributing editor to The Weekly Standard, and author most recently of War Made New: Technology, Warfare, and the Course of History, 1500 to Today.

President George H.W. Bush thought that after the victory in the Gulf war we had "kicked the Vietnam syndrome once and for all." How wrong he was.

The syndrome was on full display during the 1990s, when pundits and politicos rushed to compare American interventions in Haiti, Bosnia, and Kosovo, which resulted in no American casualties, to the worst military defeat in our history. Announced a military analyst in the Los Angeles Times on June 3, 1995: "If you liked Dien Bien Phu, you'll love Sarajevo--this policy is nuts." The analogy industry really hit overdrive in 2003 with the invasion of Iraq. "Echoes of Vietnam Grow Louder," a Newsweek headline ominously proclaimed on October 29, 2003. The next month, a New York Times article began, " 'Quagmire,' 'attrition,' 'credibility gap,' 'Iraqification'--a listener to the debate over the situation in Iraq might think that it truly is Vietnam all over again." Howard Dean certainly thought so. He told Dan Rather, "We sent troops to Vietnam, without understanding why we were there     and it was a disaster. And Iraq is gonna become a disaster under this presidency."

Iraq was difficult, but hardly an irretrievable disaster and certainly not a Vietnam-size disaster. After six and a half years of war, the United States has lost over 4,300 service personnel in Iraq--a sobering and substantial figure but still 13 times fewer fatalities than we suffered in Vietnam. Just as important, all indications in Iraq are that we are winning.

But, rest assured, a history of being consistently wrong has not deterred all those Boomers who came of age in the 1960s from once again evoking the specter of you-know-what to warn against involvement in Afghanistan. Actually the "Afghanistan as Vietnam" meme is hardly new. The late R.W. Apple Jr. of the New York Times notoriously wrote a front-page article with that very headline on October 31, 2001. In portentous Times-speak, Apple wondered:

"Could Afghanistan become another Vietnam? Is the United States facing another stalemate on the other side of the world? Premature the questions may be, three weeks after the fighting began. Unreasonable they are not, given the scars scoured into the national psyche by defeat in Southeast Asia."

He was right about one thing: The questions were premature. A few weeks later the Taliban government was toppled. Thereafter we were spared "Afghanistan as Vietnam" tropes until the comparison returned with a vengeance amid the Taliban's gains this year. Newsweek kicked things off with a cover article on February 1 on "Obama's Vietnam." More recently, retired general and erstwhile presidential contender Wesley Clark wrote in an op-ed in the New York Daily News, "The similarities to Vietnam are ominous." Senator John Kerry, who seems to mention Vietnam in every other breath (did he have some connection to the conflict, one wonders?), proclaimed on October 1, "The fact is that we've been through this before. You know, in Vietnam, we heard the commanding general on the ground saying we need more troops. We heard the president of the United States say if we just put in more troops, we're going to see the light at the end of the tunnel."

Barack Obama, however, hasn't been saying anything about light at the end of the tunnel. The president, who (mercifully) came of age after the Vietnam war, seemingly put the kibosh on these mindless comparisons on September 15 when he said, in response to a question, "You never step into the same river twice. And so Afghanistan is not Vietnam." Yet the evocation of Vietnam keeps cropping up among the president's aides and supporters, who warn, as E.J. Dionne did in an October 5 Washington Post column, that involvement in Afghanistan could harm the president's domestic agenda as badly as the Vietnam war harmed LBJ's Great Society. It has been widely reported that the "must read" book in the White House now is Lessons in Disaster: McGeorge Bundy and the Path to War in Vietnam by Gordon Goldstein, a study of the Kennedy-Johnson national security adviser and his role in the war. And a Times of London correspondent wrote on September 24 that "one senior official" in the White House, while speaking to him, "introduced the word 'Vietnam' into a discussion of Afghanistan."

Far be it from me--a military historian--to dispute the usefulness of history in policymaking. Properly applied, the study of past wars can be essential in guiding the course of current and future conflicts. But the key is to take lessons selectively and intelligently and not become enthralled by lazy reasoning along the lines of "Vietnam was an American war; X is an American war; therefore, X will be another Vietnam."

The Vietnam conflict featured a variety of factors that are absent in Afghanistan and Iraq. North Vietnam was a disciplined, one-party state with one of the world's largest and most battle-hardened armies. It had the legitimacy that came from a struggle against French colonialism and the support of two superpowers, China and Russia. Almost all of its resources from 1954 to 1975 were devoted to one goal--the annexation of South Vietnam. Given such a formidable foe, which was able to confront us not only with black-clad guerrillas but also with regulars riding tanks, the U.S. defeat becomes more explicable and less replicable.

The Iraqi guerrillas, Sunni and Shiite, were formidable in their own right, but they were no Viet Cong. Neither are the Taliban. They are more likely to engage in sustained firefights than were Al Qaeda in Iraq or the Mahdi Army, but they are incapable of maneuvering in battalion-, brigade-, or division-sized formations as the Vietnamese Communists routinely did.

Even company-sized attacks are rare in Afghanistan. The Taliban, like their Iraqi counterparts, prefer to strike with IEDs, which take little courage to plant. Although the Taliban, like the Viet Cong, enjoy cross-border havens, they do not receive anywhere close to the same degree of support from Pakistan that the Viet Cong got from North Vietnam. They don't even receive as much outside support as the mujahedeen did during their 1980s war against the Soviet Army in Afghanistan. Nor are they monolithic, as the Viet Cong were. The very term "Taliban" is a misnomer. It is used to describe loosely affiliated bands of insurgents who have no unified command structure of the kind that Hanoi imposed on its forces. Thus there is little danger of coordinated, countrywide attacks like the 1968 Tet Offensive.

None of the Afghan insurgent groups enjoys anywhere close to the prestige and legitimacy, either at home or abroad, that the Viet Cong were able to garner in their fight against first France and then the United States. Mullah Omar is no Ho Chi Minh. Neither is Jalaluddin Haqqani.

Are there nevertheless lessons from Vietnam that will help us fight the Taliban and other present-day foes? Undoubtedly. But the right lesson to draw is not that "we can't win." In fact, in Vietnam between 1968 and 1972 we did more or less win (a point elaborated by historian Lewis Sorley in his 1999 book A Better War: The Unexamined Victories and Final Tragedy of America's Last Years in Vietnam), but we failed to stick it out. If the United States had continued supporting Saigon with substantial aid after the signing of the Paris Peace Accords in 1973 to counter the aid Moscow and Beijing were providing to Hanoi, the likelihood is that South Vietnam would still exist--just as South Korea still exists.

The Vietnam experience demonstrates the importance of using sound counterinsurgency tactics based on protecting the population rather than the conventional "search and destroy" methods employed in the early years of that war, which resulted in massive casualties for both sides (as well as for civilians) and ultimately squandered America's commitment to continue the fight. Somewhat in the mold of General Creighton Abrams, who took command in Vietnam in 1968, General Stanley McChrystal has inherited a conventional war effort that he is determined to convert into a population-centric counterinsurgency effort.

The difference is that the Afghan National Army and the International Security Assistance Force are far smaller and less capable than their Vietnam war counterparts, the Army of the Republic of Vietnam and Military Assistance Command-Vietnam. Therefore implementing a counterinsurgency strategy will require more troops. If the White House agrees, it will be imperative to send a substantial number of reinforcements quickly rather than repeating one of the mistakes of the Vietnam days when Lyndon Johnson escalated gradually. That allowed the enemy to adjust to American tactics and made it impossible to wrest the initiative on the battlefield.

The Vietnam experience also shows the importance of not holding Third World allies to an impossible standard. The Kennedy administration helped overthrow Ngo Dinh Diem in 1963, and South Vietnam never had another ruler who was as strong or legitimate. That is a lesson worth keeping in mind as so many critics insist that progress in Afghanistan requires replacing Hamid Karzai, who is supposedly too discredited to help us win. New York Times columnist Frank Rich writes, for instance, that "Karzai, whose brother is a reputed narcotics trafficker, is a double for Ngo Dinh Diem." Let us hope he does not suffer Diem's fate. If the United States were to be seen as complicit in Karzai's removal, that would make it as difficult for his successors to gain legitimacy as it was for Diem's successors.

Another crucial point to take away from Vietnam is the importance of willpower in warfare. North Vietnam was much smaller than the United States, but its desire to prevail was much greater. If it is parallels to Vietnam that you seek, look at the wavering in the White House today. In some respects it is reminiscent of the Johnson and Nixon administrations, which showed themselves more interested in ending than in winning the war.

If President Obama ultimately decides not to make a serious and prolonged commitment to Afghanistan, he will be making the same mistake so many Democrats did in the early 1970s when they claimed that we could get out of Vietnam with no damage to our country or the region. We now know that America's defeat was a tragedy for the people of Southeast Asia, with millions of Cambodians slain in the "killing fields" and hundreds of thousands of Vietnamese "boat people" taking to the seas on leaky rafts.

It also did incalculable damage to America's standing in the world, encouraging our enemies from Tehran to Managua to step up attacks on our allies. It took us a full decade to recover, and even now we are still dealing with some of the fallout from that period, such as the Iranian revolution. The consequences of defeat in Afghanistan would undoubtedly be just as severe, if very different.

By and large, however, we would all be well advised to handle Vietnam analogies with great care and to focus on the specifics of current conflicts rather than making them fit a template that's more than three decades old. That is precisely what General McChrystal and his team of officers are doing. Their findings are based on a careful, on-the-ground review of the situation. Many of their critics, by contrast, seem to be driven by sixties nostalgia more than by an understanding of Afghanistan today.
By Max Boot:
Reprinted with permission from The Weekly Standard