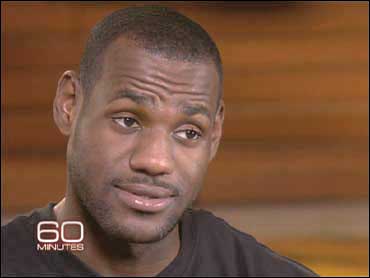 If you have never seen LeBron James play basketball, you have certainly seen him in television commercials or on the cover of national magazines.

According to no less an authority than the Harvard Business School, LeBron James is now the third-biggest name in the sports world, behind Tiger Woods and soccer star David Beckham, with earnings last year - on and off the court - of $40 million.

It already feels like he has been around for a long time, but he just turned 24 - a prodigy who's lived up to his hype

His team, the Cleveland Cavaliers, lists him as playing the position of small forward, which is a bit of a misnomer since he is big enough to be an NFL linebacker, only much quicker. He also wants to be the first billion dollar sports brand.

"What do people get when they buy into the LeBron James brand?" 60 Minutes correspondent Steve Kroft asked James.

The Quicken Arena in downtown Cleveland is literally the house that LeBron James built and where the Cavaliers superstar puts on the hottest show in the NBA.

For his opening act, he tosses a handful of chalk in the air - in a ritual that's become his personal trademark. It's his sixth season as a pro, and so far, his best.

He has continued to elevate his game from passing, to shot blocking; from his outside game to defense. Some are now debating whether he will become the best all-around player ever.

But when James is coming at you on the court, don't bother to "debate" - just get out of his way.

But of all the weapons in James' basketball arsenal, he thinks the most powerful may be his brain.

Asked what the strongest part of his game is, James told Kroft, "The way I approach the game mentally. I think, team first. It allows me to succeed, it allows my team to succeed. Because I'm always thinking about, 'How can I help my teammates become better?' I've always approached the game that way, ever since, I mean, I was a kid."

It's an unusual answer for a big time professional athlete. But then James is a smart, well-grounded young family man who is raising two boys of his own with his longtime girlfriend. Loyalty and togetherness are the threads that have held together his life, most of which has been spent within a 40-mile radius of Cleveland.

He was born, raised and still lives in Akron; it used to be known as the rubber capital of the world before the plants closed and moved away. Today it's known as the home of LeBron James.

"Just maintainin' baby. It's always a struggle growing up in Akron.
But we maintanin'," he replied.

James told Kroft he lived on "every side" of town, moving many times.

They were not the greatest neighborhoods, and he quickly learned a lot about life and survival, growing up in impoverished circumstances without a father.

Asked if he ever got in trouble, James said, "Never."

"Why, do you think? Lord knows there were lots of temptations," Kroft asked.

"Oh, absolutely. I don't know. I never walked down that path - I don't know why. I think the man above and my mother just led me in the right direction," James explained.

He told Kroft he gives his mother credit for that. "She get all the credit in the world for helping me become the man who I am today. Yep."

His mother, Gloria James, was 16 and unmarried when she had LeBron, and when her mother died at age 42, their situation became dire.

When things would get really bad, she would send him off to live with friends, usually one of his basketball coaches. But she was never far away. "I didn't reside in a steady home at the time. And I wanted him to, attend school until I could make our living situation better," she told Kroft.

Athletics were always his calling and school gyms his sanctuaries. A few months ago, Kroft went back with him to St. Vincent-St. Mary High School in Akron, so he could show his teachers and his high school coach Dru Joyce the gold medal he brought back from the Beijing Olympics.

"Are you any place even remotely close to your peak?" Kroft asked.

One the court, James spontaneously showed off his extraordinary skill, tossing a ball through the hoop from top of the key to the opposite basket.

"How many times can you do that in a row?" Kroft asked, laughing.

You could just tell he had done that many times here before, in a place where he made lasting friends and learned lessons that have endured.

"When did you first realize that basketball might become a vehicle for changing your life?" Kroft asked.

"Probably around the middle school days, you know 6th, 7th, 8th. That's one thing Coach Dru, my high school coach, and my AAU coach, a father figure to me, he always said. He said, 'Use basketball as a vehicle to get to where you want to go.' And I didn't know what that meant. You know, but now that I look back on it, I was like, 'Wow, you know, we didn't let the game of basketball use us, we used it,'" James said.

By the age of 12, he was traveling the country with the best schoolboys from Akron playing in AAU tournaments against national competition. Touted as one of the best sixth graders in the country, James was already being tracked by professional scouts. When it came time to go to high school, his team decided to go to St. Vincent's-St. Mary's together.

"So, you brought your whole AAU team," Kroft remarked.

"Most part, yup, for the most part," James replied.

And their coach also came to the school. They ended up winning a national championship.

By his senior year, ESPN was following his high school games, and showing his highlights on SportsCenter. Before he graduated, James' picture had already graced the cover of Sports Illustrated above the caption "The Chosen One."

Just a few months after being selected the most likely to succeed in his high school class, he signed a multi-million dollar NBA contract with the last place Cavaliers and a seven year, $90 million endorsement deal with Nike - the most ever paid to a basketball player. Another lucrative contract with Coca Cola laid the foundation for what James hopes will become a billion-dollar business empire. And it didn't take the enterprise long to begin paying dividends.

Three years after joining the lowly Cavaliers, he led them to the finals of the NBA Championship with one of the greatest clutch performances in history. He single handedly scored his team's last 25 points in a double overtime victory against Detroit.

"The game was so magical. I mean, I still watch it to this day," James told Kroft.

"No. You can't be afraid to fail. It's the only way you succeed - you're not gonna succeed all the time, and I know that. You have to be able to accept failure to get better," he replied.

Three years ago, James took one of his biggest risks ever. Deciding he wanted to control his own image, not just appear in other people's commercials, he stunned the sports world by firing his agent and starting his own company to handle his outside business interests with some of his childhood buddies from Akron.

Asked why he fired his agent and hired his friends, James told Kroft, "I just felt like in order for me to grow as the person that I wanted to become, as the leader, as the businessman, I had to, you know, make a change. Make something that I think could benefit myself and benefit the guys that was around me."

Two of his partners, Richard Paul and Randy Mimms, had no business background at all. And the then 23-year-old CEO Maverick Carter had only a marketing course and an internship at Nike to draw on. A lot of people, including the commissioner of the NBA, worried that it might be a recipe for disaster.

"Everyone said, 'What is he doing? Why would he give three of his friends, three young African-American guys…' - that's what they really wanted to say, right? - '…hand over his business to them at that level?'" Carter told Kroft.

They've been smart enough to surround themselves with some very good talent, hiring top account managers and lawyers, public relations people and publicists. It has won them credibility and respect in the sports business world.

"You got a lot of money. You stay healthy, you're gonna make a lot more money. You could just lay back and play basketball. Why is it so important for you to become successful in another area?" Kroft asked.

"Because I have that gift. You know, God gave me a gift to do other things besides play the game of basketball," James replied.

He showed some flair for comedy hosting Saturday Night Live; and his dance routine at the ESPY Awards two years ago made all the highlight reels.

But ultimately his goals will be achieved or denied on the hardwood floors of the NBA, and he is having his best season yet. He is second in the league in scoring, has had three 50-point games, and given the Cavaliers a chance to enter the playoffs with the best record in the NBA.

Asked if it's important to him, James said, "Very. It's one of the ultimate goals for me as a basketball player."

"How close do you think the team is?" Kroft asked.

LeBron James got that dream watching his idol Michael Jordan, while he was knocking around a recreation center gym. Jordan played until he was 40 and won six championships. James is just starting out. His favorite sound is still the swish the ball makes slicing through the net - and he's only 24.