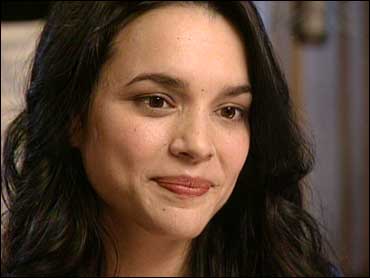 Norah Jones has sold more albums than any other female artist this decade, over 30 million. And she's only 27 years old. But success doesn't drive this low-key, talented singer.

In fact, it makes her uncomfortable—as Katie Couric discovered when she talked to Jones about the 2003 Grammy Awards, when many of us first saw the petite woman behind the unforgettable, seductive voice.

That evening seemed like the coronation of Norah Jones, when at age 23, she swept the awards.


It was a remarkable night. Her first album of romantic, dreamy ballads earned award after award, including "Best New Artist," "Record of the Year," and "Album of the Year." In all, she won a total of eight Grammys.

She and the album won in every category she was nominated in.

But Jones tells Couric she felt really bad about her sweep. "I felt like I went to somebody else's birthday party and I ate all their cake. Without anybody else getting a piece. That's how I felt.

A year later, her second album went on to sell 10 million copies, proving her success was no fluke.

Last month, 60 Minutes caught her in New York City, performing songs from her just released third album, "Not Too Late." The songs have the signature Norah Jones sound, but unlike her earlier albums, she wrote all the songs and says they're more honest, more personal and edgier.

"There's a little playfulness but there's also a lot of darker material on this album," Jones says. "And that comes less from me being a dark person than me sort of observing things going on around me and sort of turning them into songs."

Songs like "My Dear Country," which she wrote about two years ago, the day before the election. It's a political protest song that takes a jab at President Bush.

Asked if she was nervous she'd face a fallout similar to what the Dixie Chicks experienced, Jones tells Couric, "No. It's more of a personal song for me. It's more of, it's just a song about questioning what's going on and frustration. And I think that a lot of people will, would be able to relate to that feeling, especially from the past few years."

Quiet, slow songs are what first made Norah so successful, but some said they could put you to sleep – dubbing her "Snorah Jones."

"One critic wrote, after your first two albums, 'Jones' success is due to not being all that special. You can go to your local jazz club any night and maybe see somebody just as good. All the songs sound the same. There's nothing remotely experimental about them. The songs are, for the most part, fairly pedestrian,'" Couric tells Jones.

"Uh-huh. That's mean. Why would you say that?" asks Jones. "What I was going for in the first two albums I didn't necessarily achieve. Because I was young and because it was my first time out. And the second album was such a 'quickie' sort of 'Let's just get it over with!' But the kind of music I make, there's a lot of subtlety in it. And I think it takes a couple of listens to actually really get it. 'Pedestrian' is a mean way of saying simple."

"Or accessible," Couric points out.

"Or, they're very accessible," Jones says. "The songs on my new album aren't as accessible. But I'm more proud of them."

Norah says her musical roots are country and jazz, tastes acquired growing up in Grapevine, Texas, listening to her mother's eclectic record collection. An only child, she was raised by a single mom, who sacrificed to give her daughter every opportunity.

Norah's father is the famous musician, Ravi Shankar, the virtuoso Indian sitar player. "I knew who my dad was," she says. "I saw him sporadically until I was nine and then I didn't see him again or talk to him until I was 18."

Shankar never married her mother – their relationship, Norah says, was complicated and it ended when she was young. Her mother, she says, didn't want her talking about him.

Jones acknowledges it was kind of a secret. "You know, when you have a father who's pretty well known but you don't see him, the last thing you want to do is start talking about him all the time to people," she says.

When Norah turned 18, she sought out her father, who was living in California with his daughter and second wife.

Asked if she was angry or sought an apology from her father when they reconnected, Jones says, "Yeah. I might have. I might have wanted that."

Today she says they are close.

"Do you consider yourself part Indian?" Couric asks.

"I grew up in Texas with a white mother," Jones says. "I feel very Texan, actually and New York. New Yorker."

Norah Jones moved to Greenwich Village when she was 20 years old. "It's a cool neighborhood to live in. When I first moved here, I actually moved to a little street called Jones Street," she remembers.

She waited tables and got gigs singing and playing Jazz standards in small clubs.

In less than a year, her musical career took off when an accountant for Blue Note Records came to hear her perform. She was signed and put out her first album, which she hoped would ultimately sell 10,000 copies. It sold over 20 million.

"You've sold more records this decade than any other female artist in America. And you did it between the ages of 22 and 24," Couric points out. "And yet you say those were the worst years of your life."

"They were, kind of. I wasn't my happiest," Jones says.

Her unexpected success plunged her into a relentless, three year whirlwind of touring and promotion.

She says she was overwhelmed and cut back. One thing Jones did was nix a remix of "Don't Know Why," saying, "It was just kind of silly."

"That's pretty unusual though. Because a lot of people, say 'Hey this is my moment. I'm going to take advantage of it,'" Couric remarks.

"At the time? It had already surpassed my wildest dreams. And I said, 'You gotta slow this thing down.' You know. 'I'm dying here.' I just, I was really just afraid of being overexposed. And overdoing it," she says.

In the spring of 2005, she took herself out of the spotlight and began performing in disguise. In one performance, she donned a blonde wig, singing with the all-girl band, "El Madmo."

"We wear wigs 'cause it's just fun. And we didn't want anybody to judge us, you know. So we wanted to be more anonymous," Jones says. "We wanted to be able to just try something out for fun, for the fun of music, you know. We ended up just enjoying the dressing up part, as much as the band part."

And then there's "The Little Willies," the country band she plays with, named after her idol, Willie Nelson.

"When I moved to New York, I fell head over heels back into country music and probably 'cause I missed something about Texas," Jones says.

Norah's bands are made up of a close-knit group of longtime friends, including her boyfriend of seven years, bass player Lee Alexander. They're songwriting partners and he produced her latest album.

Norah Jones is completely uninterested in the trappings and hype of high profile celebrity. She doesn't dress provocatively and has made no attempt to "sex" up her act.

She's unpretentious and unaffected, as Couric found out when she took 60 Minutes to her favorite pool hall in the East Village.

"I like coming to places like this because they usually have a great juke box," she says.

Asked if people come up to her and bother her when she is out and about in public, Jones says, "No, not really. It's fun to go out and play pool when we're on tour."

Norah Jones says she doesn't know where her career will go from here and believe it or not, she doesn't really care.

"I don't expect to sell millions of records every time. I just don't think that's gonna be possible. I think that's a lucky thing that happens every once in a while," she says. "I feel like I've had my cake and I've eaten it and it tasted great. And I don't need another piece."