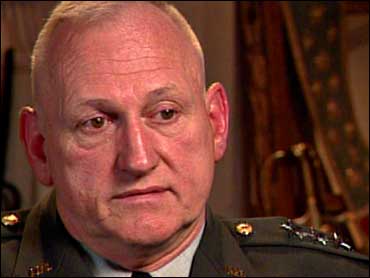 Lt. Gen. William G. Boykin is a devout Christian who has probably seen as much combat as anyone in uniform.

Yet he's been called a national embarrassment, a religious fanatic and a three-star bigot – all because of what he said about the religion of a Muslim warlord.

His words set off a torrent of criticism from Muslims around the world, and demands at home that he be fired from his high-level job as undersecretary of defense for intelligence.

Now, this holy warrior speaks about the controversy for the first time with Correspondent David Martin –- but he says he's not happy about it.

Boykin has been portrayed as an anti-Muslim zealot because of what he said while preaching to a Christian congregation about how his faith in God sustained him in battle.

The churches videotaped and distributed Boykin's speeches, and it wasn't long before his personal testimony became public controversy. One story he told about chasing warlords in Somalia 10 years ago came across as belittling the Muslim faith.
This is what Boykin said about one Somali warlord who believed Allah would protect him from being captured by Americans: "I knew that my God was bigger than his. I knew that my God was a real God and his was an idol."

Muslims reacted with outrage from that one statement. Boykin's response?

"Let's go back to the day that we captured Osman Atto [the Somali warlord]. He was a corrupt, evil warlord who was stealing from and robbing his own people. He's a man who worshipped graft, corruption, power and money," says Boykin. "My reference to his God being an idol was not to Allah. My reference was to his worship of corruption, of power, of money. He was a thug. He was not a good Muslim."

That may have been what Boykin meant by his statement, but the words "my God was bigger than his" are what everybody heard, and they went off like a bombshell, just when the United States was trying to convince the Muslim world that the war against Islamic terrorists had nothing to do with religion.

Was he trying to make it seem like his God was against theirs?

"No, that's not what I meant at all. Look, I'm a Christian. I make no apologies for that," says Boykin. "But I'm also not foolish enough to deliberately offend or in any way ostracize any religion. ... I'm not anti-Islam, I'm not anti-Allah."

Does he believe Allah is a lesser God than the Christian God?

"I'm not going to go into that," says Boykin. "I'm a Christian. That speaks for itself."

Boykin is a fundamentalist Christian who prays over every significant decision in his life, including whether or not to do this interview.

"I wake up every morning about 4:30 a.m., and I pray for about a half hour and I pray again before I go to bed at night," says Boykin. "And during the day, I take opportunities to pray."

Did he see God's hand in the election of President Bush? "Absolutely," he says. "And Bill Clinton and others. I believe that our leadership is placed there by God."

But President Bush received so much heat about Boykin from Muslim leaders that even he took a shot at the general: "Gen. Boykin's comments don't reflect the administration's comments. … He doesn't reflect my point of view."

"That was a painful moment, but I put it in perspective," said Boykin of Mr. Bush's comments. "What the president heard was what was portrayed in the media. The president didn't hear my presentation."

Boykin tried to end the controversy by asking for an investigation by the Pentagon's inspector general. Ten months later, the investigation concluded that he had violated department regulations by failing to clear his comments in advance.

The secretary of the Army is expected to issue Boykin a letter of concern, which amounts to nothing more than a mild slap on the wrist. That closes the investigation, but doesn't address the central question of whether a senior officer, wearing his uniform, should speak so openly about his faith. And that leaves the controversy right back to where it began when this self-described holy roller took to the pulpit.

Why did he start speaking to church groups? "I was asked to come and talk to Americans, many of which had their sons and daughters mobilized and involved in this war," says Boykin. "So my purpose was to be an encouragement to Americans while we were at war."

In churches all across the country, Boykin told riveting stories of how God sustains Americans in battle. "Before we launched that first mission, we all prayed 'God go with us. God keep your hands on us,'" said Boykin in one speech.

He tells the congregation that when he was a young captain, God actually spoke to him, telling him to join the Army's elite Delta Force: "There are times when God speaks to you in an audible voice. He spoke to me that morning because I said, 'Satan is gathering his forces.' He said, 'Yes, son, but so am I.' And I knew I was to be there."

Boykin has been on the front lines of the battle against radical Muslims for a quarter of a century, ever since Islamic revolutionaries seized the U.S. embassy in Tehran and took Americans hostage. He was one of the Delta Force commandos who went in to rescue them. The mission ended in failure on a remote desert airstrip when a helicopter ran into a transport plane full of soldiers.

"It was a huge ball of fire. They could not survive," recalls Boykin.

It was a disaster military, but in Boykin's telling, it was also a miracle: "That aircraft was going to explode any moment. But as I prayed in the name of Jesus, the door of that aircraft opened and through those flames came 45 men running just as hard as they could."

That's not just a war story that gets better with each retelling. It's exactly what happened. Logan Fitch was one of soldiers trapped in the back of the plane.

"I could see the flames and the fire and the sparks advancing from the front to the back of the aircraft, inside the aircraft," says Fitch.

Does Fitch view that as a miracle, that everyone got out of there without any burns?

"These are some amazing guys," says Fitch. "If I had to attribute it to anything, I would attribute it to the self -- the training and the self confidence and the cool actions of all of us."

Boykin says that when he saw the helicopter go into the plane and saw the fire start, he looked up and said, "In the name of Jesus, spare these men." He believes that his prayer was answered.

"Well, it was," says Fitch. "Whether it's directly attributable to that prayer, I don't know."

Boykin's message, repeated again and again, is that prayer saves American lives. For example, some of his men walked away from a horrific helicopter crash that was captured on home video during the invasion of Grenada in 1983.

But then came the 1993 firefight in Mogadishu, made famous by the film "Black Hawk Down." At that time, Boykin was the commander of Delta Force. He lost 16 of his men; many more were wounded.

"We brought a truck outta that city and brought it back home to that air field. A 5-ton truck, and we had it stacked with bodies, dead and wounded," said Boykin in a speech. "My soldiers. And we dropped the tail on that truck and the blood poured out the back of it, like water."

The next day, Boykin survived a mortar round, which killed one of his men and left another bleeding to death. Boykin prayed over the dying soldier. "There was no pulse. There was no pressure. But I prayed to almighty God, spare him," said Boykin in his speech. "Today, he practices medicine in the Shenandoah Valley with four children."

That dying soldier was Rob Marsh, who served as Delta's battle surgeon. "I required 17 units of blood and it's, normally there are 15 units in a body," recalls Marsh. "If things hadn't happened the right way, I shouldn't be here right now. I think the skill of the surgeon, the blood, you know, and God's will, I'm here."

But many of Boykin's men didn't make it out of Mogadishu, and Marsh thinks Boykin's preaching was a way of dealing with the trauma. "It was therapeutic for Jerry Boykin to give the talk that he gave because it's a way to let the pain out, and also a way to share his faith," says Marsh.

Faith has always sustained soldiers on the battlefield, but Boykin's faith at times is startling. He tells church audiences in one speech that the devil showed up in a photo he took in Somalia: "It is a demonic spirit over the city of Mogadishu. Ladies and gentlemen, that's not a fake, that's not a farce."

Did Mogadishu turn Boykin into a fanatic? "Well, I don't think I'm a fanatic," says Boykin. "And I think most of the people who've served with me would probably tell you I'm not a fanatic."

Although Boykin would lead the Delta Force in prayer before every operation, the soldiers who served with him say they didn't see anything unusual about his faith.

"He didn't go around proselytizing or preaching or anything like that," says Fitch. "I simply knew that he was a devout person."

After Mogadishu, Boykin's marriage ended and he nearly hit rock bottom. He said that he was so miserable that he asked God to take him.

"There was a point at which I probably would have preferred that over having to get up and face the situation that I was in every day," says Boykin.

What turned life around for him? Boykin, fighting tears, points to his second wife, Ashley. "My wife," he says, "she picked me up."

"You know, you may not wear your religion on your sleeve but you wear your emotions on your sleeve," Martin says to Boykin. "I think most people would have this image of a Delta commando has a tough, macho guy, and you clearly are tough and macho, but you have this side of you in which the emotions are just right there beneath the surface."

Boykin no longer speaks in church. But that hasn't stopped calls for his resignation. He insists he's not about to quit.