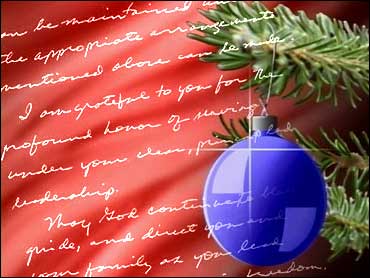 'Tis the season for my second annual selection of excerpts of Christmas Letters From Famous People That You Might Not Have Received.

From Janet Jackson:
Well, it's been a challenging year, to say the least. But I never got too sad or depressed. I remained the optimist that I always am. You see, I'm the kind of person who looks at life as the bra being half full ...

From Barry Bonds:
WHY DO PEOPLE KEEP THINKING THAT I'M ON STEROIDS???

From John Kerry And Teresa Heinz Kerry:
JOHN: Teresa and I are writing this letter together because we are a team.

TERESA: We're not a team. I'm my own individual.

JOHN: And that's why I love her. Anyway, it was a difficult year, but one I'm very proud of. I wouldn't have done anything differently.

TERESA: You mean you're happy you lost?

JOHN: Maybe if you stopped interrupting, I'd be able to make my point.

TERESA: Go ahead. Make your little point. Politics is silly anyway. I have many more important things in my life.

JOHN: What I'm trying to say is that we fought the good fight, we didn't get down in the mud, and I never had to resort to actually having a platform or taking any positions.

TERESA: I think you would have won if you had let me talk more.

JOHN: And that's why I love her.

From President Bush:
This is a time for reflection and gratitude. Looking at my reflection in the White House bathroom mirror, I am grateful. I'm grateful that the country has had such a good year. I'm happy that the war in Iraq is such a success, despite people being killed every day. I'm happy that our economy is such a success, despite its now being controlled by China and Japan. And of course, I'm happy that I had such a huge victory in November, beating the opposition by almost 2 percent. It was also a year of surprises. To tell you the truth, I didn't even know that Jeb was also Governor of Ohio.

From Colin Powell:
Yeah! I'm out of there. Merry Christmas to all!

From Aleta St.James: (the 56-year-old woman who had twins)
I've been so busy, I barely have time to write this holiday letter. As the whole world knows, I received a double blessing this year. Not surprisingly, my two bundles of joy have changed my life. Now that things have settled down a bit, I only have one question -- What was I thinking?!

From Donald Trump:
This is my favorite time of year, because I can buy anything I want. Of course, I can do that all year long, but this season reminds me of just how rich I am. And who cares if you don't like my hair? Of course, I have a hit TV show, but in case you haven't noticed, I'm also doing some TV commercials. I'm not doing them because I need the money, but because I want to share my personality with as many people as possible. Before this year, I never thought my life could get any better, but it sure has. There's nothing I can't do. In fact, there are just a few words I'd like to say that sum up my feelings about the Christmas spirit: "Santa Claus, you're fired!"