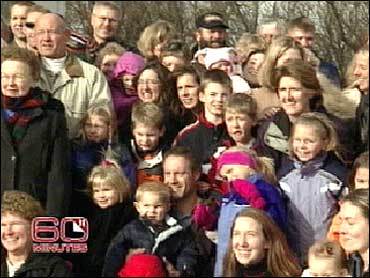 For years, doctors have been searching for a genetic cause of heart attack with minimal success – until now.

Doctors at the Cleveland Clinic believe that a big family from Iowa, the Steffensens, may hold the key to stopping heart disease in its tracks.

Generations of this family have fallen victim to heart disease. They assumed it was due to diet and exercise. But this past week, doctors at the Cleveland Clinic reported they discovered something unique about the Steffensens -- something that had never been found, but long suspected.

The Steffensens, it turns out, have a heart attack gene. The gene doesn't merely increase their risk of a heart attack. It's an absolute guarantee.

It's a groundbreaking discovery that will affect a lot of things about heart disease, and eventually allow treatment to begin many years before the disease actually sets in. Correspondent Mika Brzezinski reports on this new medical discovery.

The Steffensen clan gathered for a Thanksgiving reunion this past weekend at the family farm in Buffalo Center, Iowa. It's where generations of Steffensens have lived and farmed.

Today, they range in age from 6 months to 80 years. There is a strong family resemblance that reveals itself when the family gathers together. The Steffensens have light eyes, easy dispositions, and a remarkable number of cases of heart disease.

The legacy of heart attacks began with patriarch Arthur Steffensen and his wife, Zilpha. Their youngest son, Marvin, recalls vividly the day his 45-year-old father literally dropped dead of a heart attack: "I was a passenger in the front seat with him when he slumped over the front driving side of the car…You don't forget those things."

"It was hard to believe at the time, because like I felt dad was kind of indestructible," adds brother, Don, 74, who said the loss of his father devastated the family.

Years later, history nearly repeated itself when Don was duck hunting with friends and suddenly, his heart gave out.

"I couldn't push the boat anymore, and I sat down and then I got real sleepy, so they pushed me over to the bank and got me out on the bank. I put my arms around two of them and they took me to into the hospital," recalls Don, who said the doctors didn't even want to operate on him. "They said there wasn't anything they could do about it."

Don was hardly the only member of his generation to suffer from heart disease. Incredibly, almost every single one of his 10 brothers and sisters did, too.

"I think pretty much the entire family thought it was probably our way of life," says Don, who believed there had to be something else -- another reason why so many of his relatives had bad hearts.

Last year, he went to the Cleveland Clinic for help -- and his timing couldn't have been better.

Dr. Eric Topol, chairman of cardiology at the Cleveland Clinic, was looking for a big family to study. Like others in his field, he was searching for a gene that causes heart attacks, and a big family with heart disease could help him find it.

While Don was visiting the Cleveland Clinic, he happened to mention to one of the cardiologists there that he had 10 other siblings, of whom nine had heart attacks.

"It's actually very striking. You look at their hospital records, the heart attack, when they had a heart attack -- 61,61, 61, 61, 62, 62, 63 and 59," says Topol. "Typically, heart attacks occur in the mid 50s to 60s, but to see the clustering almost at the same age among the family was another strong signal that this was a genetic story playing out."

For Topol and his team, the Steffensens were the perfect family to study.
There was rampant heart disease in the same family, and lots of heart attack survivors willing to give their blood so their DNA could be examined.

The older generation alone was a windfall -- with so many brothers and sisters, including 72-year-old Betty and 76-year-old Elayne, who's had three heart attacks.

Don convinced practically all of his siblings to participate in Topol's research. And the Cleveland Clinic team of 50 researchers spent more than a year sorting through billions of bits of genetic information from each Steffensen.

By comparing the family members with heart disease, to the lucky few who never got it, Topol hoped they could find the gene causing the problem.

This week, they announced a breakthrough. Topol's team discovered a spot which turned out to be a genetic defect. What did that spot in the Steffensen family reveal?

"It was fascinating," says Topol. "Because it was a protein that no one ever knew had anything to do with heart attacks and heart disease."

This significant discovery was published in this week's Science magazine. Topol and his team found a defective gene which creates weak artery walls. Eventually, in later years, a protein from that defective gene causes the artery walls to crack, setting the stage for a heart attack.

Topol found the defective gene in every Steffensen who has heart disease.

"Even though this may turn out to be a rare condition, it really sets the stage for unraveling the other key genes that cause heart attack and coronary disease," says Topol. "So in that regard, it's really exhilarating."

Now, with a simple blood test, Topol can identify this gene in the youngest Steffensen family members. And those who have it need to be extra careful about things like cholesterol and high blood pressure, which are known to encourage heart disease. It's also especially bad for the Steffensens' already vulnerable hearts.

Topol says the gene may be unique to the Steffensen family, but it's more reason to believe that it all starts in the genes: "That's what causes heart attacks, not the cholesterol per se. So in many ways, there's been a misguided sense of what was going to be the basis of heart attacks."

This week, the original Steffensen siblings were given the news. And it turns out that they all had the gene but one -- Betty. And that didn't surprise her sister, Elayne.

"Before this research started, I said, 'You know, Betty is never sick. There's something going on with her,'" says Elayne. "And I knew there was something special because she wasn't sick."

In the last few weeks, Topol's team has taken blood from more than 50 Steffensen relatives -- all of whom have plenty of questions about what this means to them.

Last weekend, they cheered when 60 Minutes II brought Dr. Topol to the reunion at the local church in Buffalo Center, Iowa -- where Topol and his daughter, Sarah, one of the co-authors of the study, answered questions.

Topol also delivered some sensitive test results to relatives who gave blood. Paul, 49, had heart surgery three years ago. He got his answer from Topol himself, and the results raised new concerns about the future of his family's health.

"I suspected all along that we did have it," he says. "Hopefully, I didn't pass it onto my kids and my granddaughter."

His 51-year-old cousin, Neil, discovered that he didn't have the gene. "I went and drank a beer," he says. "I was kind of relieved. Just kind of a weight lifted off, you know?"

Corey, 35, refused to participate in the study. He didn't give blood and he said he didn't want to know if he was destined for heart failure: "I really do not wanna know that I'm carrying the gene around with me. Finding that out and then having my kids tested, is that something I wanna live with the rest of my life? It's kind of a scary feeling."

The Steffensens now have more information than perhaps anybody in America about their chances of getting a heart attack. But that information can be a mixed blessing, because the ability to know about the gene can create other problems as well.

Ron worries that insurers may refuse to cover him, even though he doesn't know whether or not he has the gene. One grandson, Tony, doesn't know either, but he worries about job security because he's a pilot.

On the positive side, the ability to know this information will allow the Steffensens to get preventive medicine and watch their diet and exercise.

The test certainly brought relief for Elayne, who got her own results along with her son's. The bad news is that she has it. But the good news is that her son doesn't.